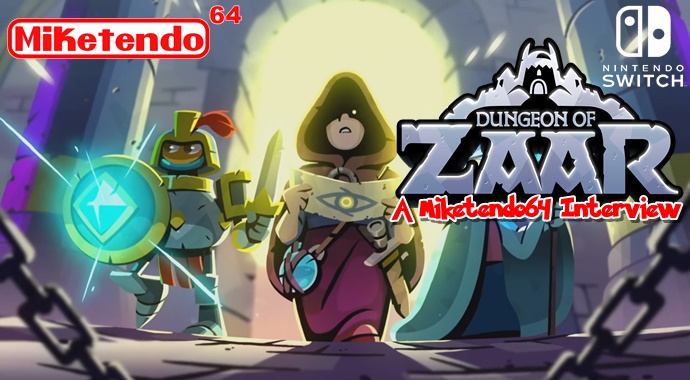 Noé Lecombre: A Miketendo64 Interview (An Introduction to Dungeon of Zaar)

Ever hear of a game called Dungeon of Zaar? It’s an online turn-based strategy game that is being developed for PC/MAC/Linux. Dungeon of Zaar is slated to release on this platforms next year having reached its goal on Kickstarter and you know what else? It’s coming to the Nintendo Switch as well!

Here at Miketendo64, if an indie game is coming to a Nintendo platform, naturally we want to know more about it, so we got in touch with the guys behind the game, asked a few questions and got some answers from Noé Lecombre in return! Brace yourselves, for this is our Dungeon of Zaar Q&A:

And then There were Three:

Miketendo64: “Before we even start talking about the game, let’s talk about the guys behind the game for the moment. Who are you and how did you come together?”

Noé Lecombre: “Well, I’m Noé Lecombre. I am in charge of art and game design for Dungeon of Zaar and I come from the animation industry! I work with Vincent and Cléry, both of whom are awesome game developers finishing their studies at Epitech!

Dungeon of Zaar started as a table top game a few years ago, and I thought that it was better suited for a video game, I started making video mock-ups of it and showed it on Facebook, Vincent contacted me and he started coding the project with another game dev found previously on Facebook. Clery joined the team later on.”

Miketendo64: “And now we can start talking about the game. For anyone who has never heard of Dungeon of Zaar, it’s actually one of the first indie games we know by name that is headed to the Nintendo Switch. Where did the inspiration for Dungeon of Zaar come from?”

Noé Lecombre: “Dungeon of Zaar is a PvP tactical strategy game with fast-paced combat, what I wanted to do as a true PvP tactical centred around team building. Fast battles and not targeting exclusively T-RPG fans, but a wider audience who might have never played a single Trpg before.

As for the game’s inspiration , firstly it comes from Final Fantasy Tactics, but also games like Advance Wars, Pokémon, Warhammer and Magic the gathering.”

Miketendo64: “Currently your planned release month is June 2017 (later for the Nintendo Switch), how much of the game would you say is finished?”

Noé Lecombre: “We should have about 30% of the game content done by now, and we hope that we’ll be able to deliver the game by mid 2017 for the PC/MAC version. We’ll have more information regarding the Switch version closer to the end of the development and we’ll keep you informed!”

Miketendo64: “Besides the Nintendo Switch, are there any plans of bringing Dungeon of Zaar to any other home console platform such asPlayStation 4 & Xbox One?”

Noé Lecombre: “Right now we are only focusing on PC/MAC/Nintendo Switch and maybe Tablets. The PS4, Xbox One versions might come one day, but it’s not for now!”

Miketendo64: “As a team of three, how much of the game is your own work and how much of it has been the influence of your colleagues?”

Noé Lecombre: “For the art (animation, character design, UI, backgrounds) I do everything by myself. For the game design part I usually come up with ideas and I talk with Vincent and Cléry about those choices. It’s important that we all agree with the decisions so we can make the best game together. If you only listen to yourself there is a strong chance that you will make the wrong choices at some point, lacking a wider vision and different point of view on the project.”

The Lore of Dungeon of Zaar:

Miketendo64: “Can you tell us any more about the Lore of Dungeon of Zaar?”

Noé Lecombre: “This is a brief version of the Lore:”

“On the edge of a magical world, awaits the Dungeon of Zaar, home of the great, eponymous Archmage. Over a century has passed since his last appearance, and now all eyes are on the Dungeon, eager to claim a share of the spoils within.

You are an Explorer, leading a team of mercenaries (Knights, sorcerers, and monsters of all kinds) to plunder whatever treasures are hidden in the depths of the Dungeon. But beware! You are not the only one who has had the same idea…”

Noé Lecombre: “We hope that you’ll be able to learn more about Zaar and the Dungeon when the game is released!”

Miketendo64: “Looking forwards to it!”

Miketendo64: “You’ve done a great job of keeping us informed on the Kickstarter page with that we can do in the game, but have there been any ideas you tried implementing, but just didn’t pan out?”

Noé Lecombre: “In the game we tried so many things, and we will still try new elements to make the experience better and funnier. For example at a certain point in the development, your characters automatically respawned after their death on “respawn tile,” while right now there is no way you can revive any of your troops!”

Miketendo64: “What have been your worst and favourite moments during Dungeon of Zaar’s development?”

Noé Lecombre: “The best moments are always meeting players, hearing their feedbacks and talking to the ‘fans.’ It really encourages and reaffirms our faith in the game.

The worst in often facing a big technical issue in the game. We have to scratch our heads and come up with solutions and sometimes we have do things differently. Some things may appear simple but they are not! And an expected 2 hours of work can end in 3 days of pain!”

Miketendo64: “On to happier things, if you had the opportunity to do a retail release, is this something you’d pursue, or would you rather keep the game solely as a digital title?”

Noé Lecombre: “As a Nintendo fan and a game collector, of course I would love to do a retail release of DoZ (DoZ = Dungeon of Zaar)! I am craving to see the new Nintendo Switch game cases!”

Miketendo64: “Now that you mention it, neither can I!”

The Mercenaries of Dungeon of Zaar:

Miketendo64: “On your Kickstarter page, you’ve written you “aim to offer at least 15 mercenaries” when the game releases. How many mercenaries have you got so far?”

Noé Lecombre: “At the moment we have 9 mercenaries. For the first mercenaries in the game we aimed to offer strong archetypes that will be the “pillars” of the game. We have tanks, damage dealers, healers, and more complex “control” characters. We want to offer a large panel of choices and combinations, so players will be able the build their team the way they want and try a lot of different tactics. We are going to add more “classic” archetypes such as assassins and invocators for example, but we’ll also try to have original mechanics and fun fresh ideas!”

The Maps of Dungeon of Zaar:

Miketendo64: “And what about the maps? So far you have 4 out of 8 maps for the ‘map events,’ finished. Can you tell us anything about the map you’re working on now?”

Noé Lecombre: “Yes we have 4 maps in the game right now with different mechanics: A draw-bridge, fire tiles, power rune, and teleportation tile, and we have cool ideas for the upcoming ones. We have some interaction ideas but nothing is for sure so we’ll give you more details soon!”

Dungeon of Zaar Could be Supported with DLC after Release:

Miketendo64: “Although it is too early to ask, but after Dungeon of Zaar, are there any plans to work on something else you’ve previously discussed?”

Noé Lecombre: “I really wish to continue working a little on Dungeon of Zaar after the release, adding new characters, game modes and cosmetic stuff to make the game an even better and complete experience, although that will depend on the success of the game! But otherwise we don’t have plans for another game after DoZ right now.”

“Metroid on the Switch would be Neat!:”

Miketendo64: “Last question on our list; Other than Dungeon of Zaar, what games are you most looking to seeing released next year?”

Noé Lecombre: “I am really curious about The Last Guardian on PS4, I am also curious about Resident Evil 7 and everything regarding VR. And of course I am craving for Nintendo Switch exclusive titles. Hoping for a WarioWare/Nintendo Land experience on the Switch with neat multiplayer gameplay, and of course a new Metroid or F-zero entry, but time will tell.”

Miketendo64: “Metroid on the Switch is a must! As for a WarioWare styled game? Now that would be something!”

Dungeon of Zaar may only be at 30% completion, with a intended initial release 8 months away, but a lot of work has gone into the game already and it is paying off as DoZ does look good and as an Indie title we can expect to see on the Nintendo Switch, it is one of the titles Nintendo gamers have to get, along with FDG Entertainment, Zoink! Games and Image & Form’s Nintendo Switch offerings! And since I’ve said enough, it’s back to Noé for the final word, a message for the fans:

“We are really glad that we succeeded on Kickstarter, and really happy that we can continue working on Dungeon of Zaar to release an awesome and new strategy game experience for 2017! Thank you all for your support!”