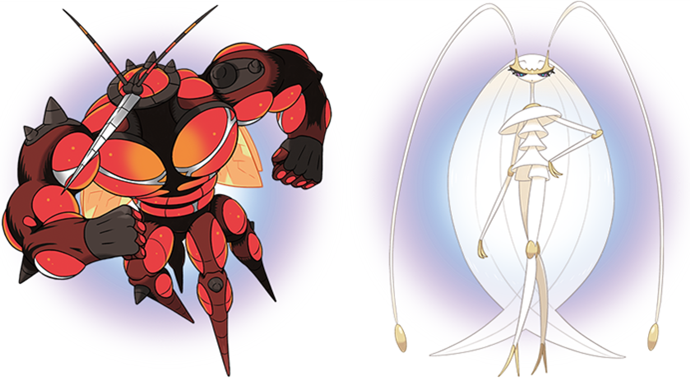 Since last week’s reveal concerning the Aether Foundation and Ultra Beasts, a lot of us were hugely looking forwards to today’s Sun & Moon reveal, but it turns out it wasn’t the reveal we had hoped it would as there was no trailer and only a slight bit of new information on the two Ultra Beasts we saw revealed in CoroCoro earlier this week.

But before we even go over what little was revealed, first let’s talk about the good news, there will be another reveal next week, on the 20th of September and it has been said there will be a trailer and more news than what we got today. The reveal will happen at the following times:

Now as for today’s reveal, it comes in the form of new information posted on the official Japanese Pokémon website, and is essentially a repeat of some of the information we got from CoroCoro. It reconfirms the Ultra Beasts names and states that the muscular Expansion is a Pokémon Sun exclusive and its proboscis is tougher than diamonds, whereas the gorgeous Beauty is exclusive to Pokémon Moon and is faster than lighting. There’s also plenty of new screenshots (6) regarding the two.

Below you can find the Serebii translated description for the two Ultra Beasts:

“Has a body that’s a deadly weapon to match its name. UB-02 Expansion’s proboscis is stronger than diamonds.”

“Just like its name implies, it can use its beauty to charm all Pokémon. Regardless of gender, it can eliminate its opponent’s desire to fight. UB 02 Beauty is said to be fast enough to out run lightning.”

Given as how the “new” information can only be found on the Japanese site, we’re expecting next week’s reveal to be a trailer mostly centred around these two Ultra Beasts and the different versions of Rockruff’s evolved form. If there is additional content shown, it would be a welcomed surprise after the latest reveal dashing our hopes this week, but whatever does get revealed, you can be sure to see it all right here at Miketendo64.