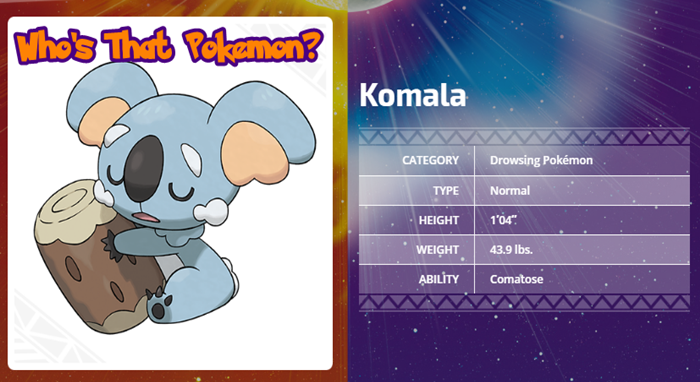 For every day that passes, is another day we move closer to the release of Sun and Moon and the closer we get, the more Pokémon we get to learn about. This is “Who’s That Pokémon?” A series of posts regarding the Pokémon we can expect to see in the upcoming games. From Rowlet to Magearna, we’ve covered them all, but now with the latest batch revealed, it’s time for some more additions of Who’s That Pokémon? and in this particular post, it’s all about Komala!

Description: “No one has ever seen a Komala awake. It eats, travels, and even battles while sound asleep! Its saliva can be used as medicine for the sick or sleepless, according to ancient people. They say if you take a small amount of the saliva remaining after it eats leaves, water the saliva down, and drink it, you’ll be able to sleep well.

Komala clings to a log pillow that its parents have given to it. Once it has grasped this log, it almost never releases it. If it does lose hold of its log, the Pokémon will be unable to sleep well and will thrash about wildly. Apparently it will sometimes cling to the arm of a Trainer it trusts.

Komala has the Comatose Ability, a new Ability that no other Pokémon has ever had until now. This Ability keeps it perpetually in a drowsing state, which prevents it from getting any other status conditions.”