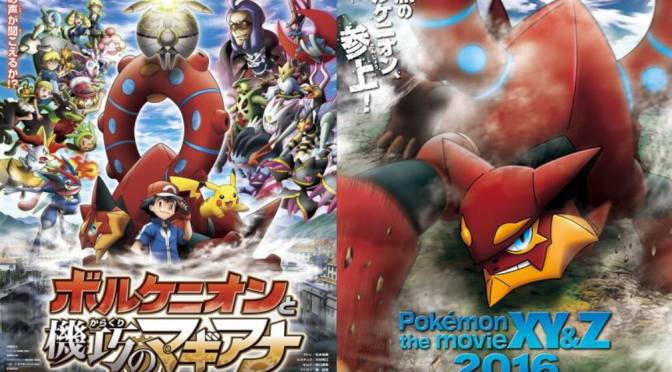 In March it was said CoroCoro’s April edition would feature some information regarding as Pokémon Sun & Moon reveal, but it never happened. Then we were promised the same for this month and that this time it would be a big scoop, but again, it never happened.

Instead, if you are hoping for some huge Sun & Moon revelations, you’re going to have to wait for next month’s issue, but CoroCoro Magazine promise it will be good because they will be the Pokémon main source of news. It would have been great to learn a little more about the starters and their evolved forms, but for now we will just have to wait. On another note, CoroCoro did feature the upcoming Pokémon movie, Volcanion & The Ingenious Magearna, in the form of new art for the film.

This wasn’t quite the Pokémon movie reveal the rumours would have us believe, but although a bunch of images does seem a bit of a let-down, but at least we can take comfort in the fact that the 19th instalment of the film releases next month in Japan, on the 16th of June, so even if we don’t hear more about the film or Magearna before then, we certainly will afterwards. Below you can find both the plot to the film and a trailer:

“On his way to becoming a Pokémon Master, Ash and his companions continue on with their journey. But suddenly, a large mass enveloped in white smoke descends from the sky and lands in front of the group. Surrounding the area with white smoke, a figure emerges… It’s the Mythical Pokémon, Volcanion.

Coming from the remote Nebel Plateau, Volcanion lives with Pokémon harmed by humans, and thus holds great distaste towards them. Ignoring the concerns of Ash and his friends, Volcanion immediately tries to leave, but a mysterious force binds Volcanion and Ash to each other. Finding themselves unable to separate, Ash is dragged along as Volcanion continues on its mission.

In a city where large cogs and gears run continuously, a corrupt minister of the Azoth Kingdom has obtained the ultimate invention: the Artificial Pokémon Magearna. Magearna was created 500 years ago and since lost, until the minister found and kidnapped it from the Nebel Plateau. The minister plans to use Magearna’s mysterious power of its “Soul Heart” to take control of the mechanical kingdom.

Can Ash and Volcanion work together to rescue Magearna? What power does Magearna’s Soul Heart hold? Set in a mechanical kingdom of machinery, one of the greatest battles in the history of Pokémon begins to unfold!”

However should there be any new Pokémon movie and Sun & Moon news to come out any time soon, you can always expect to see it here on Miketendo64.