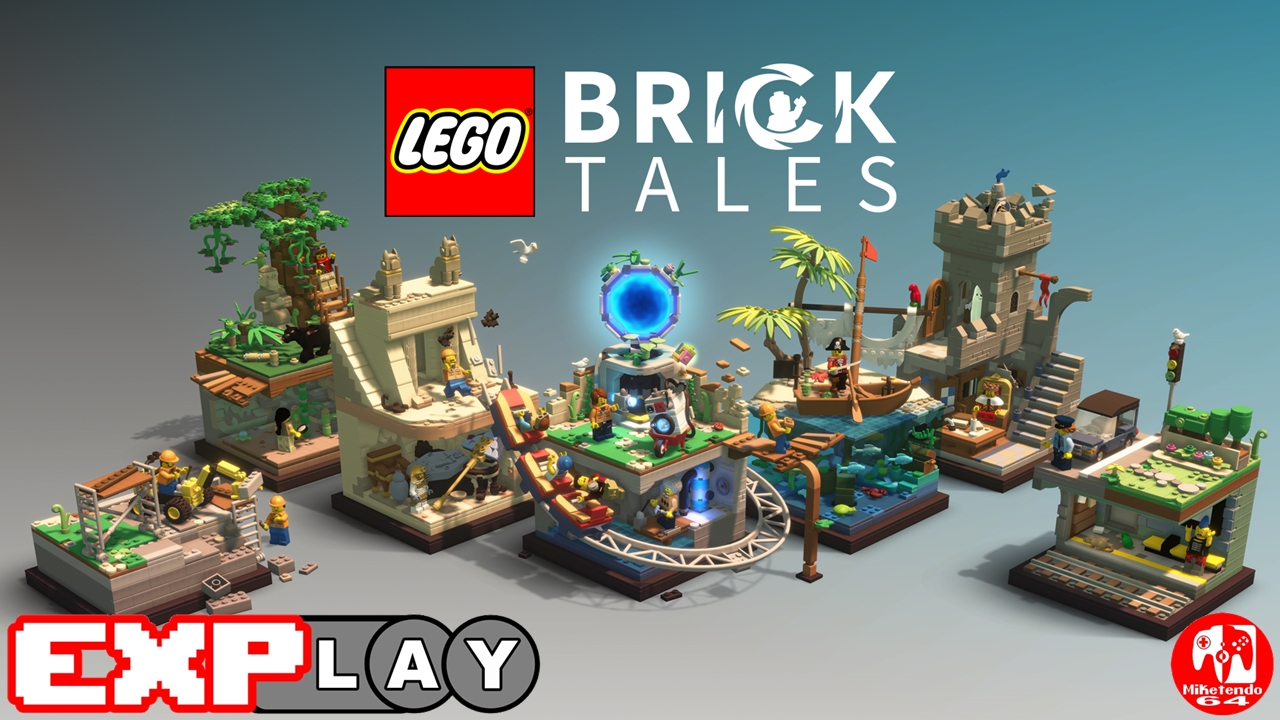 Welcome to EXPlay, (Explain & Play) the review series where we care not for scores but tell it how it is when it comes to every game we get our hands on, whilst also taking the time to include some lengthy gameplay, to give you the reader, the chance to shape your own impressions and views whilst watching and reading. In this installment, we’re covering LEGO Bricktales by developer Clockstone.

I want to start off by saying LEGO Bricktales is a great Lego game but very different than the more popularized games of recent years based on movie licenses. While many of the Star Wars, Marvel, Harry Potter, and DC games take to recreating those franchises in Lego bricks, Bricktales tells its own story and gives the gamer some creativity in how to solve puzzles. LEGO Bricktales is a linear game where getting from point A to point B may mean building a bridge, staircase, helicopter, or another object to complete puzzle objectives given to you by NPCs.

You begin the game by finding your grandpa stuck in his workshop after a contraption he has been working on malfunctions. Jumping into the gameplay you must repair the machines and connect with him. After completing some initial tasks of building and repairing his shop you take to the surface where you and your robot companion Rusty decide to jump a portal. You and Rusty set off to other worlds to find the rainbow bricks known as Happiness Crystals. Once you collect enough Happiness Crystals you can restore the theme park and essentially help your grandpa pay the rent.

From the get go with LEGO Bricktales, I was dropped into a jungle setting where a plane had crashed. I worked my way through the jungle at met a pilot and their passengers and ultimately helped to bring the team back together to safety. In the jungle, I built bridges, a staircase, a helicopter, and many other Lego sets. Along the way, I could also gather birds, ladybugs, and chameleons that dotted the ground which I would later discover are collectibles that some NPCs are looking for.

One thing you will do a lot of in LEGO Bricktales is building things. From time to time, you will come across tasks that need to be completed to solve puzzles and help citizens of the area you are in. Within each of these buildable moments, you will have a set number of pieces at your disposal as well as requirements. These requirements might be that the build needs to be stable to support your weight, fly for a certain amount of time, move without breaking, and more.

With the set number of pieces, you may find that your creativity within each build is slightly limited since you will need to make sure the requirements are met and not necessarily focus on the aesthetics of the build. This isn’t necessarily a jab at the game mechanics but it does limit in some ways the creative aspect of Lego when working to complete the puzzles.

I had played the demo of LEGO Bricktales on PC and felt that the controls were more intuitive there because of using a mouse. You will probably find the camera controls in lining up pieces and making your builds work a bit tedious at times when the main antagonist is simply getting pieces to land where you need them to go. While this wasn’t too frustrating it’s something to keep in mind if you will be getting this game for a younger builder that may get upset when things don’t work out as they hoped.

Visually the LEGO Bricktales game looks like one of the best Lego games I have ever played. The detail in the pieces and environments feels like a Lego movie that you get to control and walk around in. There are small details in the environments and the way things look that inspire me and my daughters who have also played the game to make unique creations out of our own Lego sets.

LEGO Bricktales contains the same level of witty banter as past Lego games though this one is entirely written dialogue and doesn’t have the voice acting like the past several Lego games have had borrowing from movie clips. This isn’t necessarily a bad thing, and since the game is more puzzle and exploration oriented the style of game narrative found in Lego Brick Tales fits its slower methodical pace.

Within each area of LEGO Bricktales, you will find a specific currency, like bananas, lollipops, or chicken drumsticks, for instance, that can be used to buy colorful brick upgrades, costumes, and more. As you progress through the game you also learn new abilities like a ground pound and special vision that unlocks hidden objects. These abilities can be used on past areas as well to unlock new paths for you to navigate.

As an avid Lego creator for practically 35+ years, Lego Brick Tales checks all of the boxes I want in a Lego game. The only issue I have with the game is that building can be a bit tedious at times as you fight with the camera and lack of piece variety to fulfill the requirements of the puzzle build, but ultimately those issues are tiny.  LEGO Bricktales truly is a stud of a game and should be played by Lego and puzzle enthusiast.