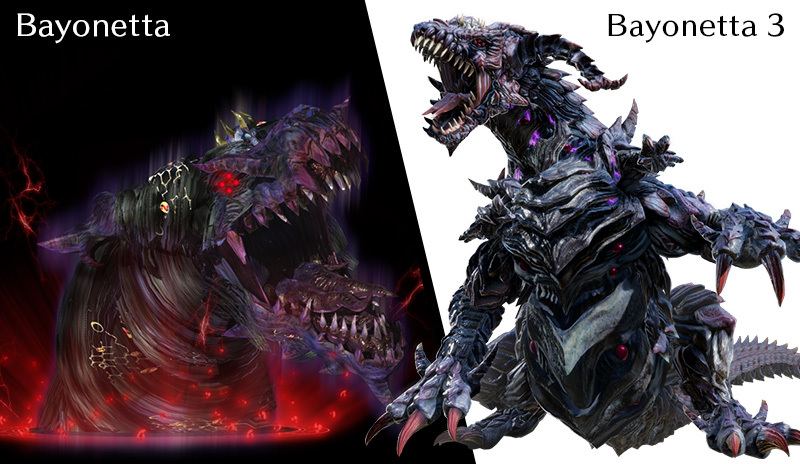 Launch day has finally arrived for the highly anticipated Bayonetta 3 and it’s time to enjoy the game to its fullest. Still, given the number of entries of Umbran Studies as posted by PlatinumGames, there are still plenty of interesting tidbits to discover. As such, here are a few of the game’s developers discussing the design process of the Infernal Demons:

Tsuyoshi Takahashi on the Two Types of Infernal Demons:

As Bayonetta 3 is the third iteration in the Bayonetta series, we have broadly positioned our demons into two categories.

As for the demons that you saw in the previous two iterations, we worked meticulously on making sure to maintain their unique designs and newly adapt them into the world of Bayonetta 3.

On the other hand, we designed the new demons in the way to ensure that they fit perfectly into the Bayonetta lore. For either one of these two categories, I think it goes without saying that understanding the Bayonetta world and maintaining a consensus with the game director are definite requirements and utmost crucial when designing these creations.

Madama Butterfly made a full-body appearance in Bayonetta 2, but I ended up designing a whole new outfit for her this time round as she was going to be appearing in higher detail.

Her outfit comes from me wanting her to have a goth metal look to her. As for her legs…Madama Butterfly is meant to be a martial artist. So I want you to pay special attention to her wonderfully muscular thighs—brought to life by character modeler Daniel Santos. I’m also very impressed with how Santos recreated her makeup!

Got it! This time, our Phan (let’s call him that because he is soooo cute) has had a bit of a makeover on when it comes to the color of his body surface. The surface of his body is white at birth and becomes tougher as he grows. However, after a certain point the surface will become weaker and darker in color as he ages.

Phan shoots swirling magma from the inside of his body just like he has done up to now. He has become even more skillful with magma this time around! Phan has reached his prime in Bayonetta 3 and has finally decided to show his true colors. I hope that you’ll get along with our little pet, as he is back to show us a new side of himself in Bayonetta 3.

For Malphas, we have created new areas that were hidden from the previous designs. We’ve added elements from the old designs, so this could be a timeless collaboration of sorts! We designed Malphas to blend well with its new components without changing any of its already established parts.

We made a new style for Baal that exposes some of the parts that were hidden in the second game.  Hear this. Some species of frogs raise their young on their backs, I believe, and this is an Infernal Demon with those characteristics.

Baal is also known to be one of the leading singers in the demon world, both fascinating those who listen to its ballads and causing terrible disasters through its vocal talent. Some tadpoles on Baal’s back eventually turn into baby frogs, while others are used as bombs and die out sacrificed as weaponry.

Oh my, the demon world is cruel indeed…

This demon is back from the second game. It’s a sibling Infernal Demon, and its shape changes depending on its fused state. It can change its appearance by fusing vertically or horizontally. It only fused vertically in the previous game. We have newly designed its separate states (younger and older brother in a separated form) and also its horizontally fused state.

The type of its shots also change depending on its fused state and I am sure that the other shooting game will find this rather pleasantly surprising!

This is a brand-new Infernal Demon. The concept behind its design is that an armed locomotive developed for the defense of a nation has been possessed by a demon. The original form of the demon, which is also a kind of vengeful spirit, resembles a hermit crab in a sense, and this time it has parasitized a locomotive…but will it ever parasitize anything else again? Personally, I would love to see it parasitize a battleship…how cool would that be! By the way, this Infernal Demon is heaps of fun to control!

Cheshire is a cat-shaped Infernal Demon contracted to Viola who is new to the world of Bayonetta. We designed Cheshire to be somewhat gross when looked at closely, but cute (and charming) when looked at in the right way. One of its eyes is artificial and there is a long story that led to this scar/injury, which may be told at some point.

In keeping with Viola’s taste, we have incorporated some Japanese motifs here and there into Cheshire’s design. In a way, the contracted witch and the demon are mutually influenced by one another.

Based on the information and designs above, which Infernal Demon is your favourite? Let us know!