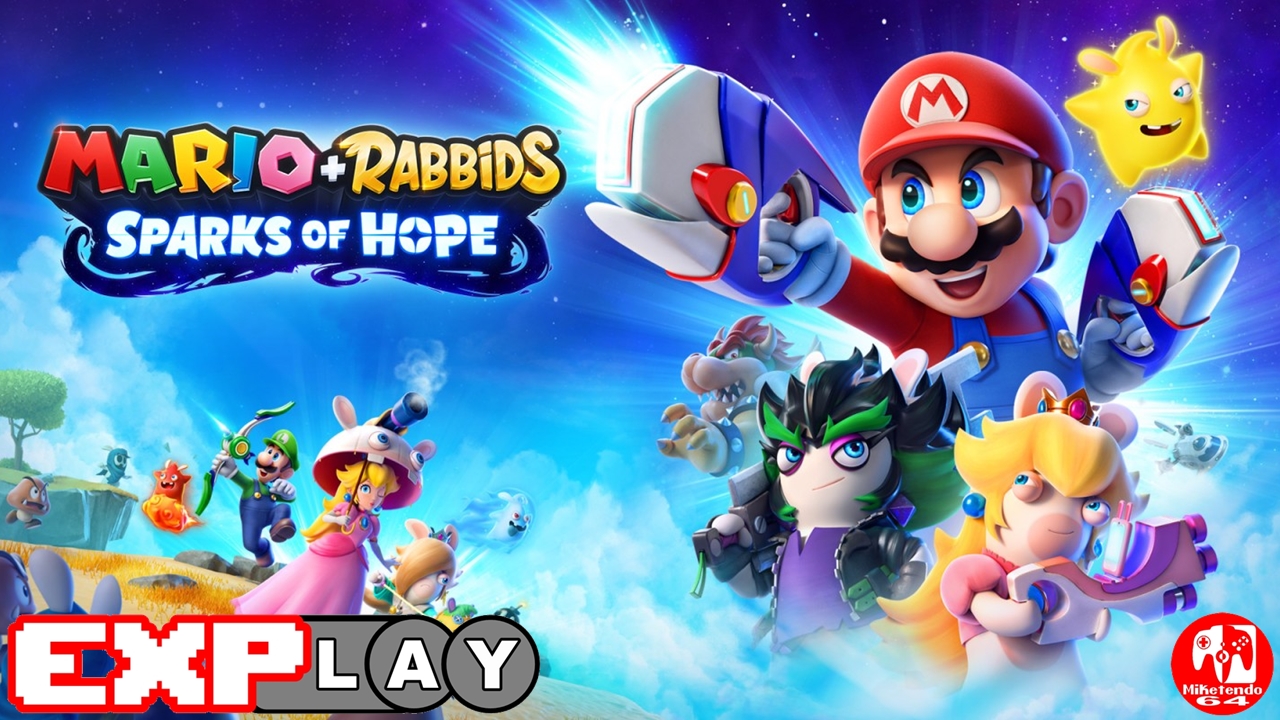 Welcome to EXPlay, (Explain & Play) the review series where we care not for scores but tell it how it is when it comes to every game we get our hands on, whilst also taking the time to include some lengthy gameplay, to give you the reader, the chance to shape your own impressions and views whilst watching and reading. In this installment, we’re covering Mario + Rabbids Sparks Of Hope EXPlay by developer Ubisoft Milan.

I must admit that it doesn’t feel that long ago when rumor spread across the internet about a video game about Nintendo’s Super Mario and Ubisoft’s Raving Rabbids. Those rumors turned out to be true and on August 28th, 2017 Mario + Rabbids Kingdom Battle released on the Nintendo Switch. The game saw much acclaim from critics and the public alike that helped the game expand upon itself with Donkey Kong DLC that was even further loved (cue the DK Rap!).

After five long years, we are now welcome with a much-anticipated sequel from the Bravissimo Davide Soliani and his highly talented team over at Ubisoft Milan.  The brilliant Grant Kirkhope (Banjo-Kazooie/Yooka-Laylee/Viva Piñata) returns to provide the soundtrack but this time he is not alone as equally brilliant, Yoko Shimomura (Final Fight/Street Fighter II), and Gareth Coker (Ori and the Blind Forest/Ori and the Will of the Wisps) also contribute to make what is possibly the best video game soundtrack of this generation.

Mario + Rabbids Sparks of Hope sees Mario and friends return to fight against an intergalactic threat that is covering the galaxy in a black gooey residue of Darkmess. Assisted by Beep-O and their AI assistant Jeane, Mario, Luigi, Princess Peach, Rabbid Mario, Rabbid Luigi, and Rabbid Peach must travel from planet to planet to confront the evil Cursa and put a stop to her wicked plans of kidnapping star-shaped critters called Sparks whilst spreading Darkmess wherever their reach extends to.

Just like the first game, Mario + Rabbids Sparks of Hope is a 3rd-person tactical shooter that is akin to the likes of the X-COM series. The player must engage in turn-based combat to carefully dispatch enemies on the battlefield, although that is not always the primary objective in some battles. Sometimes it can be a case of reaching the goal area, or surviving enemies for a certain number of rounds. Regardless of the main objective, you control a team of up to three characters who each have their own sets of strengths and skill. For example, Mario is a good all-rounder who can stomp on enemies after administering a Team Jump, Rabbid Peach is the Team Healer who can help replenish the health of her teammates, and Luigi is a sharpshooter who can deal damage to opponents from afar.

As you and the enemy take it in turns to inflict harm on one another, you must try and use all possible means to deal the pain on them before they can do so to you. During your turn, you can move each character freely within their movement range. This is a notable upgrade from the restrictive square/space movement of the previous game. You can use the team jump option on team members to leap up into the air and glide to a different area outside of your movement range that will then expand a little further upon landing, giving you plenty of opportunity to find better cover, initiate a full-on assault or make the last-ditch effort to make it to the goal area. Players can also dash into enemies to deal damage to them, though some characters can dash into more enemies than others can in a single turn (providing you upgrade that particular skill. More on that in a minute).

When you find yourself in a good enough position, you can use skills, sparks, items, and weapons. You can only use two of these options per turn and bear in mind that after using your weapon, you will not be able to move that character afterward. Skills depend on the character that you use. Luigi, for example, has his Steely Stare that will shoot at an enemy that moves out of cover and into his line of sight. Rabbid Peach can recover a percentage of her teammate’s health. These skills come with a cooldown so you will have to wait a few turns before they become usable again.

In the case of Sparks, these little critters can accompany your heroes into battle and give them additional effects to their dashes and weapons. Effects include shock, splash, ooze, frostbite, and gust which can hurt enemies even further should they be weak to a particular effect. You should also bear in mind that as for weaknesses, enemies also have resistance to certain effects as well. You can always rely on Beep-O to analyze enemies before engaging in battle to see what sparks would be most beneficial for the battle ahead.

After clearing a battle, all of your party members can earn experience, not just the three members on your team. This means that you won’t have to worry about grinding experience for the other heroes in your team if you only use a certain three heroes in your team. During some battles, you will be rewarded with skill prisms that you can use to unlock or improve your heroes’ abilities. This can include extending their health, adding an extra dash to their repertoire, increasing the strength of their weapons and skills, etc.

For those wondering about the scope of Mario + Rabbids Sparks of Hope, there are six planets to explore that each have two main quests each and well over a dozen side quests. The game can take about 20 hours to beat (give or take) but if you are looking for 100% completion then that time can almost double to 40 hours. However, if you are quite a dab hand at playing through games quickly, the overall time will undoubtedly be less for you.

The areas that you visit on each planet are not excessively large but do provide plenty of space for exploration. They also have their own particular themes with one planet being a beach theme and another being a frozen landscape, etc. To top it off they also have some fantastically composed background music to accompany them which we would not expect anything less from the likes of Grant, Yoko, and Gareth who are truly music maestros and well deserving of their fame and recognition in both the video game world and music world as composers.

Our honest thoughts of Mario + Rabbids Sparks of Hope is that it truly goes from strength to strength of improving the original formula and making an all the more enriching experience. The team over at Ubisoft Milan have done a phenomenal job in making this game fun, engaging, and extremely tough to put down. The gameplay, the story, the characters, the music, everything is so madcap and yet works beautifully and continues to complement each other every step of the way.

For Davide and his team at Ubisoft Milan, we would like to say:

Even if you haven’t played the already exceptional Mario + Rabbids Kingdom Battle, you owe it to yourself to play Mario + Rabbids Sparks of Hope. I mean, it’s essentially Mario Galaxy 3 with Rabbids!!! A truly epic experience of galactic proportions.