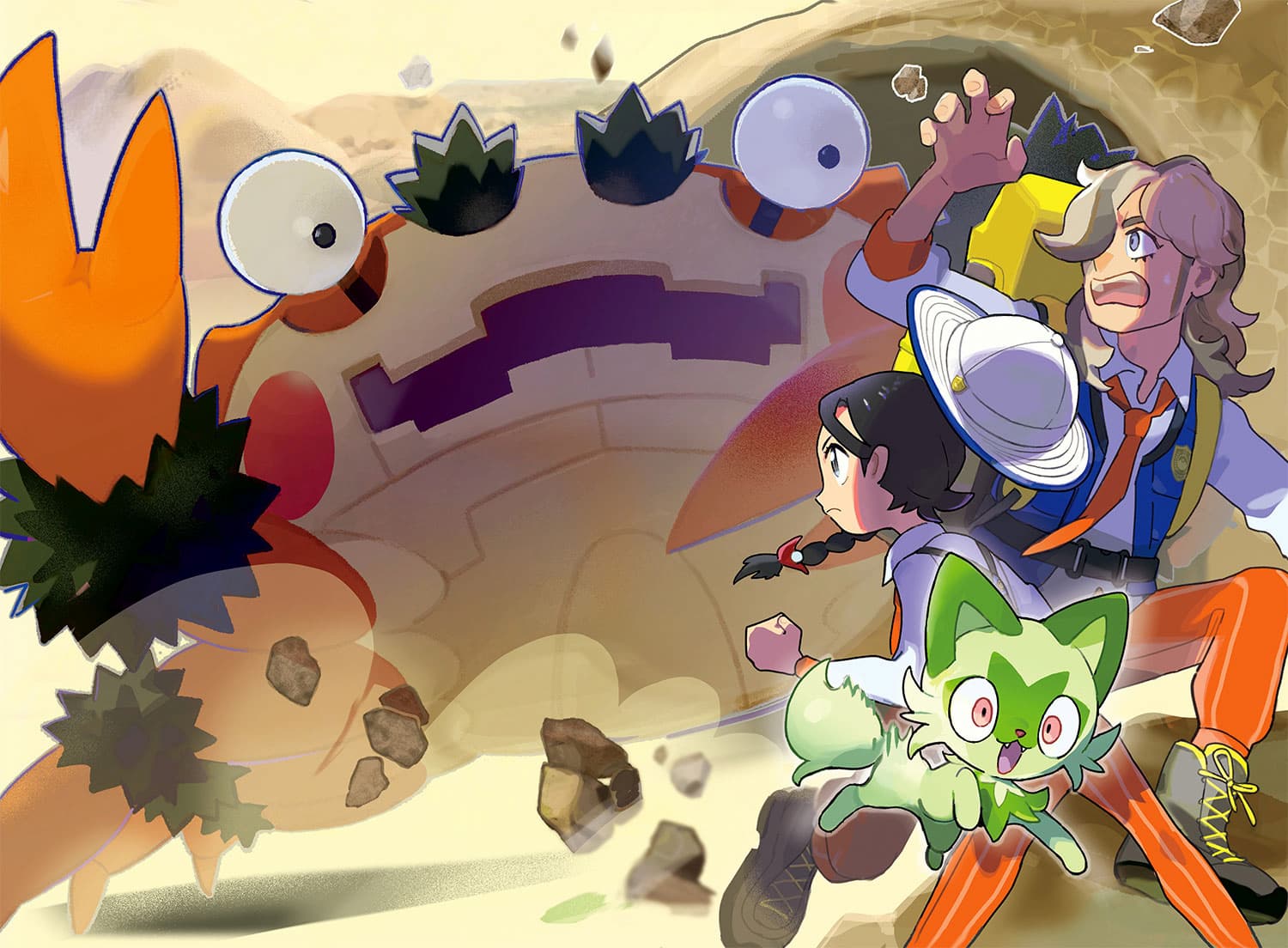 With the latest trailer for Pokémon Scarlet and Pokémon Violet, out now, plenty of new details were revealed. From new characters, new Pokémon to a whole host of story details, there was pelnty to digest. We certainly ate well with that new trailer and for a handy recap of what was covered and additional tidbits, we have all of that and more, right here:

Tell Your Pokémon to Go Adventure! – You can have one Pokémon out and walking with you in the Paldea region’s great outdoors. When you have a Pokémon exploring with you in the field, you can use the “Let’s Go!” feature to send that Pokémon off in the direction you indicate. The Pokémon you send out then independently picks up items in the area and even has Auto Battles with nearby Pokémon.

What Are Auto Battles? – Auto Battles are a new way of battling that can be activated by using the “Let’s Go!” feature. Doing so will send out a Pokémon to battle wild Pokémon without needing orders from its Trainer. Your Pokémon can be sent into an Auto Battle against any wild Pokémon you see on the field, and it can even find Pokémon to engage in Auto Battles on its own.​

Master using this new feature to explore every nook and cranny of the vast Paldea region with your Pokémon!

The school that you’ve enrolled in hosts a special independent study project. The theme of this assignment is “A Treasure Hunt.” Explore the world and seek out your very own treasure!

Three stories will be woven into your adventure while traversing the sprawling Paldea region. Along Victory Road, you will go to Gyms in different locations in order to achieve Champion Rank. On the Path of Legends, you can join Arven in search of rare ingredients. And in ★ Starfall Street ★, you’ll challenge Team Star, a group of delinquents causing trouble for the school.

These stories are set in an open world, so where you go is all up to you. A world teeming with Pokémon and people to meet is waiting for you—traverse the Paldea region wherever you heart desires.

Victory Road—Your Path to Champion Rank – There are eight Pokémon Gyms in different locations throughout Paldea, all managed by the Pokémon League. If a Trainer makes their way to the Gyms, defeats all of the Gym Leaders, and then passes the Champion Assessment at the Pokémon League headquarters, they can earn the coveted Champion Rank.

After accepting Nemona’s suggestion to become a Champion-ranked Trainer, you too will be able to visit the eight Pokémon Gyms scattered across the region.

The First Trial of the Gyms: The Gym Test – At a Pokémon Gym, you must first pass a Gym Test before you’ll be allowed to challenge the Gym Leader.

The contents of these Gym Tests are unique to each Gym, but through them, you might come to learn more about the customs and unique features of each city and town, as well as what kind of people the Gym Leaders are.​

Though mild-mannered, Geeta still has a commanding presence, and it’s said that anyone who calls themselves a Pokémon Trainer looks up to her. It appears that she is looking for exceptional young talents capable of conquering the Pokémon League.

Brassius, Gym Leader of the Artazon Gym – Brassius is the Gym Leader of Artazon, a town that’s alive with flowers and art. He specializes in using Grass-type Pokémon and is known as the Verdant Virtuoso. Gym Leader Brassius treats Pokémon battles as works of art and is always in search of artistic quality, using his Gym Test to help judge a Trainer’s aesthetic sensibilities.

His pièce de résistance, “Surrendering Sunflora,” is a statue installation depicting adorable Sunflora with somber expressions. Just what these Sunflora are surrendering to is a topic of debate among connoisseurs.

Search for Herba Mystica on the Path of Legends – Arven’s research into healthy recipes for Pokémon has led him to seek out rare ingredients called Herba Mystica, which are said to immediately restore health once eaten. Herba Mystica are extremely rare herbs that can only be found in Paldea. They are guarded by Titan Pokémon, which are bigger and stronger than ordinary Pokémon—making these rare herbs even more difficult to obtain. What’s more, a number of these Titan Pokémon have already been sighted in the region.

Since Arven isn’t good at Pokémon battles, he’ll be asking you to help him out—and will even offer to treat you to some of his hand-made dishes if the two of you succeed in obtaining these rare herbs. Drive back tough opponents and gather the Herba Mystica together with Arven!

Face Off Against the School’s Troublemakers in ★ Starfall Street ★ – Team Star was formed by the school’s most rebellious students and is made up of several squads. Each squad is led by its own boss, each with their own base scattered across the Paldea region. These class-cutting delinquents cause trouble for all those around them, giving the academy’s students and teachers a hard time by disturbing the peace and using pushy recruitment tactics.

March up to their bases and face off against the troublemaking Team Star!

Make Your Way into Team Star’s Bases to Take Down Their Bosses! – When you go to take on each squad’s base, Team Star’s many grunts will send out a relentless barrage of Pokémon to get in your way. By defeating enough of the grunts’ Pokémon within a given time limit, you’ll be able to challenge their boss to a battle.

Engage in Auto Battles—a convenient feature that’s new to these titles—to overcome the unending barrage of Team Star’s grunts and their Pokémon!

*NOTE: The uniforms worn by the members of Team Star will differ depending on the version of the game you play.

Take on the Bosses Riding Their Starmobiles – Once you overcome the waves of Team Star Grunts, their boss will appear in a custom car called the Starmobile. It seems that during your Pokémon battles with these bosses, the Starmobile itself will get in your way. Take down each squad’s boss by defeating their party Pokémon and their Starmobiles!

Mela, Boss of the Schedar Squad (AKA Team Star’s Fire crew) – Mela is the boss of Team Star’s Fire crew, the Schedar Squad. As the team’s best all-rounder, Mela fixes any and every problem thrown her way, though her methods are heavy-handed. She leaves a forceful and gruff impression, but her steadfast devotion to completing anything she puts her mind to has earned her the trust of her teammates.

NOTE: The uniforms worn by the members of Team Star will differ depending on the version of the game you play.