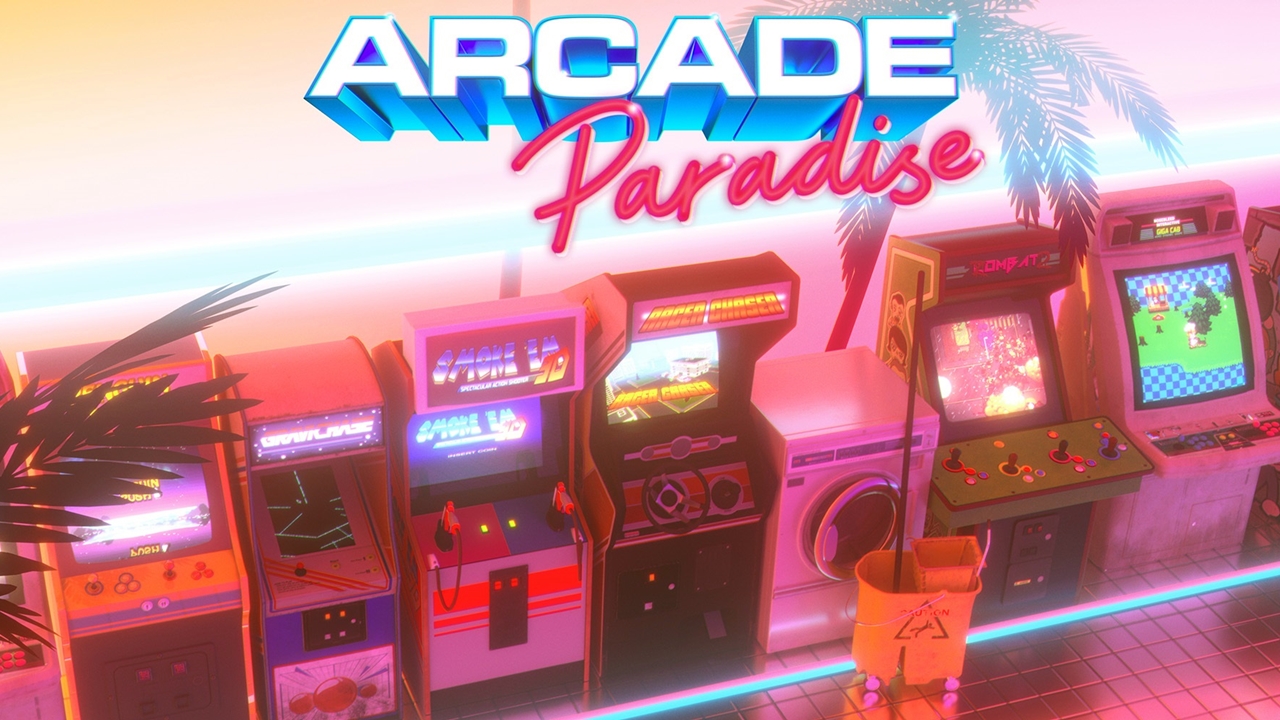 The Laundrette/Arcade management simulator Arcade Paradise from Nosebleed Interactive and Wired Productions had received its first update. The version 1.3 update fixes a good number of bugs that players have been experiencing as well as add some QoL improvements and adjustments to certain arcade machines.

You can find the full list of console patch notes below. They are applicable for all console versions of the game, not just for Nintendo Switch.

– ‘Objectives Done’ UI could show incorrect values when first shown. Fixed.
– Various PDA UI fixes
– Monospaced the Leaderboard scores for easier reading
– Fixed some issues with too many decimal point numbers appearing on PDA
– Credits now render correctly in 4K
– Credits updated to include some absolute legends
– Improved a number of text and UI issues on the PDA menu where fonts would render at the wrong size or elements would appear too dark on the “Goals” menu
– Changed font on bank balances to make them more legible at lower resolutions
– Resized Jukebox album covers so they all appear correctly scaled
– Changed text kerning on email browser so that emails can be larger without being cut off

– Zombat 2 Sniper rifle goal tracks correctly
– Zombat 2: To do – “shoot 300 bullets in one life in Zombat 2” now resets at start of day
– Racer Chaser: Complete 3 Levels task in Racer Chaser now works
– Vostok 2093: To do – Destroy 100 enemies in vostok 2093 now tracks correctly
– UFO Assault – “Destroy 500 building floors” goal now functions as intended
– Championship Darts – “Win with a 6 dart finish” goal now functions as intended
– Strike Gold: “Destroy 1000 tiles in Strike Gold” to-do now functions as intended
– Cyberdance goal – complete a song on cyberdance without missing a beat made easier and now triggers correctly
– Bomb dudes – have all powerups active at once goal now triggers correctly
– Line Terror: “get a score of 1250 on line terror” fixed
– Line Terror “complete 3 stages in line terror” todo made easier
– Meteor Madness – “collect 10 diamonds” was looking for 20. Fixed
– K&K “Eat 15 apples in snake” goal now tracks
– K&K – To do – KO 50 enemies in Knuckles and Knees now works
– Toad and Turtle: Complete a level in toad and turtle without moving left or right now works, and made easier
– Bugai – Throw 13 Bubbles to your opponent now working correctly
– Thump-A-Gopher: “Hit woodguy 10 times” wasn’t completable due to resetting on each playthrough. Fixed.
– Blobs From Space – defeat motherships now tracks
– Jukebox Goals and playtime did not have an effect on income. Fixed
– Jukebox Goals tracked but did not save progress. Fixed
– To Do 15 laundry loads was reduced to 7 to be more achievable
– Achievements should now all trigger correctly
– Multiple other Goal and To-Do tracking fixes

– Arcade machines now receive the correct amount of money at the end of the day
– Racer Chaser – Leaderboard score now accumulates correctly
– Woodgal Adventure: Coin hopper is now easier to select
– Woodgal’s Adventure inventory items now save correctly. (But note that you have to use the Save Points for this to work. Will be fixed in later patch)
– Table Football – Fixed Camera getting stuck in replay mode after replay is skipped
– Table Football – Footballers rotate while on pause
– Bugai: The first time you try to play on each new boot it wouldn’t accept input. Fixed
– Woodguy golf – golf arc was not showing up on some platforms. Fixed
– Bomb Dudes – Enemy corpses no longer kill the player
– Thump-a-gopher: Gophers were not always appearing. Fixed
– Space Race – Fixed issues with craft not being able to move, and UI showing negative numbers.
– Communists from Mars explosions have been tweaked to make getting chains easier
– Darts – Alex’s character had some graphical issues. Fixed.
– Blockchain – Issues with placing blocks on the top most row have been resolved.
– Blockchain – Player could get blocked after filling board and placing last block with one move left. Fixed
– Air hockey – if “Allow Multiplayer” is disabled in the Front End then it would not work properly on first play. Fixed.
– Stack Overflow – >100 minute games would display the wrong time. Fixed.
– Multiple crash fixes across all games
– Improved glow particles on Woodgal Adventure and Thump-a-gopher
– Blockchain cabinet instructions have been re-written
– Zombat 2 – Multiplayer Fixs
– Knuckles & Knees – rebalanced to be slightly easier
– Space Race – UI rendering fixes
– Thump-a-Gopher – Fix for crash when the game is not actively running and gophers are collided with
– Table Football – Fix for crash when leaving and re-entering without starting a game

– The notification for holding over $5000 was very distracting when collecting more money. Disabled.
– Multiple instances of hard-to-collect trash fixed
– Including the Crushed Cans on the window-sill (you know the one!)
– Multiple instances of hard-to-collect, misplaced, or floating gum fixed
– Rival emails – Attack Vector – Was only showing 4 emails instead of 5
– Rival emails: ‘Unread’ state wasn’t saved. Fixed
– Rival email reward pictures could only be opened once. Fixed
– Laundry baskets now randomise in colour when spawned
– Player could pick up two washing baskets causing first one to disappear. Fixed
– Player was able to disable some of the upgrades that should be permanent. Fixed.
– Rare issue where you could not collect laundry after the tutorial. Fixed.
– Idiot’s guide to PC items could disappear from desktop after purchase. Fixed.
– In the first shrinking of the laundrette there was a metal basket holder which made the washing machine inaccessible. This has been removed.
– It was possible to freeze time by existing the Safe. Fixed.
– Crash when looking at Music player with all extensions unlocked fixed
– Pixelated NPC eyelashes were not disappearing in some situations. Fixed
– Some missing collision in several of the levels was fixed
– Fixed some issues with the Map, Tutorials and VO
– Multiple crash and progression blocking fixes
– Increased interaction distance to improve item picking
– Characters now begin to glow as they appear/disappear
– Reduced bloom and exposure on some platforms to improve performance and increase legibility
– Grunge male character was using wrong eyelash material.
– Many of the player upgrade prices have been reduced to make obtaining them easier
– Improved Skyboxes to increase performance
– Fixed the car being usable in the Empty scene before the arcade has been bought back
– XBOX – Fix for controller assignment issues with multiplayer game
– XBOX – Fix for crash when disconnecting controller on PC webpages
– XBOX – Changed video encodes to H264 to fix corruption on XB1X