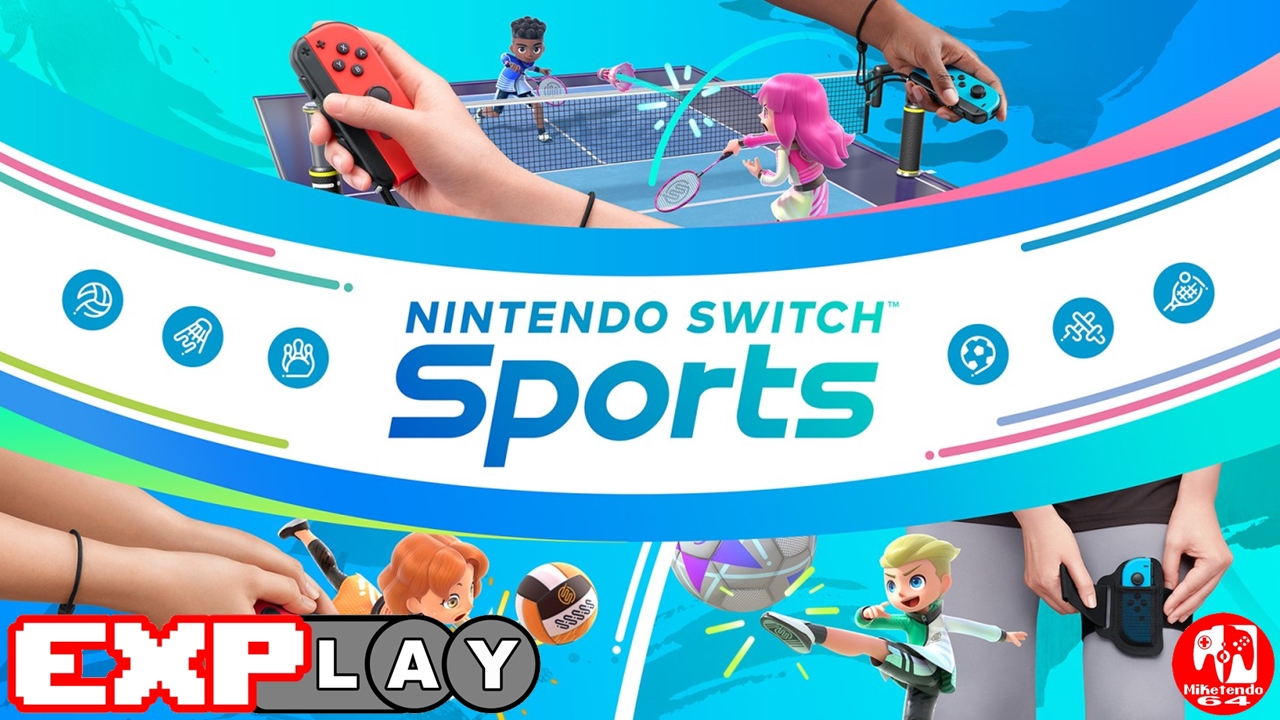 Welcome to EXPlay, (Explain & Play) the review series where we care not for scores but tell it how it is when it comes to every game we get our hands on, whilst also taking the time to include some lengthy gameplay, to give you the reader, the chance to shape your own impressions and views whilst watching and reading. In this installment, we’re covering Nintendo Switch Sports by Nintendo.

In 2006, Wii Sports was released upon the world as a launch title for the Nintendo Wii and usually came bundled with the console. The game offered five different sports; Golf, Tennis, Baseball, Boxing, and Bowling and motion controls were used to play them. It was perhaps the most innovative and immersive game at the time when physical movements were used in order to interact with objects on screen.

Wii Sports was a resounding success that has sold over 82,9 million units though most of them are probably due to being sold alongside the Wii Console. A sequel followed in the form of Wii Sports Resort which offered even more sports and activities for players to get involved in and play. Although it was a vast improvement over its predecessor, it couldn’t beat it in terms of sales. However, it did manage to sell a respectable 33,14 million copies.

Roll on to 2022, over 16 years since the debut of the Wii Sports series, Nintendo Switch Sports has graced the world. A global beta test was released in early 2022 that allowed participants to play three of the six available sports in the game at random with other players online. The global beta test only ran for a weekend and for some strange reason, no one was allowed to talk about it. Not Jimmy Blogs, nor Joe Public, or even Thomas Press. With the full game finally released though, it is open season so let’s talk all about Nintendo Switch Sports.

Nintendo Switch Sports allows players to take part in six different sports in the comfort of their own home with the beauty of motion controls. It can be played locally with up to four people or online with up to two on a single console. Depending on which sport you play, up to 16 players can play together at the same time. The six sports available to play are Volleyball, Badminton, Tennis, Chambara, Football, and Bowling. Each sport uses the Joy-Con motion controls to interact with what is displayed on the screen.

Most sports are pretty self-explanatory but we will just highlight what players can do in each one. In Volleyball, there are four players in teams of two. Depending on your position on the court, you must serve, bump and spike the ball in order to score points. In Badminton, it is a 1 Vs. 1 affair where you must volley the shuttlecock to and fro and try and get it to land on the opposing side. Tennis is a 4-player game where you two players face off against the other two. If there are only two players, each player is on opposing sides of the court and can control both the outer player and the inner player on their side of the court.

Chambara is a 1-on-1 sword-fighting game where you must hit the other player until they fall off the platform and into the water below. Some players may remember this sport from Wii Sports Resort but under a different name. Football can be played 1-on-1 or 4-on-4 and has players chase down and kick an overly large ball into the goal of the opposing team. The last sport (Bowling) will have you and your friends compete against each other to get the best score. When playing online however, you will face off against 15 other players in Survival Bowling. Players must do their best to score high or risk being eliminated at the end of the round. There are multiple rounds and whoever has the most points wins.

When playing any of these sports, you will use avatars called sportsmates. They have replaced the Miis of previous Wii Sports games but that doesn’t mean that Miis can’t be used either. If you have your own Mii saved to your Nintendo Switch system, you can import it into the game and use it as your avatar. You can’t create Miis in Nintendo Switch Sports; you can only create them on your Nintendo Switch console. If you do use Miis, you will also find that the customization options for them are somewhat limited as well. Sportsmates being the default avatar for this game, have access to all of the game’s customization options (when available). This includes things like headwear, glasses, and face markings for example. As for Miis, they will only be able to change their clothing and sports equipment (chambara sword, volleyball, tennis racket, etc.). Anyone who has played GO VACATION will probably experience Déjà Vu vibes with this game with how Mii customization is handled.

Customization items are somewhat limited at the beginning of Nintendo Switch Sports but you can earn more by playing online. As you play sports online, you will earn points. When you have earned 100 points, you will receive a customization item or a title at random. These items are available for a limited time and will be changed with a new wave of items. As the items are part of a selection and you can see what each of the items are, if there is one you are particularly interested in, just keep playing online and you will eventually get the one you want. You may likely get it as the very last item but at least you will finally get it.

Once you have played a sport a number of times and won a fair share of them, you will be able to take part in the Pro League. The Pro League will start you off at the rank of E and you must play and win in order to get promoted and rise up the ranks. Win games and you gradually move up. Lose games and you will risk being demoted. Pro League matches will have you play against similarly ranked players with the occasional player(s) either behind a rank above or below. It is a long road to the top but if you have the conviction and the skill to back it up, you might make a pro out of yourself yet.

I have personally enjoyed my time with Nintendo Switch Sports and while I might not be looking to go pro anytime soon, I am glad to hold my own and not lose too much against better players than myself. Though I may look pretty good in the gameplay videos below. I was playing on the Normal difficulty or players of a similar skillset to my own. If I were to play against some of the expert players though, I would probably stop playing and go cry in the shower for a while.

If you are hoping for a perfect successor to Wii Sports Resort, you will be disappointed. Nintendo Switch Sports is still a pretty fun game though and I would surely recommend it if you like your video games to be more proactive. Yeah, it may only have six sports to start with but another one is on its way in the form of Golf and who’s to say that Nintendo will stop at that. Perhaps Boxing and Baseball will also make a return? Who knows?