[Guide] All Kirby and the Forgotten Land Blueprint Locations 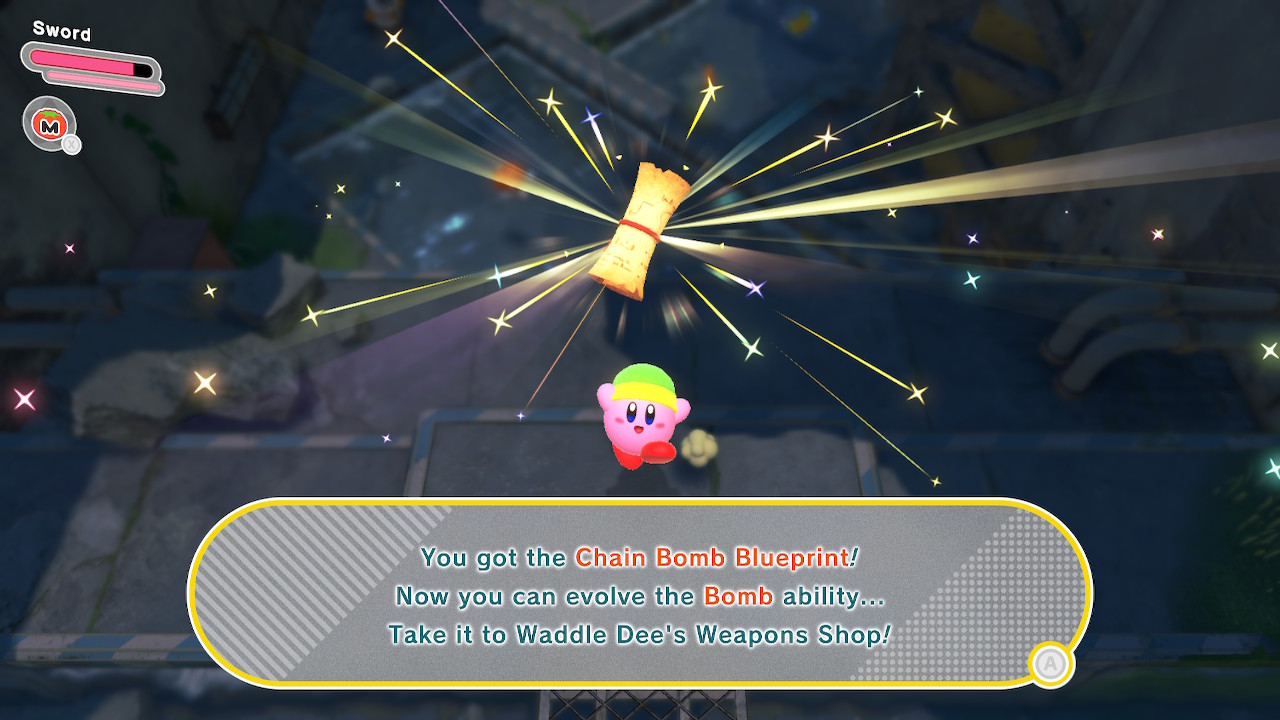 Hidden throughout Kirby and the Forgotten Land are blueprints that will make Kirby’s copy abilities even stronger. In this Blueprint Locations guide, we will help you find all 24 Blueprints (including the two you get from the Weapon’s Shop Waddle Dee) and what copy ability they will upgrade.

These are the first two blueprints that you will get your hands on and are the easiest to get too. You will get these from the Weapons Shop Waddle-Dee upon speaking to him once the shop is built and open.

In the first area of the Scale the Cement Summit stage in Everbay coast, climb up a couple of ladders and you will find a platform with blocks in the floor. Hit the bomb block on the lockers and the blocks will disappear, revealing the blueprint.

In the second area of the Fast-Flowing Waterworks stage in Everbay coast, when in the area with a platform over a pool of water, defeat all the enemies and a chest will appear revealing the blueprint.

Defeat Tropical Woods in The Tropical Terror stage in Everbay Coast and the blueprint will appear.

In the area of the Welcome to Wondaria stage in Wondaria Remains where you get the Water-Balloon Mouth Kirby ability. Water the second lot of planters and clear the muck off the righthand platform. The platform will fall revealing another planter. Watering all four planters will reveal the blueprint.

In the Circuit Speedway stage in Wondaria Remains, you will find a chest containing the blueprint after defeating Wild Edge.

In the Invasion of the House of Horros stage in Wondaria. In the third area just before you reach the third fake wall. To the left side of the steps is a small tunnel with a green star coin inside. Go inside and follow the tunnel all the way to the end to find this blueprint.

In the Wondaria Dream Parade stage in Wondaria Remains where you must use Kirby’s Water Balloon Mouthful Mode ability to spray the parade vehicles into the metal boxes. Towards the end of this area you will see a broken shutter, spray several parade cars into it to break it and then spray more cars into the cracked wall behind. You will find the blueprint as well as two piles of Star Coins.

Defeat Clawroline in the Danger under the Big Top stage in Wondaria Remains. The blueprint will appear immediately after.

Once the Colosseum has opened in Waddle Dee Town, take on the first tournament and defeat Meta Knight. You will be awarded the Meta Knight Sword Blueprint by the commentator.

In the Windy, Freezing Seas stage (Winter Horns). In the area with the cannons (after the boat section), Use the fire ability on the Scissor-Lift to unthaw it from the ice. Use Mouthful mode to move the Scissor-lift to the opposite side and raise the lift to reach the platform above. On the platform you will find a chest containing the blueprint.

In The Battle of Blizzard Bridge stage (Winter Horns), defeat the Frosty miniboss near the end of the stage to gain access to a chest containing the blueprint.

Defeat King Dedede in the An Unexpected Beast King stage in Winter Horns. The blueprint will appear immediately after.

In The Wastes Where Life Began stage (Originull Wasteland). In the first area, head off to the far-right hand side and climb the ladder on the side of a stranded ship. At the top you will enter a boss fight with Fleurina. Defeat her and walk towards the bow of the ship to find a chest containing the blueprint.

In the Searching the Oasis stage (Originull Wasteland). In the second area, just past the ring of muck, there is a raised rooftop to the right. On top of this roof is a broken fence that leads to another roof that has a chest containing the blueprint.

In the Alivel Mall (Staff Side) stage (Originull Wasteland). In the seret area where you fight a Wild Bonkers miniboss, defeat him and inhale the hammer copy ability. Hit the two switches in the room and the locked gate will open, providing access to this blueprint.

In the Moonlight Canyon stage (Originull Wasteland). In the first area, just before you go through the door, there is a barrel inside an alcove on the lower lefthand side. Destroy the barrel to find the blueprint.

Defeat Sillydillo in the Collector in the Sleeples Valley stage in Originull Wasteland. The blueprint will appear immediately after.

In the Conquer the Inferno Road stage (Redgar Forbidden Lands). In the area where you find the gold cage holding the Waddle Dees, there is a target just off the right-hand side. Shoot it with the Ranger ability and the blueprint will appear.

In the Burning, Churning Power Plant stage (Redgar Forbidden Lands). In the area with the vertical presses, just before you go through the door, head in the opposite direction to find a lamp. Use the fire ability on it to open up the far-right press. Go under it and then climb to the top. Float across from the press to the other which has a small tunnel. Inside the tunnel is the blueprint.

In the Gathering of the Beast Council stage (Redgar Forbidden Lands). After defeating Clawroline head towards the Rocket but don’t climb up the stairs just yet. Walk to the righthand side and the camera angle will change revealing the blueprint hiding in an alcove.

Upon beating the main story, return to Waddle Dee Town and talk to the Waddle Dee in front of King Dedede. He will thank you for your help and will give you the Masked Hammer Blueprint.

Defeat Morpho Knight on the Isolated Isles: Forgo Land stage (Isolated Isles). This blueprint will be dropped immediately after.

We hope you found this guide helpful in finding all of the Blueprints in Kirby and the Forgotten Land. We do have more guides on the way including a guide for the Gotcha Machines and where to find the secret HAL rooms. Until next time, Keep On Gaming!