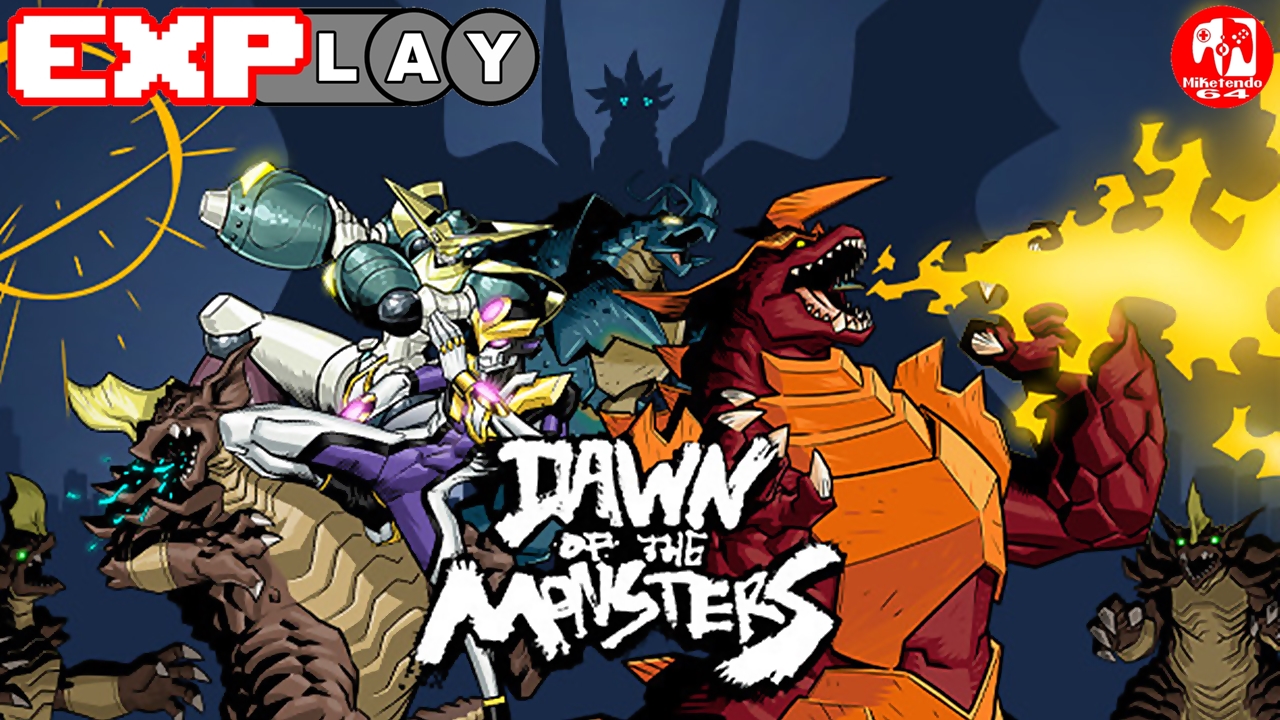 Welcome to EXPlay, (Explain & Play) the review series where we care not for scores but tell it how it is when it comes to every game we get our hands on, whilst also taking the time to include some lengthy gameplay, to give you the reader, the chance to shape your own impressions and views whilst watching and reading. In this installment, we’re covering Dawn Of The Monsters by developer 13AM Games.

Dawn Of The Monsters: (The Explanation)

It seems like it has been forever since our favourite Toronto-based game development studio, 13AM Games, last released a game. We’ve been fans of theirs since Runbow and Pirate Pop Plus but their last game was Double Cross back in 2019. It was good to know that they were hard at work behind the scenes and have now released Dawn Of The Monsters which is published by another favourite studio of ours, WayForward.

Dawn Of The Monsters is a side-scrolling Kaiju beat-em-up that can be played with 1-2 players with each player taking control of one of four behemoths; Megadon, Aegis Prime, Tempest Galahad, and Ganira. The appearance of each character is inspired by those from familiar movies and TV series like Godzilla, Gundam, and I want to say Ant-Man as well (though in this case Gi-Ant Man). The four protagonists are part of a worldwide defense program known as DAWN (Defense Alliance Worldwide Network). When giant monsters were unleashed upon the planet, it is up to DAWN and its team of heroes to stop the monsters and restore peace to the world.

Much like any other arcade brawler or beat-em-up. You are tasked with going through each stage and beating down on any and all enemies in your path. As the hulking behemoths that the characters and enemies are, the stages you fight on are those of large cities that look tiny in comparison. Enemies can come at you a few at a time or several enemies will descend upon you at once. You can fight them back by administering weak or strong attacks and rack up combos with their deaths. The entire stage is filled with destructible buildings and structures and some you can even pick up to beat up enemies or throw them at them.

Each stage is broken up into smaller sections and in order to move on from one section to the next, you have to defeat every enemy present. As you do, you will be graded on your performance of how well efficiently you deal with them. This is not connected to how much health you have left but rather how proficiently you kill the enemies and maintain a combo.

On the subject of health, you can find the occasional pick up somewhere in the stage but you can also replenish health by defeating monsters in a certain way. When monsters are low on health themselves, you can perform an execution attack that will replenish some health at the cost lowering your rage meter. The rage meter fills up as you dish the hurt on enemies and will allow you to perform special attacks that can deal even more damage. When the meter is full, you will also be able to do a devasting attack that will really do some damage.

While on most stages, you will simply have to clear out several waves of enemies, you will also come across even bigger enemies or “boss enemies”. Bosses have much more health than the standard minions and their attacks can do a lot more damage. Oftentimes though, you can usually get a few hits in and then back off before the boss brings a heavy attack down on you. If you keep enough space between you and the boss though and attack when there is an opening, you will drop them soon enough and beat the stage.

When between missions, you can upgrade your characters with DNA Augments. These can boost your character’s states and give them perks that can be helpful in the field. There are some that will do extra damage if you perform a perfect parry, or stun enemies if you do a perfect dodge in time and many other different perks to be discovered. You can also purchase new skins for your characters to give them a different color palette. They can be bought using an in-game currency which you earn from completing missions.

If you are a fan of Kaiju games and films and like side-scrolling beat-em-up, then Dawn of the Monsters is surely a game that should be on your radar. I do hope that the game receives new content down the line like extra characters (like a Gorilla or wolf type character) and perhaps an update that allows four players to team up and really go to town and wreak absolute havoc. Still, as it is, Dawn Of The Monsters is actually pretty good fun.

Dawn Of The Monsters: (The Gameplay)