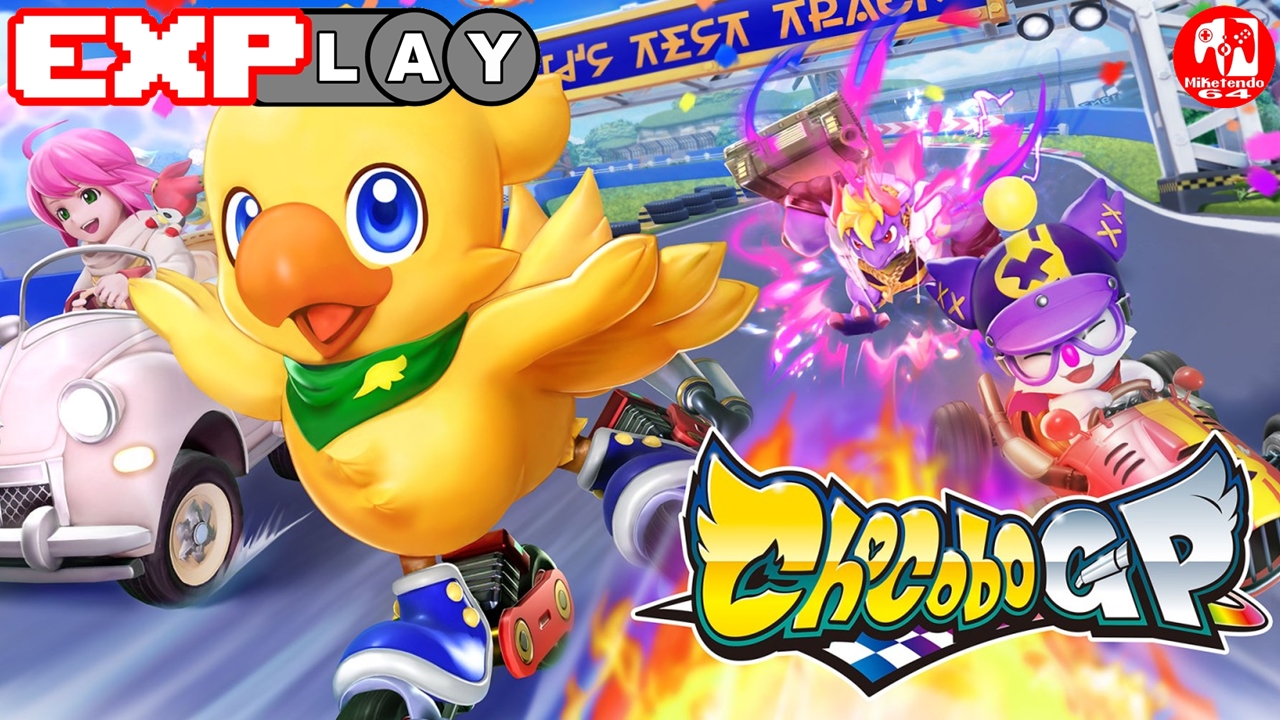 Welcome to EXPlay, (Explain & Play) the review series where we care not for scores but tell it how it is when it comes to every game we get our hands on, whilst also taking the time to include some lengthy gameplay, to give you the reader, the chance to shape your own impressions and views whilst watching and reading. In this installment, we’re covering Chocobo GP by developer Arika.

Chocobo GP is a spin-off title of the Final Fantasy series that is developed by Arika and published by Square Enix. It is a Nintendo Switch exclusive and a sequel to Chocobo Racing which, released on the Sony PlayStation back in 1999. The Switch game comes in two version with a Lite version (free to download) and a full-game “paid” version.

Chocobo GP is a party racing game in a similar vein to Mario Kart and Crash Team Racing, though the slight difference being that in in Chocobo GP, characters are not all confined to karts. Instead, some can, run, skate and even fly.  The objective of the game, is relatively simple. Race to the finish and try to win. There are a series of circuits that you must race around one and try and come first by the end of the third and final lap.

To help you get around the track and try and slow down the opposition, there are Magicite crystals and magic eggs. The Magicite crystals will allow you to pull off a special move unique to your character but only once you have collected enough. The magic eggs allow you to cast magic like fire balls, warp portals, wind magic and other spells that can change the tide of the race, how you use them will be up to you.

As, I mentioned before, Chocobo GP comes in two versions. The Lite version allows players to participate in online races and undertake the first chapter in Story Mode. You are also rather limited to which racer you can use. The full version gives players access to all the features in the game but does not include instant access to the prizes available during events. You have to use a special currency called Mythril and can choose to pay a large amount in order to gain access to certain prizes early or pay a reduced amount and grind your way for prizes by levelling up. Mythril can be purchased with real-world currency which, I will talk more about that later.

Though the online mode Chocobo GP is perhaps the game’s main game mode there are a number of offline modes like Story Mode, Time Attack, Series Races, Custom Race, and Multiplayer. Story Mode is basically one great big tutorial and is where you will unlock Chocobo GP’s base roster of characters. Most of the characters will simply join you after beating them in a race in Story Mode while the other characters have to be purchased via the in-game shop.

Speaking of the shop, you can purchase characters as mentioned, as well as better vehicles for your characters, color palettes, stickers, and backgrounds. The shop comes in three parts and uses different currencies for each part. One shop uses Gil, another uses Tickets and the third is Mythril (which I spoke of earlier). The first two can be earned in-game by meeting the right victory conditions in Story Mode stages or by completing challenges. In order to acquire Mythril though, you can sometimes get it as part of an event bonus or by taking a visit to the Nintendo eShop page and purchasing one of the several Mythril packs on offer. A lot of people have complained about this, including those who have bought the full version and are having to spend even more money with micro-transactions and I must admit that I am not too happy with this either.

As for the other game modes like Series Race, these just help offer other kinds of modes for players to try their hand at. Series race is much like Mario Kart’s Grand Prix mode where there are a number of cups made up of four tracks that you can participate in on your own or with another player against CPU. The Time Attack is a Time Trial mode where you can try and set the best time or race against another player’s ghost times (a download is required for that).

For the most part though, players will probably stick to the Chocobo GP mode. It is a series of online races set in a tournament bracket. 64 players compete against each other in a set of 8-player races. Whoever is placed within the top four positions will move up into the next bracket until they reach the finals and then it is a race for pole position. These races will really throw everything at you so you have to bring your A-game as there are already so many expert players dominating the race tracks.

In my opinion, Chocobo GP is a mixed bag. I enjoy karting games and there is fun to be had but there are a few things I can’t really get on board with. I am not too fussed with the characters themselves though there are some that I have no clue who or what they are but fans of the series will have better knowledge of them than I. I was not too keen on the Story Mode. there were a lot of cut-scenes in-between each race and some of them did drag on a little bit. There was also a running gag that just got unfunnier and unfunnier the more it went on and I was just glad to have finished the Story Mode and have it well behind me. It was a shame as there were a number of voice talents including the likes of Cristina Vee Venezuela and Sean Chiplock who I like but a lot of the times, the dialogue between some characters would just go on for such a long time that I just had to press the skip button.

If you are a fan of the Final Fantasy series and are a fan of the original PlayStation game, you might get a kick out of this one but if you aren’t and already own Mario Kart 8 Deluxe or CTR Crash Team Racing, you are better off just playing them instead.