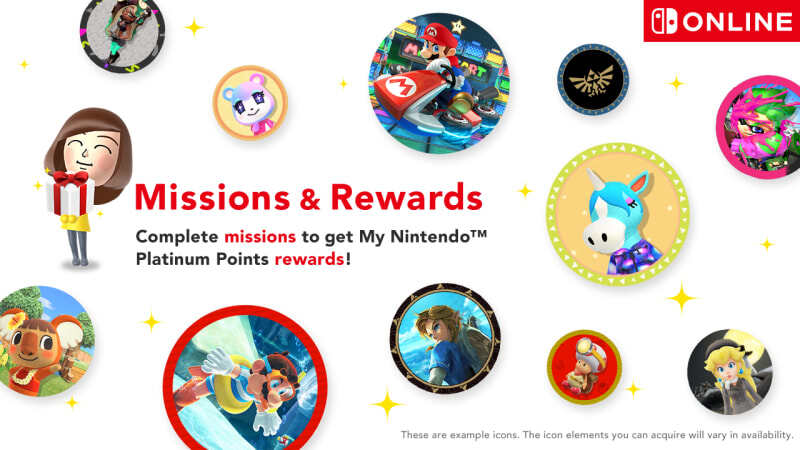 The Nintendo Switch Online App on the Nintendo Switch has had a new update that includes missions and rewards as well as giving a new lease of life to My Nintendo Platinum Points. Every week, there will be four missions for you to undertake that will reward you with My Nintendo Platinum Points. You can use these points to redeem certain rewards on My Nintendo but most specifically, these can be used to redeem characters, frames and backgrounds to make your own customized profile icons.

It may still seem like a misstep for those who are still wanting Switch home themes but hopefully, this is a step in the right direction that will eventually lead to being able to use My Nintendo points to redeem said themes in the near future (we are doubtful yet hopeful). The themes of the icons will change every month with some being updated weekly. To kick off March, we have Super Mario Odyssey and Animal Crossing New Horizons themes. The Super Mario Odyssey characters, frames, and backgrounds will be changed weekly and will be reflective of the different kingdoms of the game. As regards Animal Crossing New Horizons, these will be changed once a month and reflect on the villagers that have birthdays in that given month.

As for the missions, these seem to refresh weekly and pertain to playing a game that requires online play, backing up your save data to the cloud, and logging into the Nintendo Switch Online app on the Switch. The fourth mission requires you to play a specific game during the month and will change monthly. This month’s game, for example, is Super Mario Bros. on the NES – Nintendo Switch Online.

What do you think of this feature for Nintendo Switch Online on Nintendo Switch? will you be making use of the missions and rewards feature? Do let us know in the comments.