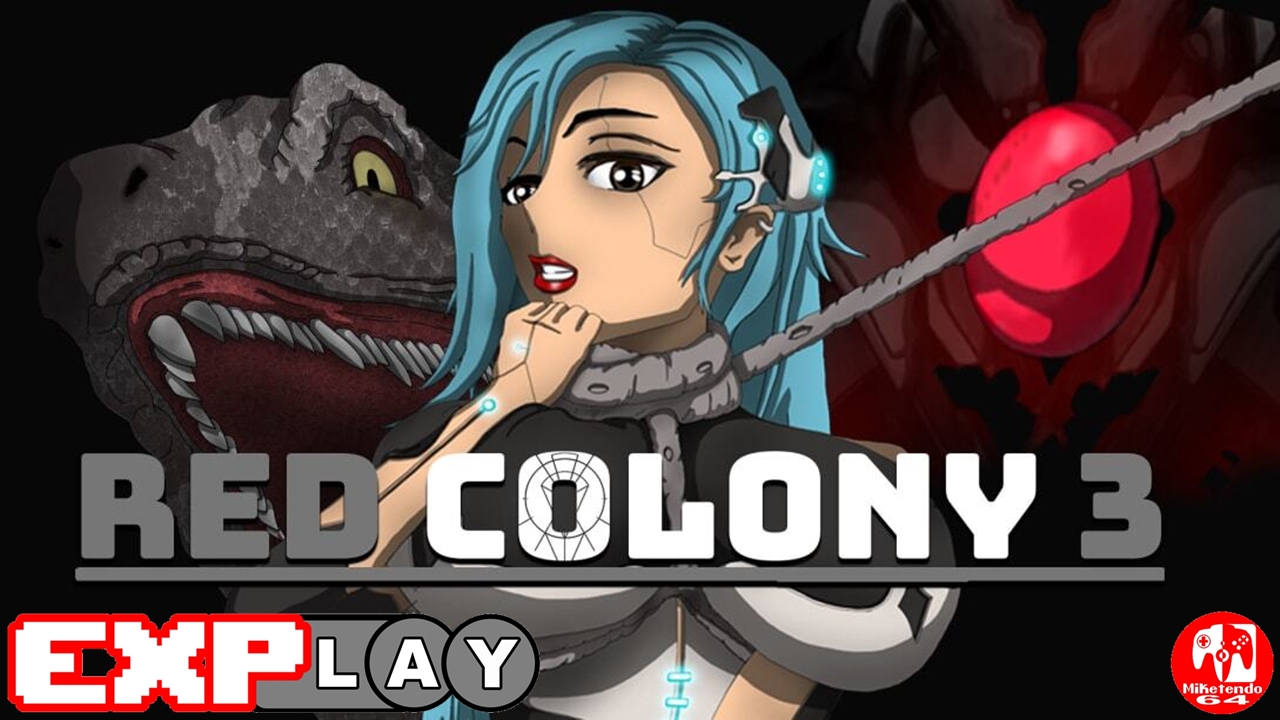 Welcome to EXPlay, (Explain & Play) the review series where we care not for scores but tell it how it is when it comes to every game we get our hands on, whilst also taking the time to include some lengthy gameplay, to give you the reader, the chance to shape your own impressions and views whilst watching and reading. In this installment, we’re covering Red Colony 3 by developer RunicCodes.

Red Colony 3 is the final instalment in the Red Colony series. It is a 2D Ecchi Horror game inspired by the likes of Resident Evil and Dino Crisis, and developed by lone developer Rune Shimotsuji Storm of RunicCodes. In the first game, there were zombies on Mars. Red Colony 2 introduced Dinosaurs into the mix and now to really change things up, Red Colony 3 brings all of the above as well as sexy android women AND Zombie Robot Dinosaurs! I mean, come on. Sexy android women and Zombie robot dinosaurs?!!! Sign me up!

Much like the previous instalments in the trilogy, the player takes control of a rather voluptuous protagonist. For Red Colony 3, it is Mina, A droid from the planet Titan who is looking to convert and find true love. Mina wakes up and finds herself in the scrapyard with no memory of how she got there. Mina has to make her way out of the scrapyard and find the body of her mortal lover Leon so she can restore his consciousness that she has downloaded to a hard drive.

If you are familiar with the other two games in the trilogy, you will pretty much know what you can expect in terms of gameplay. For those of you who haven’t played the other games, Red Colony 3 is a survival horror game where you must make your way from one area to another and find key items so you can progress to the next. You are unarmed at first but within the first few minutes of the game, you will find a pistol that you can use to defend yourself. The twist of however, is that ammunition is very limited so you have to be resourceful as to when to use the pistol or whether you can get past zombies some other way.

Speaking of zombies, there are three different types in the game. First off, are your bog standard slow zombies that with a couple of shots to the head will drop dead. Then there are what I call sprinter zombies that will run at you quickly, and lastly, there are cyborg zombies. Cyborg zombies can be dropped by shooting them in the four red lights on their head and body.

Due to needing to be shot four times, they are a waste on your resources and if there are any valves nearby that you can shoot, you are better off taking aim at them instead. These will expel gas which temporarily distract zombies and allow you to get by them. In some areas, you can also shoot the lightbulbs to make the room dark. You can then get around some zombies by crawling across the floor.

Puzzles make a return in this game in the form of coded safes and lockers. The passwords are usually nearby and can be quite obvious or quite obscure. These puzzles come in various forms from number or color codes or pushing levers into the correct positions. There are usually items like ammo or save sticks in safes and lockers so it is always worth opening up where and when you can. This is one area where you can get access to different outfits for Mina to wear. How you get the codes to open the lockers though, I shan’t reveal (in this EXPlay anyway).

For what Red Colony 3 is trying to go for, it won’t be winning any Game Awards any time soon but it will always have a special place in my heart (alongside the other two Red Colony games) as I am oddly attracted to its appeal. It is certainly B-Movie material that is rather crass at times with its over sexualized characters but the game is not trying to take itself seriously, regardless of the rather serious predicament that the characters find themselves and I wouldn’t have it any other way.

One thing that I do have to bring up is that a few bugs have made their way into the game including some weird frame rate drops in certain areas. I have addressed these issues to the developer and he is working on getting them sorted so hopefully you won’t have to experience them yourself.

I personally enjoyed playing Red Colony 3 and I particularly liked the twists in the game (I won’t reveal what they are so you can appreciate them for yourself). It is not the strongest entry in the series and there are a lot of things that I think Red Colony 2 does better than Red Colony 3. I was also expecting more of a climactic finish but I do appreciate and respect the developer’s decision to end the story how it did.

Red Colony 3 is not a very long game and will only take a few hours at most to finish. I must admit that for as much as I enjoyed it personally (even with some of the issues I experienced) it is rather difficult to highly recommend it to other players, especially to anyone who hasn’t even played the other two games in the trilogy. I would say you should definitely play Red Colony and Red Colony 2 beforehand so you know what you are getting into with Red Colony 3