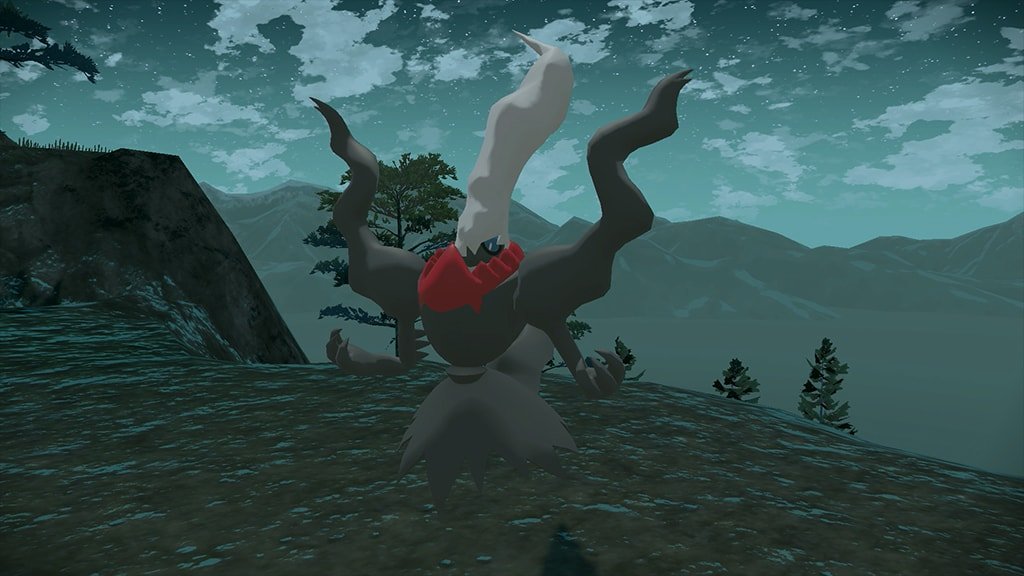 Another Mythical to add to the collection…

With details on how to obtain Shaymin (Land Forme) in Pokémon Legends: Arceus previously announced, now with a new trailer out for the upcoming adventure, details have now been shared in how to obtain Darkrai in-game as well and we’re sharing them right here:

If you have play records from the Pokémon Brilliant Diamond or Pokémon Shining Pearl games, you’ll be able to take on a research request in Pokémon Legends: Arceus in which you’ll have a chance to add the Mythical Pokémon Darkrai to your team.

This research request will be available for you to accept in Jubilife Village after viewing the game’s end credits.

What’s more, players will also be able to get a special outfit as well, which sadly, is not based on Darkrai:

You can claim this outfit by speaking to the clothier after joining the Galaxy Expedition Team. (It takes approximately one hour of play time to reach the point where this option is available.)

Get ready for a new kind of grand, Pokémon adventure in Pokémon™ Legends: Arceus, a brand-new game from Game Freak that blends action and exploration with the RPG roots of the Pokémon series. Embark on survey missions in the ancient Hisui region. Explore natural expanses to catch wild Pokémon by learning their behavior, sneaking up, and throwing a well-aimed Poké Ball™. You can also toss the Poké Ball containing your ally Pokémon near a wild Pokémon to seamlessly enter battle.

Travel to the Hisui region—the Sinnoh of old—and build the region’s first Pokédex – Your adventure takes place in the expansive natural majesty of the Hisui region, where you are tasked with studying Pokémon to complete the region’s first Pokédex. Mount Coronet rises from the center, surrounded on all sides by areas with distinct environments. In this era—long before the events of the Pokémon Brilliant Diamond and Pokémon Shining Pearl games—you can find newly discovered Pokémon like Wyrdeer, an evolution of Stantler, and new regional forms like Hisuian Growlithe, Hisuian Zorua, and Hisuian Zoroark! Along the way, uncover the mystery surrounding the Mythical Pokémon known as Arceus.

Preorder for a special in-game costume and download the digital version for Heavy Balls! – The Hisuian Growlithe Kimono Set and a Baneful Fox Mask will be gifted to early purchasers of the Pokémon Legends: Arceus game. You can receive it by choosing Get via internet in the Mystery Gifts* feature in your game, up until May 9th, 2022 at 4:59pm PT. Additionally, players who purchase and download the game before May 9th, 2022 at 4:59pm PT from Nintendo eShop will get an email with a code for 30 Heavy Balls which can be redeemed through the Mystery Gifts* feature until May 16th, 2022 at 4:59pm PT. Heavy Balls have a higher catch rate than regular Poké Balls, but you can’t throw them quite as far.