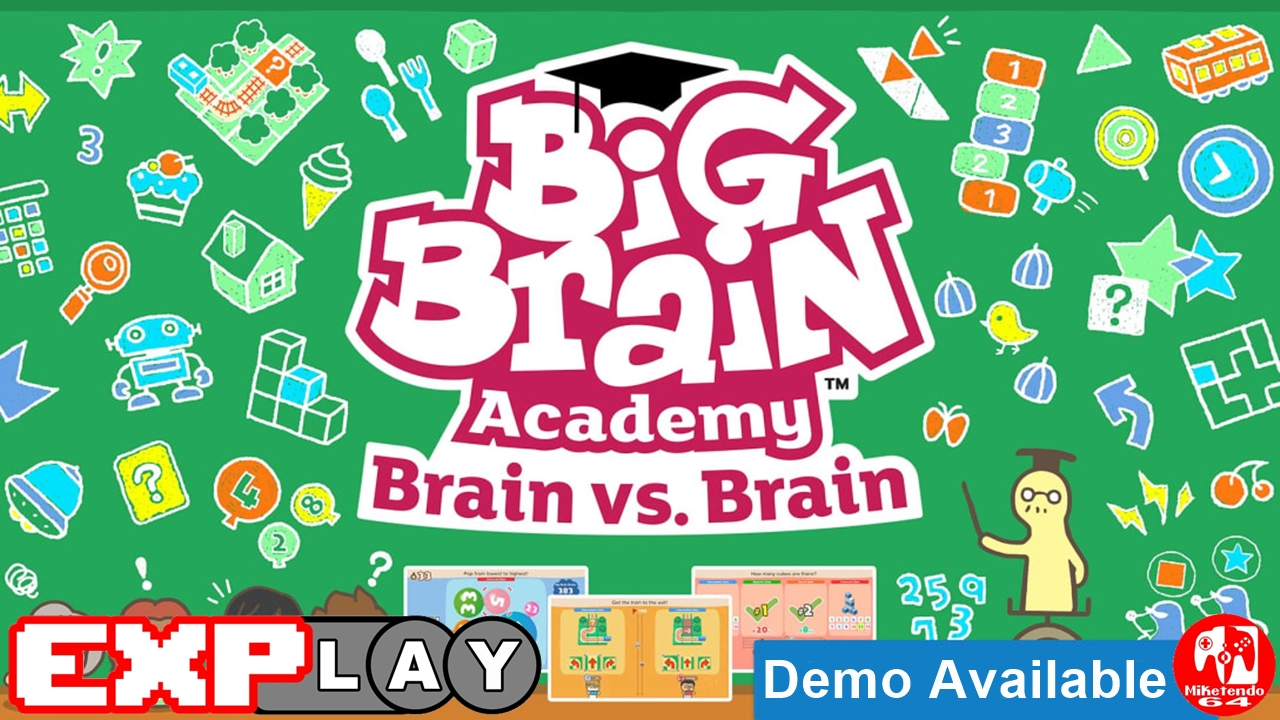 Welcome to EXPlay, (Explain & Play) the review series where we care not for scores but tell it how it is when it comes to every game we get our hands on, whilst also taking the time to include some lengthy gameplay, to give you the reader, the chance to shape your own impressions and views whilst watching and reading. In this installment, we’re covering Big Brain Academy: Brain vs. Brain by Nintendo EPD.

Big Brain Academy is essentially cut from the same tree as Dr. Kawashima’s Brain Training. Both games are focused on providing logical puzzles to wrap your brain around and get those synapses snapping. The difference between these games is that Dr. Kawashima’s Brain Training is aim towards adults while Big Brain Academy is more accessible for a younger audience. Another difference is that Dr. K’s is also designed around being a single player experience where as Big Brain is designed with multiplayer in mind.

Big Brain Academy: Brain vs. Brain tests your brain with five categories. These are Identify, Memory, Analysis, Compute, and Visualize. Each of the five categories consist of four types of exercises making up a total of 20 different exercises to play and they can either be played with button controls or touchscreen. Each exercise lasts for 60 seconds and you must correctly respond to each question/problem. You earn points for correct answers and lose points for incorrect answers.

The difficulty in each exercise starts low with sprout class but after consecutive correct answers, the difficulty will increase to the next class a progressively do so until you reach the Super Elite class. Wrong answers however, will drop you down a class so try to avoid making mistakes where possible.

As you play through the activities, you can earn coins. When you have earned 10 coins, you will be rewarded with a customization item that you can use to alter the appearance of your avatar. What you get is randomized so there is no way in really knowing what you will get. What I can tell you is that some items are part of a set so you will be able to dress your avatar up like an astronaut, a detective, a pop singer, or even a king.

Big Brain Academy has four main game modes for solo play and a single competitive mode for multiplayer. The four main game modes to play with three available from the start and one mode that needs to be unlocked. Practice mode is you can play any of the 20 exercises and aim to get the best score in each of them. You can earn Silver, Gold or Platinum Lobe Medals depending on your score at the end of each exercise.

The Test mode has you take on five randomly chosen exercises from each of the five categories to test your overall Brain Brawn Score. Your Brain Brawn Score will be ranked and Dr. Lobe will give you advice on which category you may need to focus on to improve in that area,

Ghost Clash mode has you compete against the best scores of your friends, family, and those around the world by playing against their ghost. You can’t directly play with other people online but on the plus side there is no lag to be concerned with and provides a pretty smooth experience. As for the fourth game mode, it has to be unlocked first so as to not spoil what it is, we will let you figure it out on your own.

When it comes to multiplayer, up to four people can play together on a single console. Two players can play using either button controls or with touch controls with the switch console lying down on a flat surface. Three or four players are restricted to using button controls only. There are two ways to play in multiplayer. You can manually choose categories and exercises or spin the wheel and have an activity chosen at random.

Big Brain Academy on the Wii was a game that I played a lot of many moons ago and I was excited to see the series make a return on Nintendo Switch. The exercises are challenging, fun, and oh so addictive. Getting Gold Medals is easy enough after a bit of practice but those coveted Platinum medals are what it is really all about. Big Brain Academy: Brain vs. Brain is an absolute gem and will certainly have you coming back again and again so you can improve upon your own high scores, or, show your friends and family who really has the brawniest brain.