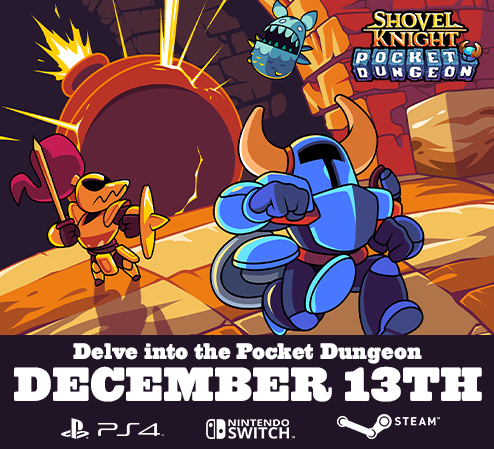 Yacht Club Games has announced the release date of their upcoming Shovel Knight adventure, Shovel Knight Pocket Dungeon. The puzzle game will launch across all platforms (including Nintendo Switch) on December 13th and will be priced at $19.99 USD. Yacht Club has also revealed that they have three DLC packs to keep the came rich with content post-release.

If you would like to know more about Shovel Knight Pocket Dungeon, we have the official announcement from Yacht Club Games below.

We’re ecstatic to announce that Shovel Knight Pocket Dungeon will launch on December 13th! A lot of hard work, joy, tears, dancing, and love went into this game’s 3 year development…it truly was a passion project to bring a new type of puzzle game to the world, and we can’t wait for you to all experience its every moment. Hopefully, you have as much fun playing as we had in the development. We’ll continue to post more info about our puzzle action-adventure as launch approaches so make sure to check back frequently!

We have one more fun thing to reveal today! We loved developing and playing this game so much, we just can’t get enough, and we don’t think you’ll be able to either! That’s why we’re planning on releasing an expansive slate of downloadable content (3 DLC packs!) over the next year or so. Much more will be revealed soon after release.