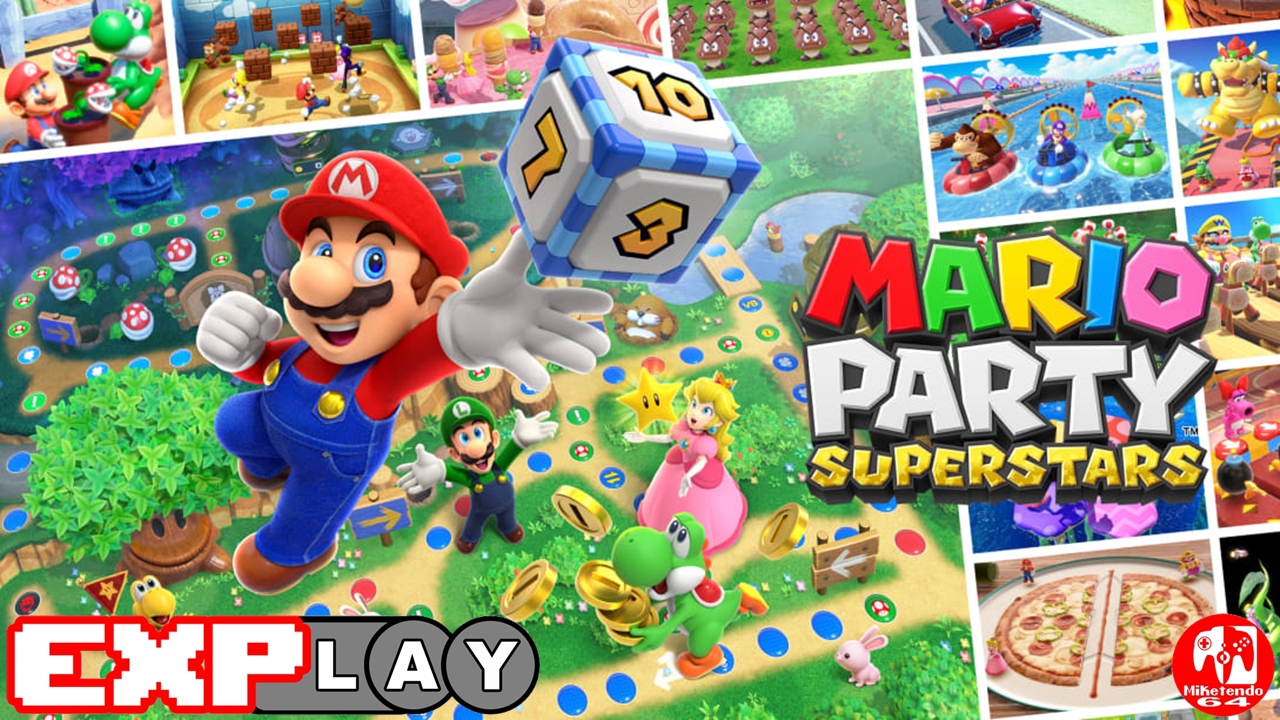 Welcome to EXPlay, (Explain & Play) the review series where we care not for scores but tell it how it is when it comes to every game we get our hands on, whilst also taking the time to include some lengthy gameplay, to give you the reader, the chance to shape your own impressions and views whilst watching and reading. In this installment, we’re covering Mario Party Superstars by developer Nintendo.

Mario is joined by Luigi, Peach, Daisy, Rosalina, Yoshi, Donkey Kong, Wario, Waluigi, and Birdo for some good old fun and minigame mayhem in an all-new instalment in the Mario Party series. Mario Party Superstars is a collection of boards and minigames from classic Mario Party games from the Nintendo 64 and GameCube eras.

Up to four players can play together either locally, via local wireless, or online. In classic Mario Party fashion, each player takes it in turns to roll a dice and move the number of spaces that was indicated on the dice around one of five themed boards in the hopes of collecting coins so they can purchase stars.

Before jumping into a session though, players can choose their characters and the host can select the parameters like how many rounds can be played, if bonus stars will be given out at the end of the round, if instructions are given before each minigame, and if players begin with a handicap by already having stars before starting the game.

As for the boards themselves, each board is made up of several different spaces. The blue spaces will reward players with coins and the red spaces will take coins away. The lucky space (indicated by a four leaf clover icon) prompts players to stop a roulette that can reward players with one of several bonuses like a mushroom item or coins. Other spaces on the board include event spaces, Bowser spaces, swap spaces, and VS. spaces.

In between some spaces, there are obligatory stops that can be worth a players time like the Toad’s item shop that has items for players to purchase that might help them in later turns. Stopping by Toadette will net you a star for the price of 20 coins. On some boards, you may even encounter Bowser himself, who will strong arm you into giving up your coins in exchange for an overpriced and sometimes defective item.

Once everyone has moved around the board, it is the end of the turn and players will take part in a minigame. Minigames are selected at random but you can filter the types of minigames you would like to play at the start of a session. The minigames are divided into six sub groups: All, Nintendo 64, GameCube, Family, Action, and Skill.

When the minigame has finished, coins will be given to those who came first, second, and third with more coins going to the winner and less to those in second and third. The exception to the rule is when playing a coin minigame. You will keep any coins collected in these games and will not earn any more for winning. The game will then proceed to the next round and will continue on this pattern until all the final round is finished.

After the final round, Toad will announce the award ceremony to declare the winner or “Super Star” of the game. Before he does though, he does like to throw a curve ball into the mix and reward some bonus stars from a couple of random categories like “most travelled”, “most minigames won”, and “least lucky player”. These bonus stars can really turn a game around in Mario Party Superstars, especially if the competition was already pretty close.

If you enjoy playing the minigames, you don’t have to play a full game of Mario Party just to play a random few. You can go to Mt. Minigames which, has all 100 minigames available to play from the start without any need of unlocking them first. Mt Minigames is all about the minigames and has seven game modes built around them. There is the free play area where you can play any and all the minigames available in Mario Party Superstars. You also have Survival Mode, Daily Challenge, Tag Match (2 Vs. 2), Trio Challenge (1 Vs. 3), Coin Battle, and Sports & Puzzles. Each of these minigame modes offers a different range of minigames and challenges and can also be played locally or online.

Mario Party Superstars isn’t all about fleecing your friends and stealing their coins and stars, you can use the coins you have earned in games to buy items from the shop on the hub world menu. You can purchase stickers, that you can use in Mario Party to communicate with other players. You can also purchase music to listen to in Kamek’s Records house as well as encyclopedia pages that have interesting tidbits about the characters, boards and tips in the game.

As you play minigames and Mario Party sessions, you will also earn experience that will help you level up. Leveling up allows you to unlock more stickers and other items in the shop so be sure to check in every now and again in case something new is available for purchase.

During my time with the Mario Party Superstars, it has been a rather pleasant experience for the most part. The online sessions were actually very stable and I have played with both random people around the world and with friends. The minigame modes are fun enough on their own and can provide plenty of hours of fun with friends. However, much like with Super Mario Party, I find the limited amount of boards will lose their appeal after being played over and over again.

Yeah, I know Mario Party Superstars has five boards where as Super Mario Party only has four but I really do hope that Nintendo will support this game much like Mario Tennis Aces and Mario Golf Super Rush with extra content like more characters and boards.

On the whole, Mario Party Superstars is a fantastic blend of classic Mario Party games with the updated visuals of the modern instalments. It may lack some game modes like partner party or the controversial (and yet personal favourite of mine) amiibo party but it is still a lot of fun regardless. The ability to add extra rounds to your Mario Party sessions and large list of achievements to unlock will certainly keep the fun going and make sure the party doesn’t end any time soon.