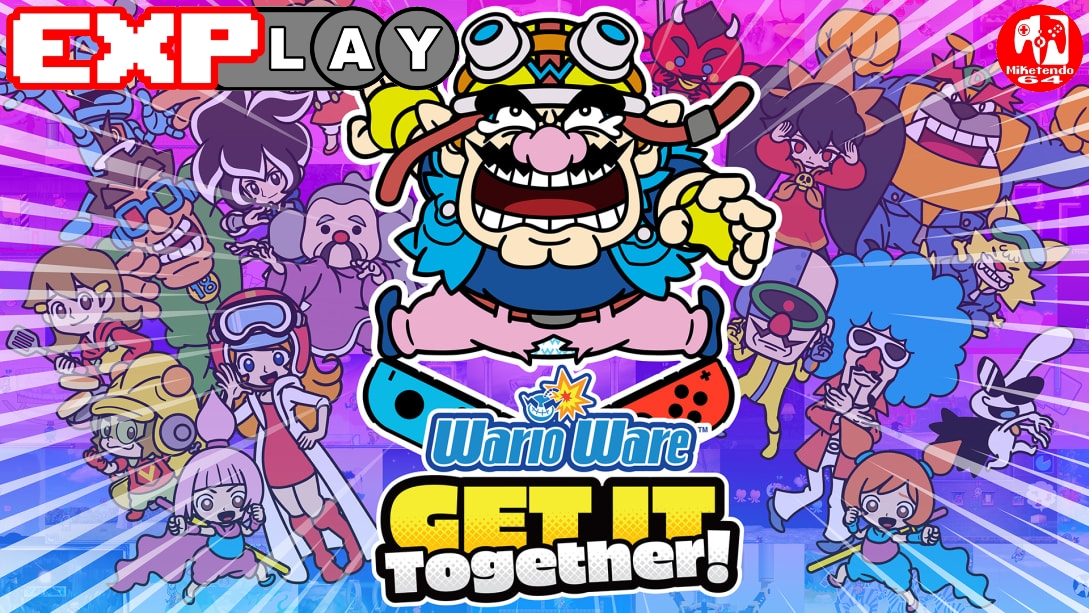 [EXPlay] WarioWare: Get it Together! (Nintendo Switch)

Welcome to EXPlay, (Explain & Play) the review series where we care not for scores but tell it how it is when it comes to every game we get our hands on, whilst also taking the time to include some lengthy gameplay, to give you the reader, the chance to shape your own impressions and views whilst watching and reading. In this instalment, we’re covering the WarioWare: Get it Together! by Intelligent Systems and Nintendo EPD.

WarioWare: Get it Together!: (The Explanation)

Wario and the gang are back with an all-new set of crazily-themed microgames for us to endure, I mean enjoy in WarioWare: Get It Together! From their own video game development studio in Diamond City, Wario and his friends have created their very own video game. As Wario playtests the game on his handheld console, it starts to glitch out. Frustrated, Wario throws the console and all of a sudden, it goes berserk, and sucks up everybody in the studio, transporting them to a virtual world inside the console.

In typical WarioWare fashion, the aim of the game is to beat a series of microgames. By successfully completing them, you will be able to move onto the next stage. This is the main premise of most of the game modes, including Story Mode. If you fail however, you will lose a life. You start with four lives but if you lose them all, you will lose the game.

If you can successfuly chain a number of stages together (10-15 depending on each level) you will eventually reach the Boss Stage. These are slightly longer stages but a single mistake can still cost you a life. If you beat them, however, you can earn a life back. As you play through each level once in Story Mode, the level will end after beating the boss once. You can then go back and play the stage again and keep going until you lose all your lives in the hopes to set the best score for each level.

Every WarioWare game that has come before has had some kind of gimmick, like WarioWare: Smooth Moves on the Wii that used Motion Controls or WarioWare: Twisted on the Gameboy Advance using tilt controls. WarioWare: Get It Together! has its own set of gimmicks but not it doesn’t rely on motion or gyroscopic controls. It instead focuses on two-player co-operative (and sometimes competitive) multiplayer and tasks the player to take control of a character and use their unique actions to complete Microgames.

As you begin WarioWare: Get It Together!, you will only have Wario at your disposal as a playable character and can only play through Story Mode. As you make your way through each level in Story Mode, you will find and unlock new characters that you will be able to play as. Each character from the WarioWare Universe (no Super Mario or even Waluigi here, I’m afraid) has a unique action. For Example, Wario can move around using a Jetpack and can shoulder bash into things. Young Cricket can jump really high and 18-Volt, while inmobile can fire discs from his head and use them to pull himself up onto hoops.

As for the Microgames themselves, there are over 200 microgames and are categorized under several different themes. These include Nature, Food, That’s Life, Nintendo Classics, and Fantasy (there are more but I don’t want to spoil too much for you). Every microgame that you have played in Story Mode becomes openly available to play in the Play-o-pedia mode.

This mode allows you to play single microgames repeatedly on varying levels of difficulty as they get gradually harder and faster each time. As each Microgame is categorized in their respective themes, if you are missing any, you can simply replay the necessary level in Story Mode until you find the level you are missing.

Some of these are their own kind of game like Gotta Bounce that has players try to keep the ball in the air and Frenemy Frenzy that has players duel against each other in the hopes to lower the other players HP before time runs out. Other game modes have players compete against each other with a series of microgames and whoever beats the most microgames will be crowned the Winner.

As for Wario Cup, this is a weekly challenge mode that sets up a challenge for the week with certain parameters. The challenges can be like “Only able to use a particular character on a set difficulty level and speed. By taking part in the challenge and beating as many microgames as you can, you will rack up a score. If you get a high enough score, you can earn rewards like points and items that you can use on your characters.

Speaking of points and items. You can use your points to purchase items in the Emporium. You can then use them on your Crew members to increase their job titles. As you do this, you will gain access to customization items for that character and unlock character artwork. You will also increase their Wario Base Cup score which will make it just that little bit easier to get a decent high score during the Wario Cup challenges.

Honestly, I could go on and on about this game as I have merely scratched the surface but I won’t as it is truly a game that is best experienced directly. WarioWare: Get It Together is just as madcap as its previous instalments and the added multiplayer aspect makes it all the more fun. Even if you can’t wrangle a few friends to play with you, you can still have a great time pluging up nostrils, tweezing armpit hairs and covering cat poop on your own. The game also does a bang up job of proving that you don’t have to waggle controllers around to have a good time either.

WarioWare: Get It Together is such an absurd yet ridiculously fun game that should a part of any Switch owner’s game library but don’t just take my word for it. A free demo for the game is available on the Nintendo Switch eShop so you can try it out for yourself right now. I will add that if WarioWare: Get It Together can make it to No.1 in the UK Videog Game Charts in it’s first week, then it must be doing something right.

WarioWare: Get it Together!: (The Gameplay)