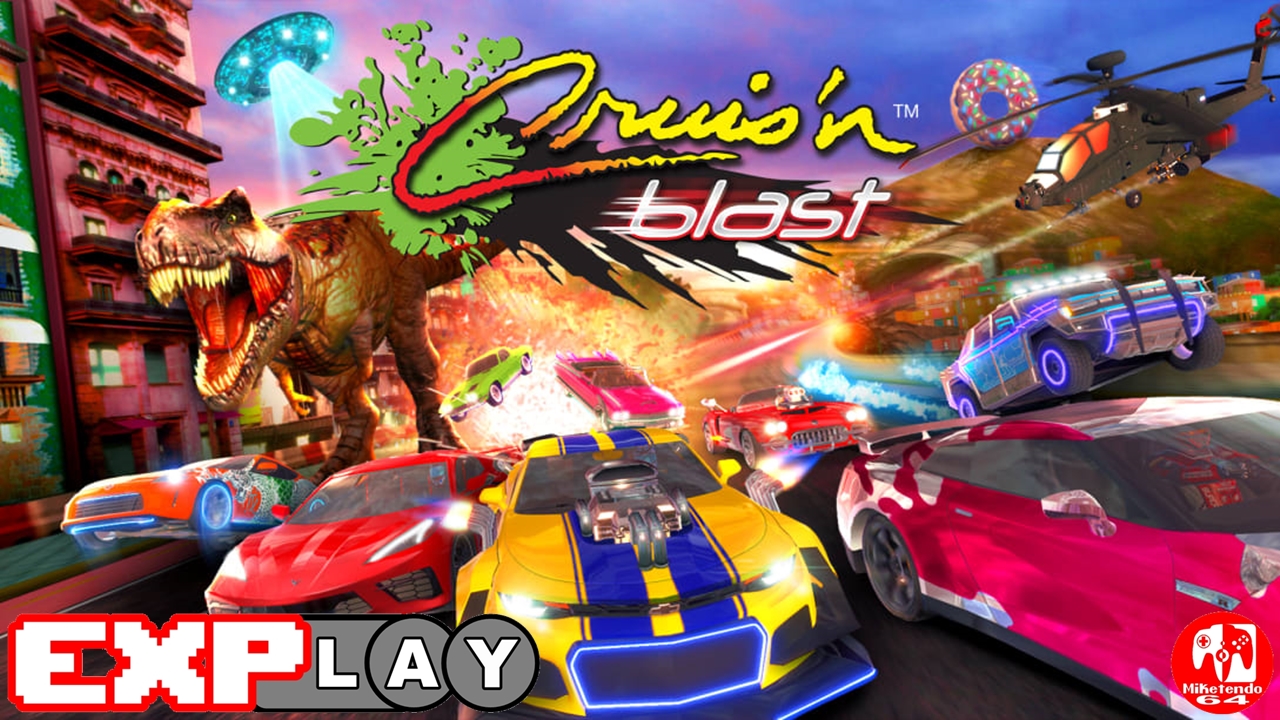 Welcome to EXPlay, (Explain & Play) the review series where we care not for scores but tell it how it is when it comes to every game we get our hands on, whilst also taking the time to include some lengthy gameplay, to give you the reader, the chance to shape your own impressions and views whilst watching and reading. In this installment, we’re covering Cruis’n Blast by developer Raw Thrills.

Cruis’n Blast is a chaotic arcade racing game with fast cars, competitive AI, and some insane visual effects. Race around the world at iconic locations like the streets of London, Hollywood, and Singapore and then through the jungle of Madagascar or the peaks of the Himalayas whilst avoiding hazards like Police Cars, Yetis, Dinosaurs, and UFOs. We did mention it was chaotic, right?

Whether you play alone or with others, the goal of Cruis’n Blast is the same; Get to the finish line and preferably in first place. As you race around each track, you will need to use skill and some well timed tricks to get ahead of the competition. For example, by pressing the A button twice in succession, you can make your car do a wheelie. It gets a small boost and if you do it right up behind another car, you can somersault right over them. You can also wheelie up ramps to perform a backflip and gain a bit more speed.

At the beginning of each race, you will also have a limited amount of boost (you can top this up at the car selection screen by purchasing extra boost). You can use the Boost by pressing the L button and it will temporarily increase your speed so you can overtake those who are in front of your or close the gap between you and those further ahead than you. Drifting is also an important technique as it can also give you a speed boost without using your boost canisters. Be careful not to bump into anything as you drift as it will annul your drift boost which, can cost you critical seconds in getting/maintaining the lead.

Cruis’n Blast has several single-player game modes including the tournament mode Cruis’n Tour, in which you compete against 9 CPU racers through a series of cups that consist of four races in each. You can select the difficulty to be either Easy or Normal at the start as the harder difficulties are locked until you clear certain difficulties with top marks (Gold).

The other single-player game modes are Classic Arcade, Time Trials, and Single Race. Classic Arcade features six classic tracks from previous entries in the Cruis’n series. Single Race has you race on any of the tracks you have unlocked in Cruis’n Tour and on their respective difficulties. This means that if you have only unlocked a track on Easy, you won’t be able to play it on the Normal difficulty until you have beaten it on Normal. Time Trials is much like in any other racing game in that it has you race as fast as you can to get the best possible time.

As for Multiplayer, Up to four players can get together for local split-screen multiplayer or Local Wireless. The Multiplayer Modes offer similar game modes as the single player mode does with Cruis’n Tour, Classic Arcade, and Single Race. Where it differs is that Time Trials has been replaced with another mode called First To Three. This game mode has player compete in a series of races and the first player to get three wins is the winner.

Cruis’n Blast has 23 different vehicles with five available from the start and more waiting to be unlocked. The vehicles range from officially licensed cars like the Corvette Stingray or GMC Hummer EV to more bizarre vehicles like a Unicorn or UFO. To unlock vehicles, you have to beat certain tracks or cups and then spend cash that you earn from races or use keys that you find hidden through each track.

All vehicles can then be levelled up and upgraded with different cosmetic effects like Neon underlighting, Decals, Body Kits and Engine. To level up vehicles, they need to be used in races and you will earn XP depending on how well you ranked in a race. One cosmetic that is available from the start though is the Paint job so you can choose your preferred coloring of the car you wish to race in.

Cruis’n Blast is definitely a game that says exactly what it is on the Tin. It is a blast to play and the AI are certainly cruis’n for a bruising. I have played plenty of arcade racers in my time but none have been quite so challenging yet still completely enjoyable to play than Cruis’n Blast.