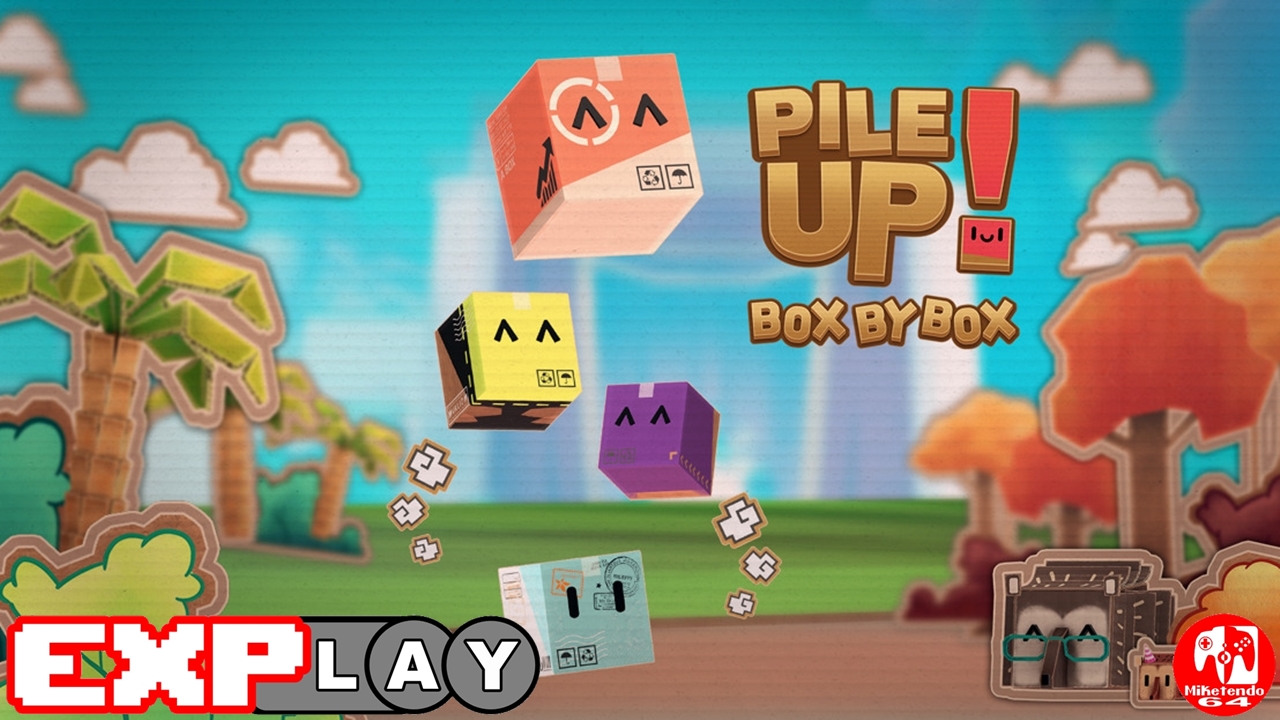 Welcome to EXPlay, (Explain & Play) the review series where we care not for scores but tell it how it is when it comes to every game we get our hands on, whilst also taking the time to include some lengthy gameplay, to give you the reader, the chance to shape your own impressions and views whilst watching and reading. In this installment, we’re covering Pile Up! Box By Box by developer Seed by Seed.

Pile Up! Box by Box: (The Explanation)

Pile Up! Box by Box has you playing as a box, yup a box, no hands, no feet. The game opens up with a mysterious loss of color across the game’s four main worlds and you are tasked with bringing color back. In a gameplay troupe reminiscent of the recent Paper Mario™: The Origami King, entering through each world’s portal takes you through a region in the game requiring you to complete puzzles and restore color.

Your basic move set allows you to jump, dash, and stack or toss boxes. While this sounds limited, the unique way in which you will move through the zones requires a bit of critical thinking. Throughout your journey you may come across boxes and items that also have abilities. These abilities vary from being able to hover, a sticky frog tongue that can pull you towards things, a spring for reaching higher areas, and more.

Pile Up! Box by Box has a tactile cardboard cut out look and feel that makes you feel like you are in a Paper Mario™ or Yoshi game. The world aesthetics were enjoyable enough and drew myself and my daughters in as we played together. As I mentioned earlier the game is better with couch co-op. With up to four players you can move through each screen of the world together solving puzzles, reaching heights, or jumping over chasms.

While you move screen to screen, which are typically locked behind a rolled up piece of cardboard that your entire team needs to be on to move forward, you pick up golden rolls, small box bits, and other items. These pickups go towards your overall purchase power at the shop where you can unlock new skins for your boxes and arcade multiplayer games for outside the main game.

The puzzles in Pile Up! Box by Box aren’t necessarily head scratchers, though some of them do require a bit of thinking. I am not sure if the intent was to get families together to play or if the puzzles themselves are just obtuse. I do feel like the general moment to moment game is easy, but an overall map of where you are in the portal world you enter into would have been helpful in navigating the environments which can begin to seem a bit samey.

While you can play the game completely in single-player mode, Pile Up! Box by Box is better with friends in couch co-op as you traverse the world, open gates, reveal floor pieces and more. I will say there can be a bit of ‘Overcooked’ style shenanigans during your playthrough if your couch co-op partners choose to do so. There were plenty of times that I fell to my death due to one of my daughters not staying put on a lever which led to my demise. Thankfully the game is light on penalizing you for falling into water, lava, or the great beyond, and you respawn immediately.

If you are looking for a cute, family-friendly game that can involve up to four players sitting together on the couch, Pile Up! Box by Box may just be the thing for you. The game isn’t long by any means and can most likely be completed in an afternoon of gaming. Though the multiplayer mini-games do offer some variety they were also short lived in our house. Pile Up! Box by Box is out on Nintendo Switch and other consoles right now. Happy Boxing Day!

Pile Up! Box by Box: (The Gameplay)