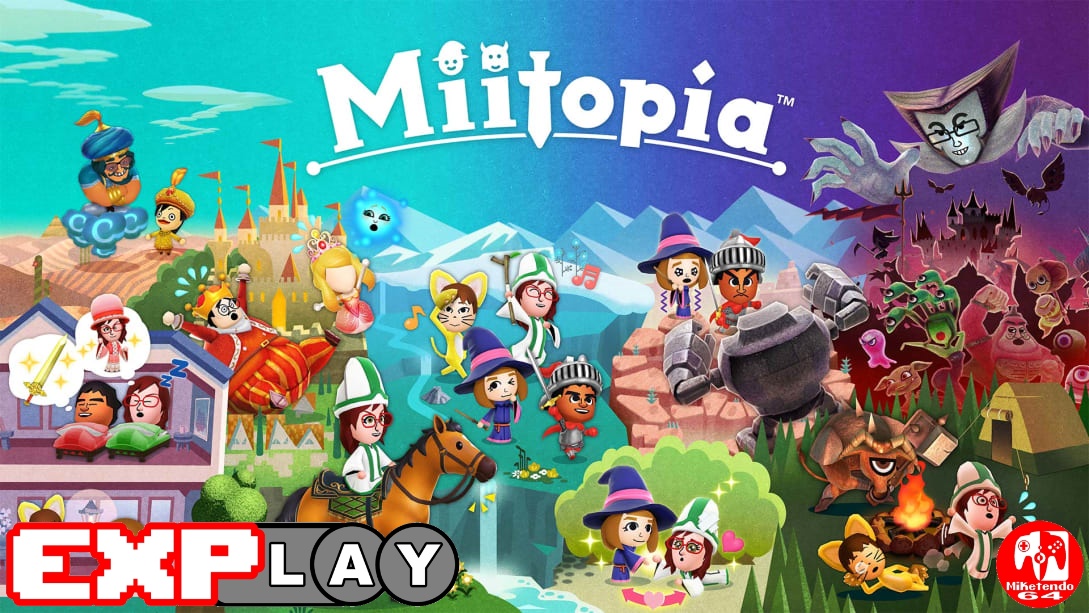 Welcome to EXPlay, (Explain & Play) the review series where we care not for scores but tell it how it is when it comes to every game we get our hands on, whilst also taking the time to include some lengthy gameplay, to give you the reader, the chance to shape your own impressions and views whilst watching and reading. In this instalment, we’re covering the Miitopia demo by Nintendo EPD and Grezzo.

It’s all about Mii, Mii, Mii, (Mii too) with Nintendo’s latest role-playing game for the Nintendo Switch, only this time, it’s a proper blast from the past. Having already successfully given select Wii U games a new lease of life on the Switch, with Miis sorely missing out on the fun, Nintendo only has opted to allow the 2016 3DS game, Miitopia to “Switch it Up!”. Only, it’s not Nintendo in the driving seat, but everyone’s favourite Nintendo remake/remaster studio, Grezzo.

It’s a colossal shame the mightily Grezzo have currently been able to bring the likes of their very own Ever Oasis, please do not let this sour note put you off giving Miitopia a chance because it truly is a game worth playing, even though the newer release comes with a bigger price tag.

While it is a shame players are unable to use Street Pass this time around and give the likes of official Nintendo Miis (Reggie, Aonuma and Miyamoto), key roles, there is still no denying Miitopia is a charming RPG worth revisiting. It might look simple on the surface, but it is still a charming adventure throughout that takes most of everything fans loved about Tomadachi Life, but served alongside an RPG twist.

After all, this is still the Mii orientated game that gives players the chance to be the stars in their very own game, and due to having a very limited selection of Miis on my Switch and recently watched the entire Matrix trilogy, I couldn’t help but take this new opportunity and make the majority of game’s colourful characters, me. (I know, I’m so vain, I probably think this song is about me.) Admittedly, as the gameplay video shared alongside this article will show, not every character ended up being me as some are family members, but once again the character exchanges and writing that continues to shine, are exceedingly brilliant.

So what if the game’s literal plot is an evil Dark Lord going around stealing Mii’s faces, they might have deserved it. The story might seem flimsy, but the writing is in a class of its own that is very similar to that of Paper Mario games. As for the gameplay, on top of turn-based ailments comprised of the regular status ailments, skills, recovery items and regular attacks, there’s also random encounters, dungeon exploration and character building.

Use the right food items and your beloved characters will be rewarded greatly for the experience, they can also be made to share rooms at an inn to bond as a team, go off on little voyages and there are plenty of other interactions to be enjoyed. Miis buying other Miis presents, Miis getting jealous and Miis growing closer together, taking their deepened from the inn and into battle by offering warnings, showing compassion, or just being too cool to take a hit.

Then, of course, there’s my little pony and by pony, I mean a horse that is so customizable that players can alter its “mane, tail, saddle, body type, and more.” Clearly, someone called the cavalry and it is well worth it as this long adventure still comes packed with 25-40 hours of gameplay to experience thanks to many weapon types, outfits, amiibo costumes and so much more.

The biggest and most noticeable change of them all, however, is the game’s improved graphics, which have been upscaled and can be easily noticed in everything from Mii details, to locations, background visuals and typical game text. There’s also the addition of plenty of wigs to give even more life to each in-game Mii.

Not to be left out, the greatest change/improvement, however, has to be the Mii creation tools. Grezzo and Nintendo have taken them to a whole other level and there really is so much players can do with them. Why settle for mere Miis when it is possible to recreate some of your favourite characters?

There really is nothing quite like utilising a family member’s Mii and having a better or worse relationship with that family member in the game, compared to the one you have with them in the real world. With the demo, I made a lot of it about Mii (couldn’t resist), but I still included my partner, sister and mother and there is nothing funnier watching the three of them repeat actual discussions they’ve had in the real world and ones I wish they had.

Quite simply, Miitopia just gets better and better the more you play it and with the enhanced graphics available, there has never been a better time to play than right now, especially when there is a lengthy demo available in the eShop.