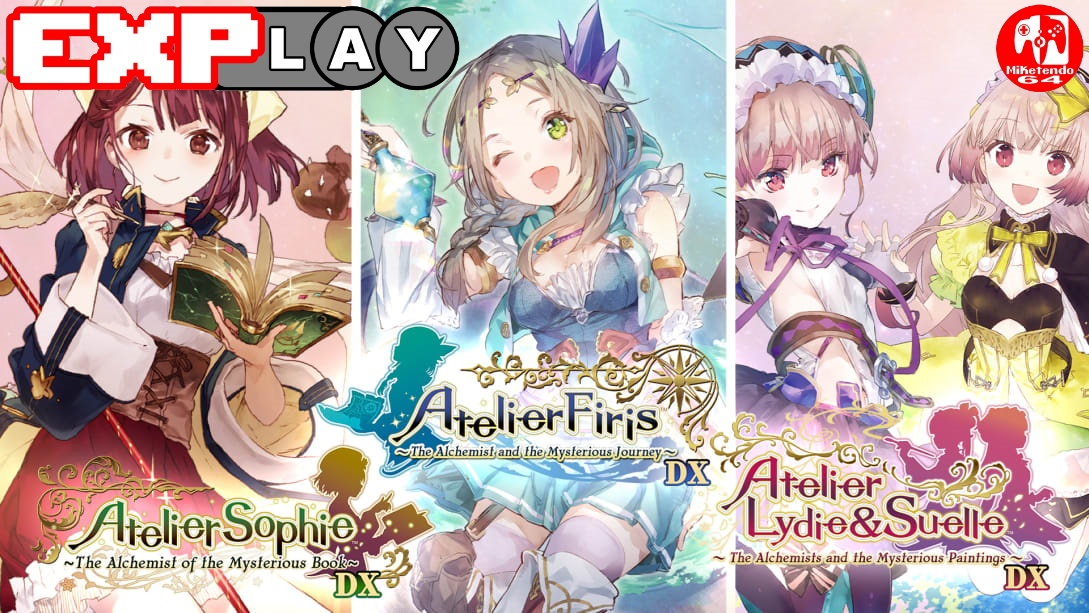 Welcome to EXPlay, (Explain & Play) the review series where we care not for scores but tell it how it is when it comes to every game we get our hands on, whilst also taking the time to include some lengthy gameplay, to give you the reader, the chance to shape your own impressions and views whilst watching and reading. In this instalment, we’re covering Atelier Mysterious Trilogy Deluxe Pack by developer Gust.

As a series that dates back to 1997 and consists of 22 main instalments divided across 7 sub-series, and then multiple side games and remakes & ports, for a long time, main series Atelier games were a stranger to Nintendo platforms. Yet, things soon changed in 2017 when the Nintendo Switch.

What’s more, on top of three Gust RPGs being given a DX polish, part of the upgrades also includes additional downloads in the form of Digital Art Books. Buyers of any of the DX games or the entire pack are free to download additional art books that show off various game illustrations and designs and gives series fans something to listen to, in the form of a soundtrack, with each different art book featuring a soundtrack associated to the game they come with.

Then of course there’s the newly added in-game content that makes each game deserving of their DX titles. For starters, every game in this trilogy pack now gives players the option to speed up battles, be able to sprint when adventuring, utilise a charming photo mode at their disposal and has packaged in previously released DLC. Yet, that’s not everything as the games also include some individual additions. For example, Atelier Sophie DX offers a new costume and cauldrons, whereas Atelier Firis DX possesses “four new vehicles/exploration tools to increase efficiency & speed!”

Whereas Atelier Lydie & Suelle DX features a new painting that is based on the world seen in Atelier side game “Nelke & the Legendary Alchemists: Ateliers of the New World,” which possesses additional story episodes and a new boss to battle, but there are also Nelke’s World painting fragments to be collected as well, but what of the actual games?

The Mysterious games are a sub-series of RPGs where players take control of aspiring alchemists, who know next to nothing or absolutely nothing when it comes to alchemy, but they don’t let this fact stop them from undertaking an adventure to call their own, especially when there are those willing to teach them. The majority of gameplay revolves around collecting materials useful for synthesizing concoctions, turn-based battles and exploring the very varied locations that appear in each title.

As a series, the three game’s feature plenty of similarities between one another but at the same time, there are plenty of differences that do help to give each game an individual feel that better highlights the unique aspects each game possesses such as the Dollmake feature in Atelier Sophie DX. As for the art style, as always, Gust are magnificent when it comes to character creation.

The attention to detail is exquisite as always, but some times their impressive design can put the background locations to shame. There’s plenty of intricate detail on show, but it pales in comparison. At least the upbeat soundtracks help to make up for this fact, along with easy to master gameplay controls.

Whether series fans opt to purchase all three games as part of the pack and at a discounted price or purchase each title separately, at long last Nintendo gamers can experience the full Mysterious sub-series of games and go hands-on with additional content, including the downloadable digital art books. There is plenty to lose yourself in and don’t worry, just because Sophie isn’t the main protagonist in all three titles, it doesn’t mean she doesn’t feature in all of them. There really is plenty of Sophie and Firis, to go around.