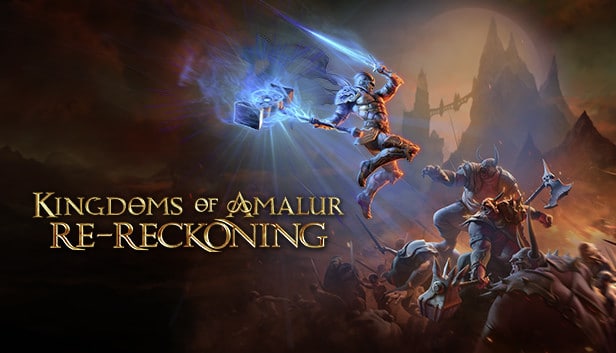 The history of Kingdoms of Amalur: Reckoning is quite a tumultuous one. This game released to decent acclaim but was tainted with developer issues when original developer 38 Studios, started by former Red Sox pitcher Curt Schilling filed for bankruptcy after releasing Kingdoms of Amalur: Reckoning. The title sold over a million copies, but after the company folded, it was up to the taxpayers of Rhode Island to foot the bill for a missed loan payment.

Released back in February 2012, Kingdoms of Amalur: Reckoning had some very well-known creative leaders behind its development. The addition of writer R.A. Salvatore and renowned artist Todd McFarlane, and Grant Kirkhope writing the musical score really created an amazing world and experience that was plagued with financial and legal issues after the game released.

Fast forward to 2020, Amalur’s official Twitter account confirmed the remaster, awkwardly titled Kingdoms of Amalur: Re-Reckoning was announced to release in August for the Xbox One, PS4, and PC. The remaster was released to some decent praise and the Switch version was announced from a Twitter post in January for a March 2021 release.

In the mystical world of the Faelands, Kingdoms of Amalur: Re-Reckoning follows the “The Fateless One” who dies, revived in the Well of Souls by Fomorous Hugues. There is a war tearing the world apart, known as the Crystal War between the Tuatha Deohn and all the mortal races. The intertwining stories and quests are full of depth, character, and more story. This is a classic tale of good vs. evil in a massive fantasy world. The Fateless One rocks the foundation of Fate by turning the tides of war against the Tuatha.

The well-pieced-together fantasy world of Amalur is full of lore and voice acting and a story that really feels like it should have become the next big Western RPG franchise. The game’s story may seem blasé’, however, the creative direction Salvatore took throughout Kingdoms of Amalur: Re-Reckoning will keep you hooked if you pay attention and are a fan of classic fantasy literature.

While this title is a remaster, it does show its age compared to the massively complicated stories of RPG’s today, however, I believe this game shows that it was ahead of its time by creating a great world that was fresh for its release time.

Western RPG’s tend to follow a formula. Create your character with a plethora of customization options, a variety of gameplay styles via weapon choices and types of characters to commit to like mages or warriors, and a basic hack and slash approach to combat that you can also focus on magic abilities if you feel so inclined.

You have the choice of the Almain, The Dokkalfar, Ljosalfar, and the Varani. The Almain are like the nobility, civilized human race. The Dokkalfar are the dark elves of the kingdom, the Ljosalfar are the opposite light elves and the Varani are the more nomadic, uncivilized type of humans. You have three classes to choose from with a skill tree with plenty of room to customize your journey as The Fateless One.

With a third-person perspective, I will say the camera work can be a little choppy and will affect your combat or aiming so try to adjust to how you want when you start. One thing that tends to bug me is choosing to be a warrior, but you can still do things like cast spells. I found using fire spells and others against the giant spiders, for example, melts the spiders versus using your giant sword for a few minutes while it attacks you. This game is full of options that can adhere to how you play, but there is still a pretty steady formula that is followed pretty strictly.

The combat features some quick-time button finishers like God of War and a “Reckoning Mode” which is an intense mode where time slows down but you do not and you can destroy your enemies with style. The “Reckoning” mode is built up with Fate points you earn as you fight throughout the game. Simply hacking and slashing is not the only way to achieve victory. You must be strategic and smart about how you use your potions, your skills, and magic. This is a great game for the task-heavy and planning type of RPG player.

Amalur is full of armor and weapons of various styles that you unlock through side quests and simply exploring the vast kingdom. There are some unlockable DLC and more content coming in the future to keep the kingdom alive.

When Kingdoms of Amalur: Re-Reckoning released, EA also released the DLC content from the original to accompany the game as well. The Teeth of Naros, The Legend of Dead Kel as well as weapons and armor bundles all add more content to the original game and keep things interesting for an almost 10-year-old remastered, underrated RPG gem.

The best part about this remastered Switch port is if you get to download the DLC, you can start your adventure with a really strong armory of weapons and armor that will give you some advantages early on. There will also be new DLC released at a later date called “Fatesworn.”  Details on this DLC are very scarce but there are trailers about this new adventure for Amalur.

Despite the legal issues plaguing the launch of this game back in 2012, the developers still brought in some powerhouse figures in fantasy literature and art. Ex Rare composer, Grant Kirkhope was brought on to score the music and the soundtrack is absolutely beautiful. Sometimes I’ll just let the opening screen sit still and listen to the music.

The world is full of great orchestral scores, decent voice acting, and combat sounds. The battle music is intense, but in the background enough that it is not overwhelming. The sound design is easily my favorite aspect of Kingdoms of Amalur: Re-Reckoning.

Where the sound succeeds, unfortunately, the visuals fall. This remaster really shows its age graphically. There are some smoother shades and edges, however, the overall graphic quality is not that much different from the bygone Xbox 360 era. On the dock, the Switch version is a little choppy, and the handheld version actually runs a little smoother, as is the usual case for some titles on the Switch.

Sometimes the camera work can be a little interesting too. I highly recommend you adjust the camera to your ability. You can adjust distance, sensitivity, auto-locking on your character, and field of view.

If you’re a fan of high-quality, photorealistic graphics, don’t expect much from Amalur. This is an older game, and even though it’s been remastered, it still looks and plays like an older game. That’s not to say it’s not a good title or a good addition to the Switch, just keep that in mind if you pick up this title.

Overall, when an older game is ported to the Switch, I still get excited. When I first played Kingdoms of Amalur, I loved every minute of it. It was one of the few games that were different that hooked me from the beginning, especially after immersing myself in the world of Skyrim. I was disappointed to learn of the legal issues and the shutdown of 38 Studios, but I still remember the experience and time I put into Amalur as a Western RPG fan.

When the remaster was announced, I was excited! I played it on my Xbox One and got even more excited for the Switch version. I can work on my character and do side quests while my wife watches Doctor Who. Yes, the game shows its age, yes it’s not as massive as many of the RPG’s of the games of today. What this game has is its ability to mold a brand new world and keep you interested throughout its playthrough. There’s even more DLC coming to keep this wonderful game alive!

If you haven’t played this game yet, it’s worth checking out and it’s fun to play on the go! Keep in mind it’s age and the “remaster” is not AS GRAPHICALLY overhauled as one would think, but it’s worth picking up!