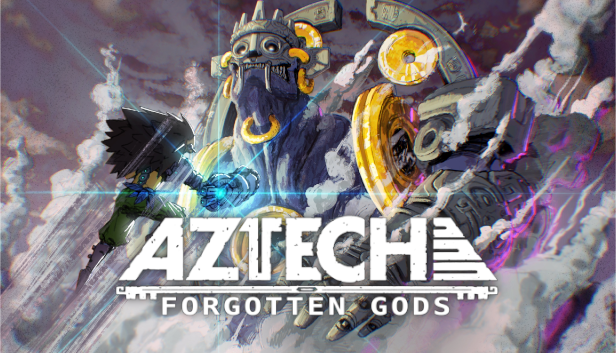 Chihuahua, Mexico — April 14, 2021 — Aztech Forgotten Gods, the Latinx-Futurism cyberstone colossus fighter from award-winning Mulaka developers Lienzo, debuted today at Nintendo’s latest Indie World. Aztech Forgotten Gods will launch on Nintendo Switch, Xbox One + Xbox Series X|S, PlayStation 4 + 5, and PC later this year.
In Aztech’s alternate history, European powers never arrived on the shores of ancient Mesoamerica. The Aztec Empire’s capital Tenochtitlan has thrived for centuries as a stone metropolis, technologically advanced yet heavily rooted in the ways of those indigenous to the land. Yet the gods of their past, like the feathered serpent deity Quetzalcoatl or Mictlantechutli, Lord of the Underworld, faded into distant memories. Until now.
Soon-to-be heroine Achtli joins her archeologist mother Nantsin on an unsanctioned dig. While searching for ancient knowledge that could help all of society, they inadvertently cause an explosion and awaken stone colossi hellbent on destroying the city. Achtli crawls out of the rubble to discover two new things: her prosthetic arm’s been replaced with a stone artifact, and there’s someone in her head named Tez claiming his own divinity.
Join the unlikely duo on their quest to crush colossi and discover why the gods disappeared so long ago. Battle massive bosses while wielding Achtli’s new gauntlet as a makeshift jetpack and devastating weapon all in one. Soar through the sky, run on walls, grind on rails, and bring the pantheon to their knees with stone-crushing strikes. Upgrade the gauntlet with Nantsin’s help to earn new abilities from plasma-based projectiles to energy shields.
Explore Tenochtitlan with Achtli’s incredible newfound agility and strength. Encounter optional side stories, unlock new outfits, and upgrade passive abilities by completing secondary challenges in the hub-world. Become the city’s savior with an adrenaline-fueled soundtrack that fuses metal with traditional Aztec instruments. Aztech Forgotten Gods’ emotional journey took inspiration from anime and superhero comics and has a vibrant, Saturday morning cartoon aesthetic to match.

“Lienzo’s proud to be fleshing out a Mexican story with a Mexican team,” said Guillermo Vizcaino, Head of PR and Marketing and Lead Writer. “There’s such a rich history behind the Aztecs, and merging that with an anime-inspired story gave us the chance to make something really special.”
Aztech Forgotten Gods will be available in English and Spanish on Nintendo Switch, Xbox One + Xbox Series X|S, PlayStation 4 + 5, and PC in 2021. For more information, please visit the official website and follow Lienzo on Twitter, Instagram, Facebook and join their Discord.
Press Release by Stride PR