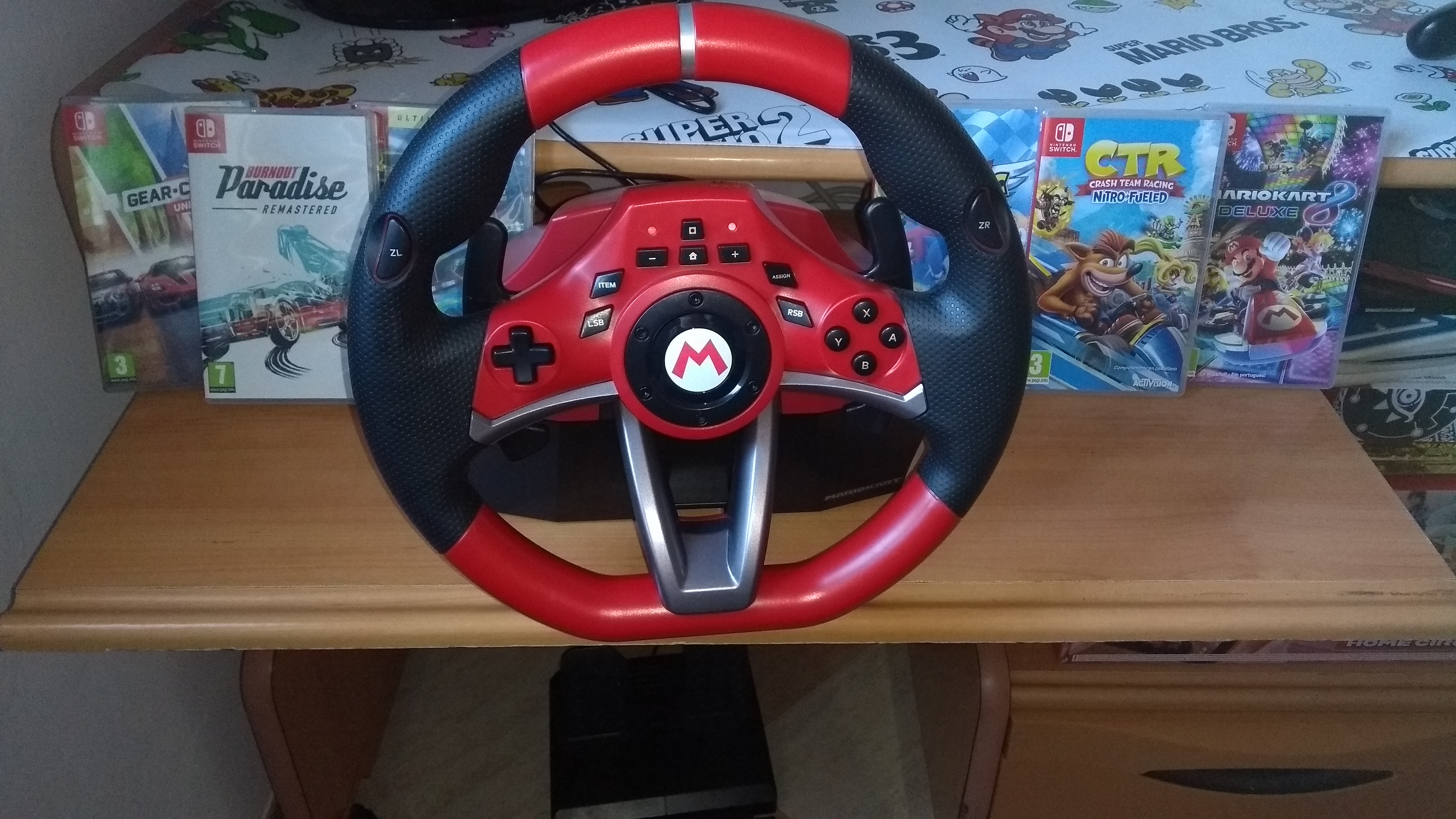 The Hori Mario Kart Racing Wheel Pro Deluxe is quite an incredible accessory for the Nintendo Switch. It gives you a more refined and authentic experience when playing driving games on the hybrid console. The combination of Wheel, paddles, and buttons means that you can essentially play any driving game with the accessory.

The wheel itself offers more control with steering than conventional joysticks and is ergonomically designed to be the size and form of the wheels used in racing cars. The foot paddles give you control over the A and B button that a number of games use for acceleration and braking.

Of course, not all games use the A or the B button for acceleration or braking. However, a lot of the buttons on the Wheel are reprogrammable so you can set it out to suit the racing game you are playing. It is worth pointing out that if you reprogram the buttons, you may have to reset them or reprogram them again if you play a different racing game.

That said, a number of racing games or car games have their own button mapping options so you may find it better to set up your preferred pre-sets in each game. Still, you have the option either way and it isn’t difficult to reprogram buttons on the Mario Kart Racing Wheel Pro Deluxe.

The wheel base has two methods of being secured so it doesn’t move about when playing. There are five suction cups that you can fix to the bottom of the wheel base and then push the apparatus down onto a flat surface to secure it. The other option is with the use of a clamp that is also included in the kit.

The suction cups are good for as long as they hold. If you are quite an aggressive driver in racing games, you may break the seal on the suction cups and dismount the wheel base from the surface it is stuck to. For a more secure fixture that is less likely to come loose, the clamp is a better bet.

So, what car/racing games can you play with the Mario Kart Racing Wheel Pro Deluxe? Well, pretty much most of them really. Obviously, Mario Kart 8 Deluxe is the main contender, and WRC 9 The Official Game benefits greatly from using the wheel. It also works with most karting games as well like CTR: Crash Team Racing and Team Sonic Racing. You may even be surprised to know that you can even use it to play Mario Kart Live: Home Circuit and you can also plug the Wheel into a PC to play driving games that you have on PC.

The Nintendo Switch games that we have tried and function with the Mario Kart Racing Wheel Pro Deluxe include (in alphabetical order):

Where to buy the Mario Kart Racing Wheel Pro Deluxe

You can find the Mario Kart Racing Wheel Pro Deluxe in most retail and online outlets that specialize in video games or have a department dedicated to them. The likes of Amazon, GAME, Gamestop, EB Games, Play-Asia, and I am sure there are many more, will likely have these in stock. The accessory actually released on the market towards the end of 2019 and I have been hesitating since about picking one up. Now that I have, I am already enjoying playing driving games a hell of a lot more now than I ever did.

If you are thinking of picking up the Mario Kart Racing Wheel Pro Deluxe accessory, you should know that it will set you back about $99.99 /€99.99. It is costly and there is a cheaper model, the Mario Kart Racing Wheel Pro Mini that is around $69.99/€69.99. As the name suggests, the MK Racing Wheel Pro mini is smaller in size and looks like a Fisher-Price toy alongside the Deluxe wheel. Still, they both have a lot of the same features but the deluxe version is aimed more towards adults and the mini is for children.

Thank you for reading this article. We hope you have found it informative and may help you decide on whether to purchase one for yourself or not. The links provided in this article are not affiliate links and are there only to serve as a reference. If you have your own Mario Kart Racing Wheel Pro Deluxe and know of other games that are compatible with the accessory, please let us know in the comments and we could add them to our list in the article and credited with your name!