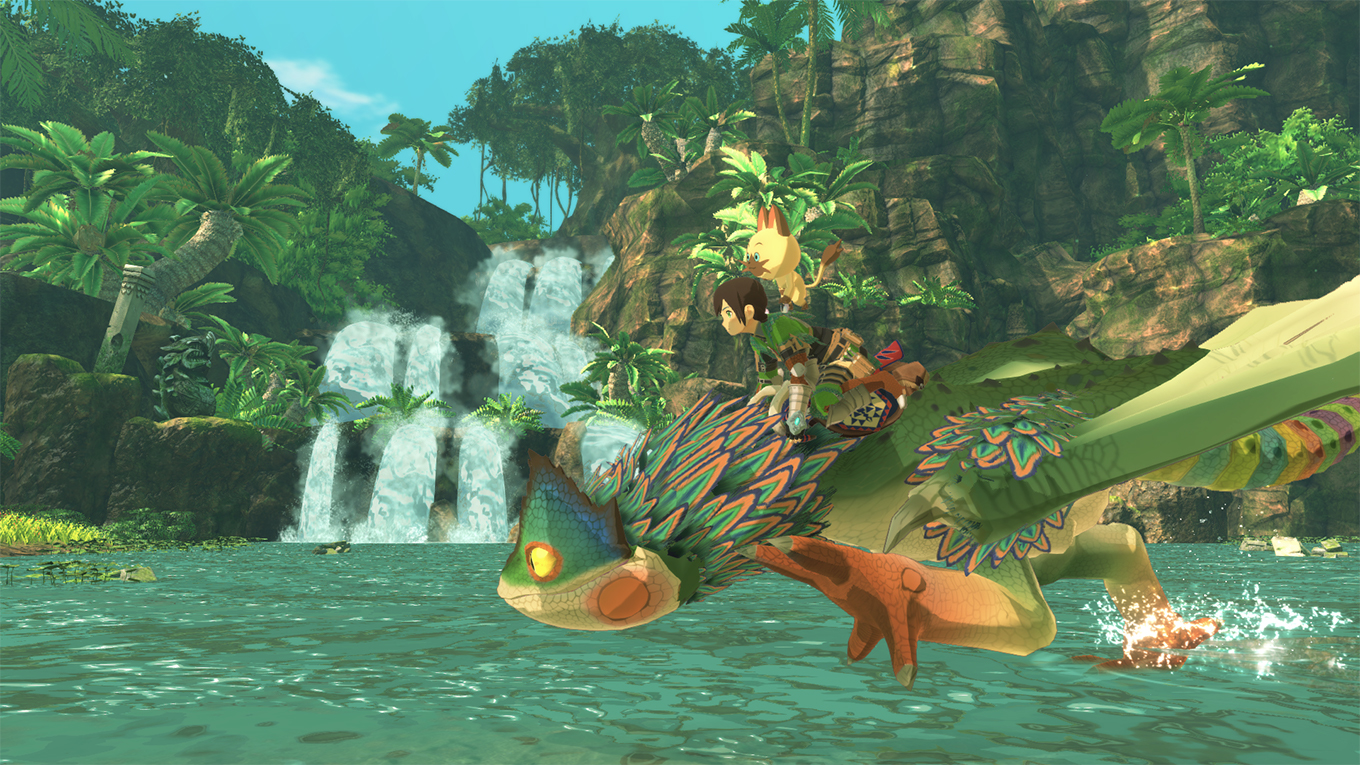 Just because there’s a few months to wait before the release of Monster Hunter Stories 2: Wings of Ruin, it doesn’t mean eager fans can’t learn about featured characters and we have that information right here:

You are a Rider who was born and raised in Mahana, a village on a tropical island. Your grandfather, Red, forged a bond with Guardian Ratha, the revered monster who protects the island. Upon meeting Ena, you decide to leave your home with her in order to learn more about your grandfather and to discover the cause of all the strange happenings recently.

You can customize your appearance! – Express your personality with a fully customizable appearance, from hairstyle to eye color and more!

A Wyverian girl who knew your grandfather, Red. Hoping to work together to uncover the truth behind recent environmental abnormalities, she entrusts you with a Rathalos egg supposedly containing a legendary monster fated to destroy the world. You embark on your journey together. She is honest about her feelings.

A globe-trotting Felyne with an unforgettable face. You meet each other as he is traveling around. He is adventurous and positive. His favorite pastime is eating, and he always has room in his stomach for another donut. He acts as your guide, determined to help you as you endeavor to become a Rider.

Your grandfather who passed away years ago. In order to discover the truth of the mysterious happenings, he devoted his life to traveling around the world with his Monstie, Guardian Ratha.

A Rider from Mahana Village. Her Monstie is a Velocidrome named Avmar. She is free-spirited and has a bubbly personality. She teaches you the fundamentals of being a Rider, and acts as your mentor as you set out on your journey.

A Wyverian Rider from Rutoh Village. His Monstie is a Legiana named Shaulk. He is handsome and seldom speaks. While he acts cold and reserved, he takes a shine to you because you are the grandchild of Red, the first human friend he ever had.

A young woman who serves as commander of the Royal Scriveners. She is stationed at the Scriveners Lodge in Lulucion, a Hunter’s city. While carrying out an investigation on the legendary Rathalos, she captures Ratha and takes him away from you. Despite understanding the way Riders think, she is now the commander of the Royal Scriveners, a position that requires her to put aside personal feelings. This causes a moral dilemma about the proper course of action regarding Razewing Ratha, the monster with the Wings of Ruin.

A highly skilled Hunter. He serves as Lilia’s right-hand man, working in tandem with her and the Royal Scriveners. Although he is a Hunter, he appreciates the way Riders form bonds of Kinship with monsters, and is happy to support you.

A young Hunter in pursuit of the legendary Rathalos. He distrusts the way Riders live alongside monsters, and he is determined to capture Ratha. Since you are protecting a monster with catastrophic power, he sees you as an enemy. He is straightforward and has a strong sense of justice. His Palico is Tsukino and his weapon of choice is a bow.

She is a Felyne who serves as Kyle’s Palico. In order to capture the legendary Rathalos, she follows you and the egg after your disappearance. In contrast to Kyle, she has a calm demeanor and speaks quietly. While she trusts and supports Kyle in his endeavors, she worries that there may be more to the situation with Razewing Ratha than meets the eye.

A group of Riders who conceal their identities. They order the forceful capture of Ratha and do all they can to hinder your progress. But what could their purpose be…?

A Rider from Kuan Village. Her Monstie is a Barioth named Frostfang. Having been through many trials and tribulations together, Avinia and Frostfang have formed an unbreakable bond of trust. She focuses her energy on rebuilding her village that was destroyed by the Black Blight.

He lives in the Felyne Shelter, along with other Felynes who had their village destroyed by an environmental abnormality. His catchphrase is “pawsitively clawdacious.”

A mysterious Wyverian who you meet high up in the snowy mountains. His favorite food is Hot Spring Dumplings, and he gets weak in the knees around attractive young women. Perhaps he knows the way to control a Monstie’s power…?

Got a favourite character yet? Let us know.