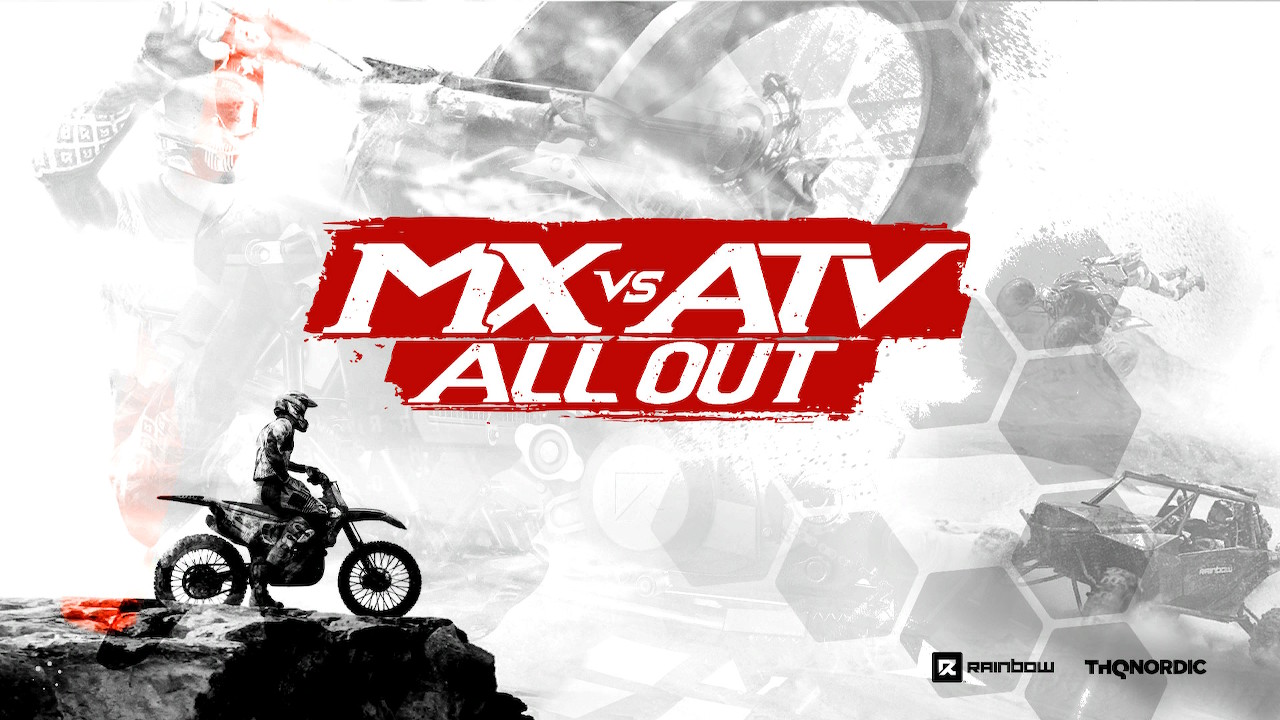 [Review] MX vs ATV All Out (Nintendo Switch)

The MX vs ATV series has seen its ups and downs (pun intended) throughout its lifespan. Starting back in 2005 on the PS2, Xbox and PC, The series has seen an installment on every console since then with MX vs ATV Unleashed, MX vs ATV Untamed in 2007, MX vs ATV Reflex in 2009, MX vs ATV Alive in 2011 on just the PS3 and Xbox 360, MX vs ATV Supercross on PS3, Xbox 360 and eventually ported to the PS4 and Xbox One and finally MX vs ATV All Out which launched in 2018 on the PS4 and Xbox One and was ported to the Nintendo Switch on September 1st, 2020, developed by Rainbow Studios and published by THQ Nordic.

The series was born by combining the MX Unleashed franchise with he ATV Offroad Fury series, born from the ashes of THQ as the company saw some reorganizing. The series survived the death of THQ before Nordic grabbed the franchise. This series is well known for high flying stunts, offroad vehicles, and motocross races. On a Nintendo system, it really shows how far we have come since the Excitebike days as offroad racing games have developed over the years.

With MX vs ATV All Out, there is no direct story. It’s an open world, offroad arcade racing game. The primary focus is competing in various racing modes, exploring the open world, completing some pretty ridiculous stunts in freestyle mode, and competing online and with friends in local and online multiplayer.

As you compete in various race series, you’ll earn money depending on when you finish, just like any other racing game where you have in-game currency. You’ll use this currency to upgrade your cosmetics, tune-up your bike, and purchase more gear throughout your career. There are quite a few well-known brands if you’re astute in the world of motocross and ATV racing, of which I am no expert.

When you begin, the game walks you through each tutorial of racing styles. This was helpful, however, while racing around in practice mode, the pop-up tips and hints and instructions were very distracting and I could not focus on the information given. You’re not competing against anyone but there is a timer of course and while it is tutorial mode, if you’re racing around you don’t want to read and drive…just like the law says against texting and driving. I was not a big fan of the tutorial and honestly, there is a lot to take in that newcomers need to ingest before jumping in and trying to tackle stunts and races.

MX vs ATV All Out is your standard racing game. Pull the trigger to give it the “Go Go” juice, press the left trigger to brake. When you crash, press a to restart quickly. The controls are very standard and easy to jump in and play. The challenge lies in the terrain and how you handle jumps and landings.

Any motocross game is going to replete with bumps, hills, leaps, and bounds. You have to read the area as you soar through the air and figure out the best way to land and keep your speed in certain modes. There are quite a few different areas when you start into the various series to compete in. All of them have their own personality. Some levels are a vast desert, others are a rocky terrain and some are a pleasant hilly mountainside valley. All of these levels have a lot of jumps and twists and turns that you must traverse in order to win.

In point to point mode, you race through 10 checkpoints that are placed randomly throughout each world. In the unforgiving vein of Mario Kart, do not get cocky and think you have it in the bag because the NPC racers will quickly steal your thunder!

In Series, there is an amateur offroad set of events, an amateur motocross set of events and indoor opencross set of events. There are also a few DLC packs that you can purchase for more experiences. As you level up, you unlock more challenging racing modes and more stunts and arenas to race in. You’ll have to get the game to really learn more! This racing title is quite full of experiences and replayability for the offroad racing fan!

In events mode, there are six modes. Supercross, ArenaCross, National, Opencross, Waypoint, Freestyle, and Freeride. Each mode has a plethora of levels to race in, as well as more add on DLC content. The online multiplayer is not the most intuitive. The wait times are too long and the gameplay is very choppy. However, there is one neat perk. When you enter online multiplayer mode, you can use the Nintendo Switch Online Smartphone App to communicate with other racers. I did not have a pleasant experience with the online multiplayer on the Switch and I hope they improve over time.

Some modes in multiplayer include the standard waypoint races and circuits. One fun mode is called TAG! It is literally tag, but with motocross bikes. This can actually be fun whenever a game loads….As I type this, I am still waiting on matchmaking to find a quick match and it’s been about ten minutes…

Overall the gameplay is smooth, albeit the graphics in the open world can be choppy. The casual racing fan will find the most challenges trying to navigate all the jumps and mounds in lieu of their standard flat tracks they are used to in the average racer. You should not play this game if you are not a fan of jumping hills and performing stunts all the time.

The Hometown MX Nationals pack includes a few tracks from around the world and a few day time variations to add some variety to your racing! And finally, Slash’s Snakepit includes three supercross tracks and a freestyle map that were all designed by the legendary guitarist Slash!

In the eShop, there is also an overwhelming amount of DLC vehicles for MX vs ATV All Out to purchase to add to your collection. All these vehicles are actual replications of real motocross bikes and ATV’s. I love it when real brands get used in racing games. This adds more realism to the experience, especially when you’re tuning your bike and you’re using real brands and real parts!

On top of DLC, you can use your in-game currency that you earn from races to upgrade your bike and customize your appearance to match your racing personality! This gives you some incentive to win and finish every race and earn as much money as possible.

Being the hard rock fan I am, I always gravitate towards the soundtracks of games like this and Need for Speed Underground or even Tony Hawks Pro Skater. The soundtrack for MX vs ATV All Out is no different as it is chock full of great metal, punk even some dubstep. Featuring artists like Asking Alexandria, Lettuce, Stick To Your Guns, The Offspring, and even My Chemical Romance, the soundtrack is one of the best for fans of rock and metal in a racing game.

The balance does seem to be off sometimes as the music is sometimes too faint in the background. You can adjust the balance in the menu, however, I still feel the overworld noise and the hum of the motocross bikes are too overbearing and cover up the music.

The overworld graphics in MX vs ATV All Out leave much to be desired. The frame rates drop pretty quickly but after you play for a bit, it smooths itself out. For some reason, the actual series races and events run smoother than the overworld driving. Freestyle can be a real mess too when you’re trying to control your driver and the performance gets choppy. I found that choppiness very frustrating at times.

The other fun part of motocross racing games is the crashes and seeing your driver ragdoll into oblivion. If you wreck into the wrong spot your driver will literally go flying into the sky…Not sure why it would be this extreme.

Handheld mode for MX vs ATV All Out is not very smooth either as you drive. I have found though that when you play a game like this on a tv with limited settings, it may perform better. Playing the Switch version on a big 4K display TV, the framerates can drop, whereas, playing this game on a smaller 22” HD Tv, the graphics performed a little better.

MX vs ATV All Out is a fun offroad racer, even with some issues. There is a huge variety of maps and levels to explore and experience and there are plenty of DLC vehicles to unlock as well as gear to unlock and upgrade.

The average racing fan may not enjoy how many hills and leaps there are, but for those who enjoy stunts, high flying, and performing tricks, this is the game for you. The challenge in the series racing is satisfying and the racing is quite addicting. If you can get past the long loading times and matchmaking, this is an experience that is worth your time.

All the positives can still be erased by the performance. Graphics don’t make the game. Performance matters more and this game fell short. The tutorial was not designed well and I still had questions on how to do some of the tricks they explained. Luckily, you can revisit any tutorial again and practice your skills. This game is focused on physics and racing and you must pay attention to how you land and where you land.

MX vs ATV All Out is a challenging, fun and sometimes frustrating open world, offroad arcade racing game. Anyone can pick it up, but it is not easy to master. This experience is enjoyable however, be prepared to be underwhelmed by some of it’s performance.