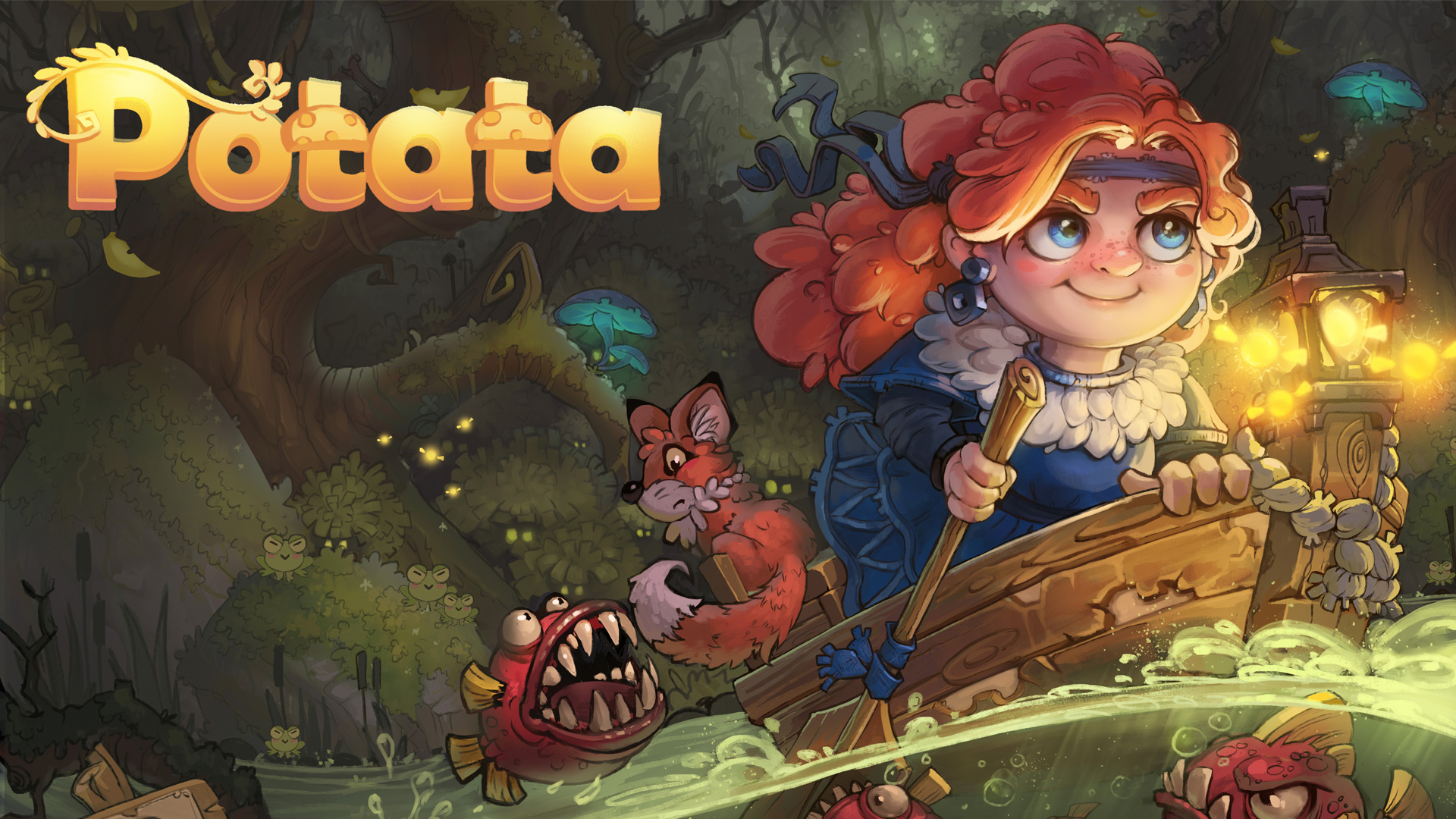 Potata: Fairy Flower was previously released on other consoles and platforms in 2019. The game received moderate praise as an entry level platforming game. Now released on the Nintendo Switch in June, 2020 it’s our time to jump in, and around, the platforming world to save the forest.

Potata’s journey starts off with her sick fox needing medicine only found in the fairy forest. While on her quest to retrieve the needed flower Potato angers a fairy which sends the petals of the healing remedy off into various levels which you will later need to find. Along the way you will jump and slash your way across platforms and through enemies towards the end bosses where you will receive an item or the petals needed to heal your pet.

In Potata: Fairy Flower, you progress level by level linearly from point A to point B. Along each section you will need to jump from ledge to ledge, climb, or use moving platforms to get higher. Occasionally the moving platforms are stalled and you will need to hit a switch to activate the moving mechanics of the platforms. There are flowers to leap from which shut once you step on them, and reopen a few seconds later. The basic maneuvering through the world requires either a series of short leaps or by holding down the jump button, longer stretches of air to get to where you need to go next.

At the end of the stages you will come across boss fights, sometimes taking other fairies, or possessed creatures that you need to fight. The fights aren’t always straight forward as to what you need to do, though most of the time they rely on precise hit boxes which can be difficult since movement isn’t always that fluid.

While going level to level you also encounter various puzzles that block your path in the form of light puzzles, pipe aligning puzzles, or fitting tetrominoes in a pattern on a wall. While none of these puzzles are difficult they are a bit obtuse at times. You can just click along to solve the puzzle using some trial and error. Or if you are a bit rushed on time or frustrated you can use a hint from the puzzle master by spending some of the coins you find along the way.

There are six petals to find to save your fox friends. But along with those six petals you will be tasked by the NPCs in the game to collect items for them as well. The story conversations progress with a lot of reading and making selections, though it never seemed like my selections equated to different endings or changes in the narrative.

Potato is equipped with a sword as well which helps in the combat, which is lean to say the least. Some enemies can only be killed if you jump over them and then hit them when their backs are turned. You will also come across blob-like enemies in a few areas that act like proximity bombs where getting close causes them to explode, though you have a short amount of time to back away from the damaging gas they emit.

Potato’s soundtrack is subtle and chill, as best as I can describe it. The music is almost soothing, aside from the boss battle music which tends to be a bit more intense. There are background sounds as well like hopping on grass platforms, falling stone blocks, or the croaks of frogs in the forest.

It would have been nice to have the NPCs voiced or at least have more variety in their presentation of voice. As of right now that area is severely lacking and in my opinion takes away from what could have helped in making those characters memorable.

Potata: Fairy Flower has a unique visual style, most reminiscent of 2D flash games. The backgrounds are colorful and give a sense of depth through their use of layering. The character animations of Potata do seem someone stilted as they lack fluidity. There were times too that I felt like some areas were hard to discern interactive foreground elements over background set pieces that would or would not hurt me.

The game performance is fine and I never noticed any clipping or stuttering of frames. There’s not a lot going on, though in Potato, so you’d hope that it wouldn’t suffer any issues like that. Load times aren’t long either between the main hub and the levels you will jump in and out of either.

Potata: Fairy Flower isn’t a long game, as long as you know how to complete the puzzles and manage to hit the boss head on. There are some frustrating moments however which could be amended with clearly discernible hitboxes on enemies. Potata is clearly a game aimed at younger audiences which is not a bad thing as it does ease you into the platforming mechanics and puzzle solving of other games in the genre. For a budget title it does a lot of things well.

The game is short and can be completed in close to three hours or less. The story is quirky, though not genre defying. There’s a lot to love about Potata, as far as graphics, audio subtly, and more. It’s just not one I would find myself drawn to over and over, but I would recommend for a younger gamer.