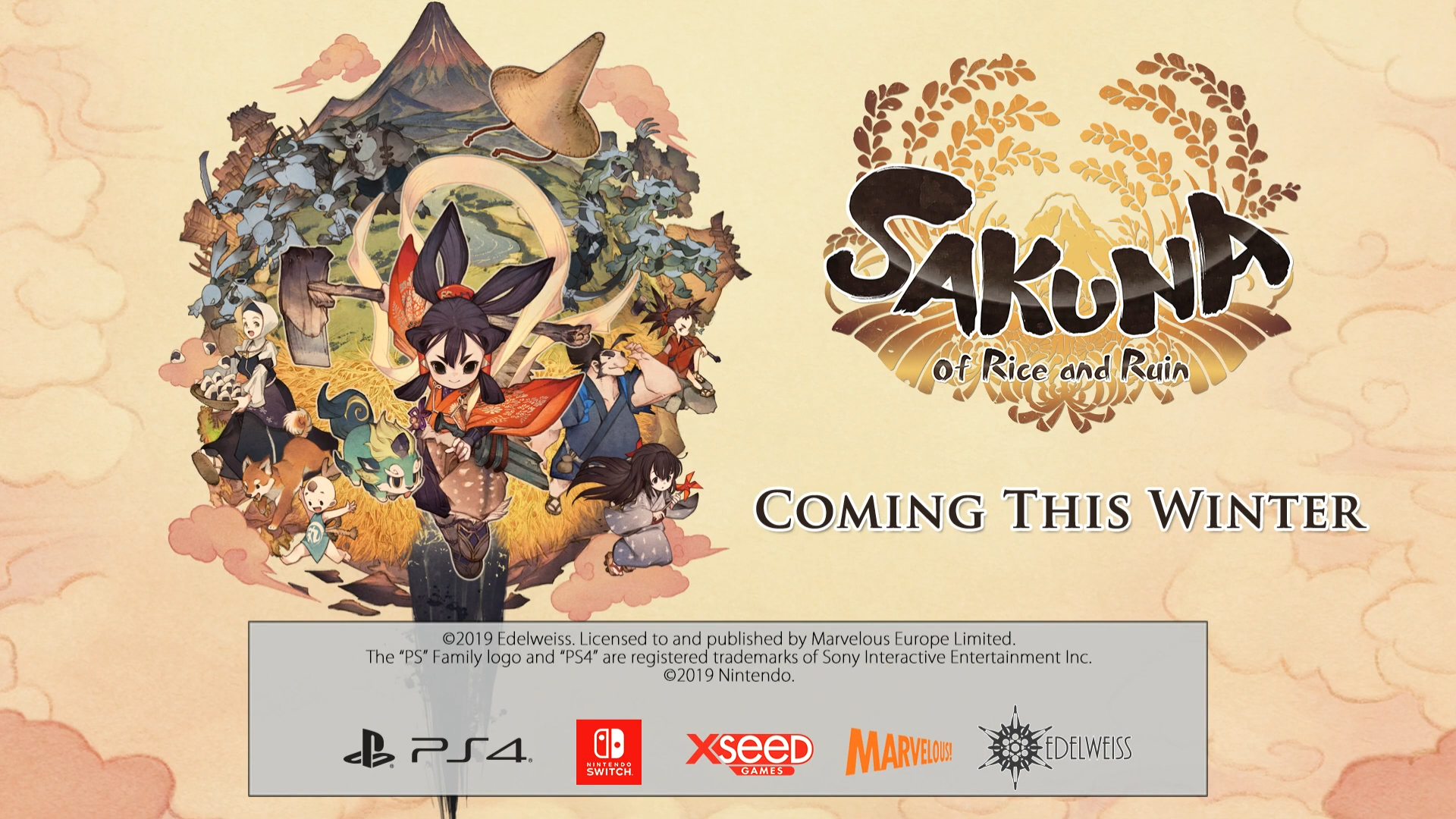 Sakuna: Of Rice and Ruin Releases On Switch This November

Marvelous has announced that Sakuna: Of Rice and Ruin now has a release date. The game will launch on Nintendo Switch and PS4 on November 20th, 2020. The game will be also be available to purchase physically in Europe and Australian in both standard and Limited Editions. The standard edition will be priced at £34.99/€39.99 and the Limited Edition will be priced at £49.99/€59.99.

You can find out more about Sakuna: Of Rice and Ruin in the official announcement below.

Sakuna: Of Rice and Ruin to Launch This November on Nintendo Switch™ and PlayStation®4

London, United Kingdom – 20th July 2020 – Marvelous Europe Limited are today excited to announce that the upcoming Action/Simulation game developed by the 2-man team at Edelweiss, Sakuna: Of Rice and Ruin, will launch physically and digitally within Europe and Australia on the 20th November 2020 for the Nintendo Switch and PlayStation 4.

In addition, Marvelous Europe Limited has also announced plans for a physical Limited Edition of Sakuna: Of Rice and Ruin for Nintendo Switch and PlayStation 4 that will be sold on the Marvelous Games Store and from selected retailers within Europe. This Limited Edition will have an SRP of £49.99 / €59.99 with contents and pre-order availability to be announced at a later date. A standard physical edition for Nintendo Switch and PlayStation 4 will also be available at selected retailers within Europe and Australia with an SRP of £34.99 / €39.99.

The brave heroine, Sakuna, charmed editors and gamers alike at E3 and left PAX fans wanting (and waiting) for confirmation of when they could join her on Hinoe Island. Developer Edelweiss has also been eagerly waiting for this moment, speaking for CG Artist Koichi and himself, Director Nal said:

“We’re elated to finally announce that Sakuna will be available worldwide in just a few months.

So much care has been put into bringing our vision for Sakuna and her world to life. Five years ago it was just the two of us with a dream, then character artist Ryota Murayama-san and composer Hiroyuki Oshima-san joined, and now, we’re in the home stretch thanks to our partners. We are counting down the days until we can introduce you to Sakuna, her friends, the joy and serenity of traditional rice cultivation, and all of the demons she’ll defeat with her farming tools.”

About Sakuna: Of Rice and Ruin:
Developed by Edelweiss, the two-man team behind acclaimed indie darling Astebreed, Sakuna: Of Rice and Ruin combines side-scrolling action with deep crafting and farming simulation. Players take on the role of Sakuna, a spoiled harvest goddess banished to a dangerous island with a group of outcast humans. As she explores the beautiful yet forbidding environments of the island, she will also find a home in a mountain village, proving herself worthy of her title by harvesting rice and bettering the lives of humanity.

Detailed 3D Simulation-style Gameplay: Learn the ancient art of agriculture by following detailed steps from planting to harvesting to cultivate the perfect crop. As a harvest goddess, Sakuna’s strength grows with each successful rice crop, with attributes such as aesthetic and flavour directly correlating to her combat abilities.

Creating a Home in the Wilderness: Sakuna’s mortal companions make weapons, armour, and meals for her using the materials and ingredients she gathers on her adventures, and completing quests for them will unlock even more options.

A Fresh Take on Japanese Mythology: The heroine is part of a pantheon of gods and demons inspired by traditional Japanese mythology but featuring many unique twists. The story and world are filled with lovingly rendered details, some familiar and some completely original.
Developed by Edelweiss and to be published by Marvelous Europe Limited for the Nintendo Switch and PlayStation 4 in Europe and Australia, Sakuna: Of Rice and Ruin will launch physically and digitally on 20th November 2020. Sakuna: Of Rice and Ruin will also be released digitally for Windows PC on STEAM via XSEED Games / Marvelous USA, Inc. on the 10th November 2020. The title has not yet been rated.