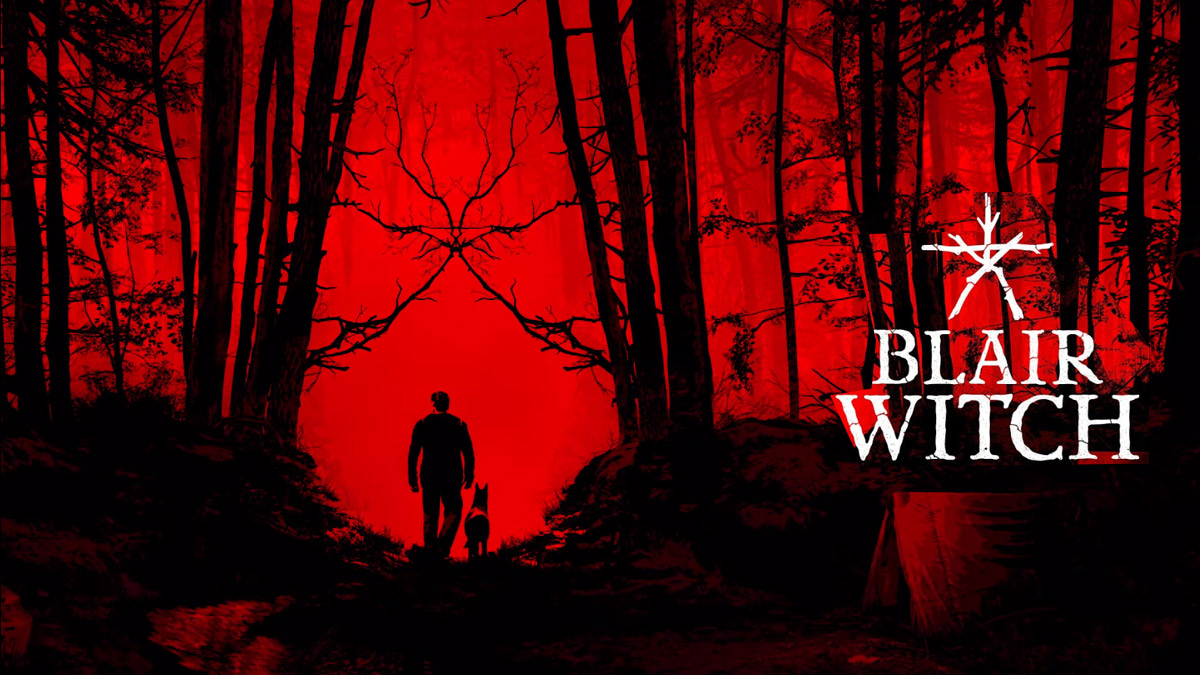 Released on August 30, 2019 for Xbox One and PC, Dec. 3 2019 for PS4, June 25, and 2020 for Nintendo Switch, Blair Witch is a first-person survival horror game set two years after the events of the original 1999 horror movie The Blair Witch Project. This title did receive mixed reviews from critics, but it is well-received overall. The game itself was first announced at E3 in 2019 and finally made its way to the Switch on June 25, 2020.

Upon its original release, Blair Witch launched on Xbox Game Pass. Bloober Team is known for its survival horror games such as Observer (you can find this title in the eShop) and Layers of Fear. The game was developed using Unreal Engine 4 and was intended to be a semi open-world horror game.

Blair Witch follows former police officer Ellis Lynch on the search for a missing boy, 9-year-old Peter Shannon, in Black Hills Forest. Ellis is haunted by his past and the tension of his current relationship constantly eats away at him. Ellis, accompanied by his dog Bullet, traverse a dark, gloomy, haunted forest in Burkittsville, Maryland to help the local authorities find the missing boy.

Throughout his journey, he is haunted by his PTSD from his past time in the armed forces. Flashbacks of his discussions with his wife and his experience in the army constantly eat away at his psyche throughout the story, and Bullet is his saving grace. To avoid spoilers, the story plays out just like a well-made horror movie all the way until it’s thrilling, mind-numbing climax.

Real details about the Blair Witch myth are heavily referenced throughout and is about such as the symbols, the Tappy East Creek area, video cassette evidence, all kinds of small details. The game really does the myth justice and caused me to want to watch both the movies and read more on the myth of The Blair Witch.

Blair Witch is a first-person survival horror game with some open-world exploration. Using Unreal Engine 4, you travel the forest and a few areas of interest as you investigate the missing boy, and yourself. You have a series of items at your disposal: A flashlight, a camcorder, a walkie-talkie, a cell phone, and a backpack for the items that you collect throughout your journey. You can customize your cellphone’s ringtone, theme, play some games, check emails, call your wife, and listen to voice mails.

The camcorder is the most important item in the game next to the flashlight. I really want to call this game the first legitimate “Found Footage” horror game. Throughout the game, you will find VHS Cassette tapes that you can watch on the camcorder that provide clues and evidence of what happened in the woods. The trick, however, is the red cassette tapes change your surroundings in real-time.

Say there’s a tree down in your path, watch a tape from that location and watch the tree fall, then rewind the tape and look up after rewinding and suddenly the tree is lifted. This game uses found footage to help you put pieces together throughout your journey. Blair Witch does an amazing job of making you feel isolated and stressed out just by throwing you in with hardly any info about what to do. Immersion is the key player in this game.

Bullet is your biggest ally and the best good boy in gaming. He will react to your surroundings and you must pay attention as he will alert you to the dangers around you. He will dig up items throughout the game that pertain to your journey and you can give him treats and pet him. There are other commands as well since your decisions will affect the outcome of the game. How you treat your dog will affect how your dog will react to you throughout the game.

If you lose Bullet, you will begin to lose your sanity. Some points in the game are inevitable and further the story. Stay close to Bullet and it may very well save your life! This sanity mechanic is akin to the old school GameCube title Eternal Darkness: Sanity’s Requiem which features a sanity meter that you lose as you encounter enemies.

At some points in the game, Bullet will help you fight off the evil in the woods. You must use your flashlight to fight them off as the light will always protect you. The camcorder can also see things you can’t see in real time at certain points in the game. To avoid spoilers, the camcorder is an incredibly important tool at the last portion of the game.

Following Bullet can be a little frustrating at times, but so can being lost in the woods with no guidance…The AI is a little better than some games that utilize an NPC to guide you through a game. Some NPC guides can be downright game-breaking. While glitchy at times, Bullet the Good Boy will never lead you astray. I recommend a bright-colored collar if you want to use your flashlight less for a more immersive, creepy experience.

I really enjoy the found footage mechanic. I honestly don’t think I’ve ever played a game like this. I’m sure there are some out there such as Manhunt or Outlast that are similar, but this game seems unique in my opinion in its delivery. If there are other found footage games out there, please let me know!

Blair Witch is all about the psychosis of Ellis. Your decisions affect everything in the game and based on that feature, I believe there are multiple outcomes (I did not get the happy ending in my first playthrough…). You will see notifications for cell phone messages, phone calls, walkie talkie calls, and it’s your decision whether or not to answer them.

They will allow you to see some insight into Ellis’s relationship with his wife, Jess, and his background in the police force as well as his history in the military. How you treat your dog, whether you give him treats, pet him, scold him (you better not scold him, or John Wick will hunt you down…) affects how your dog reacts to you on decisions.

There is only one DLC pack that came out In December of 2019 that launched with the PS4 version of the title, titled “The Good Boy Pack” that features customization options for your dog. This DLC pack also featured the cell phone customization items mentioned above.

This game has a very well scored soundtrack that makes you feel as if you are in a horror film. Blair Witch is best played in handheld mode with good headphones. I believe this is a quality title with some great voice acting that does not feel forced or overproduced. This game feels like I am playing through a movie, which to me is quite telling.

The voice acting is quite impressive, the recording quality is not bad, it feels like it peaks a little hot at times when things get loud (nitpicky musician here…) but the audio quality delivery overall is quite good. Once again, handheld mode with headphones is the way to go. Motion-based sounds in a dark creepy forest truly make for an unforgettable, horror experience.

The background noise is ominous, even the pause screen can be unsettling with the old school whirr of a paused VHS Tape (if you want a history on what a camcorder and VHS tape is kids, ask your parents…these are truly ancient artifacts nowadays…) The soundtrack is very immersive (a running theme throughout the whole title…)

The incessant tremolo cello notes during certain sequences (trying to avoid spoilers) on top of random pounding percussion strikes add so much tension and feelings of fear as you navigate certain sequences, especially if you’re far away from Bullet and you start to lose your sanity…

The atmosphere is overall pretty terrifying. The composer did a wonderful job scoring the sequences like an interactive horror movie soundtrack. Small details like sticks falling and thuds in the forest add even more unsettling ambient elements.

As stated earlier, Blair Witch is best played in handheld mode with headphones. The graphics are smoother on the smaller screen, but they struggle slightly in docked mode. They can be a little unresolved, or choppy in docked and at times it can appear glitchy. The cinematic graphics are decent, and overall, I believe it runs at 30 fps. If you’re a stickler for graphics, you may want to try other versions.

Personally, I believe a game is not successful on graphics alone. This game succeeds in its delivery, story, sound, and unique survival horror mechanics. There are times when visuals are striking, other times, they leave a little to be desired. The darkness of the game is also especially important. I played it with the brightness turned all the way up on handheld mode because I could still see my face on the screen because the game was so dark.

Visually, some places were almost too hard to see, not sure if it was a glitchy environment with all the flashing going on (ex. one area, you don’t have bullet, so your sanity starts to wane and the screen flashes off and on, makes it a little difficult to really play out what’s going on.) When in doubt, just move forward until something scares you (I feel like that is a general rule of thumb for most survival horror games…. just keep swimming…. just keep swimming….)

The features of the forest, Bullet, the environment is well made for a Switch port, but at times they were not as well developed as I feel they could have been on a stronger console. Another feature is the intensity of the HD rumble. At times, that rumble made me jump more than the jump scare itself!

Blair Witch is a very good survival horror game. I felt tense, uneasy, stressed, and challenged and, to me, that is a sign of a very good horror game that is all about immersion. If you play this on the TV, be prepared for subpar graphics, but I honestly think the game itself will distract you from the graphics.

This game really made me think about why we play games, especially with the impending Next-Gen console on the rise. If a game has a great story, decent mechanics, and a well put together environment that sometimes rewards your curiosity, you forget the graphics are not the best. Some of the best games in history have not-so-great graphics by today’s standards. I challenge you the reader to think about why you play games and give games like Blair Witch a try.

The story is well written, the soundtrack and horror sound effects are very well done and had my heart pumping! The game overall plays out like a slow burn horror movie with a thrilling, mind bending climax at the end!