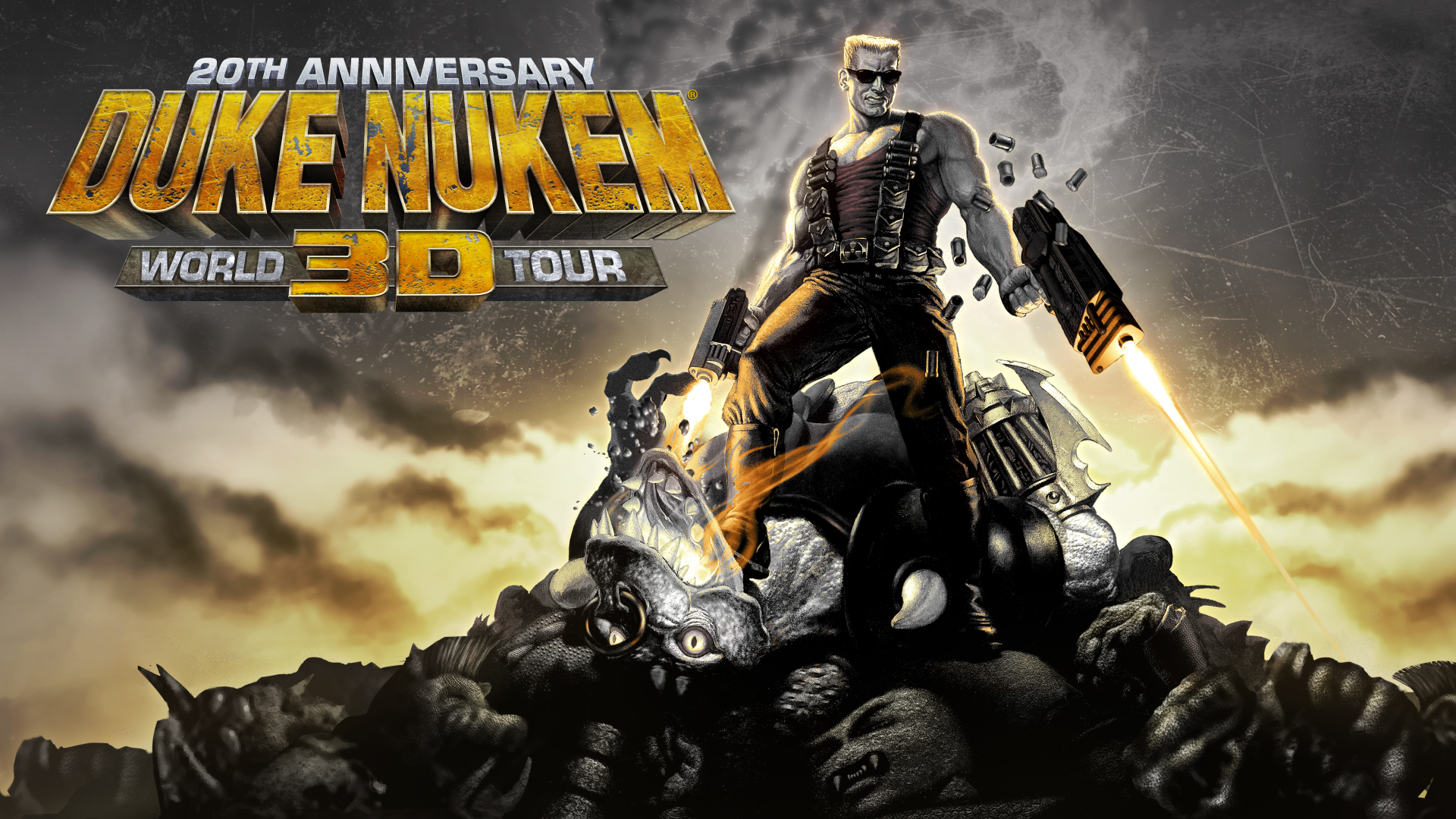 Initially released in 1996 and then making a debut on the Nintendo 64 the following year, Duke Nukem 3D: 20th Anniversary World Tour, back then simply known as Duke Nukem 3D, was developed on a budget around $300,000 USD, with a development team that was mostly made up of eight members, but nearer to the end of the development cycle, it had increased.

Since its original outing, Duke Nukem 3D, went on to release on multiple platforms, and receiving add-on content and campaigns and fast forward 20 years, Duke Nukem 3D would still be relevant, as it will get a deserved remaster, have even more new content added and when it comes to the Nintendo Switch port by SONKA, even more additions would be added. Oh yeah!

Taking place during the “early 21st century,” whilst set on Earth, Duke Nukem 3D: 20th Anniversary World Tour, picks up where Duke Nukem II left off. The memorable badass that is the man himself, Duke Nukem, has returned to earth, eager to have a vacation and instead, his space cruiser is shot down and he finds himself landing in Los Angeles.

With Duke’s vacation plans out the window and alien hostiles laying siege to the city, even going as far as mutating members of the LAPD, he’ll stop at nothing to stop the new invasion in Episode One: LA Meltdown.

Episode Four: The Birth first appeared as part of the Atomic Edition in 1996, and sees Duke having to return to destroy a brand new threat in the form of an Alien Queen and then in the even newer Episode Five: Alien World Order, let’s just say good old Duke has a full-scale invasion to stop and a new alien leader to put down.

As a first-person shooter, much like DOOM and Wolfenstein, Duke Nukem helped set the stage for what first-person games could be, and Duke Nukem 3D: 20th Anniversary World Tour, is no exception.

Sure, it might look a little dated, especially when playing with the original graphics on, but the actual gameplay is smooth like butter and when playing the game on harder difficulties, like Come Get Some will running enabled, oh what fun times there are to be had.

Being a shooter, majority of the gameplay does consist of players controlling Duke, navigating non-linear levels, where they must do battle against an alien threat, whilst taking advantage of the world around them.

If there is an area you don’t like the look of, there’s most likely a way around it, as the majority of the props in Duke Nukem 3D: 20th Anniversary World Tour, can be destroyed and there are plenty of secrets to discover, from secret spots to just different paths one can take to avoid a gunfight.

Among some of the weapons Duke can wield, other than his Mighty Foot, which is a basic melee attack in the form of a kick, there’s your standard pistol, a handy shotgun, an explosive RPG and a couple of other items that can soon turn the tide in battle, but when things are looking bleak, it’s time to use a medkit, or take some steroids.

Whatever the case, Duke isn’t going down without a fight easily and when the opportunity does present itself to wear body armour, do so proudly and lay on the hurt to all who wish to do you harm.

Other in-game items one can expect to find is scuba gear, which is put on automatically every time Duke descends into bodies of water. The air in your dive tanks won’t last forever, but it’s better to have the item than not to have it and spend a little too long in the water that Duke starts to drown. (Drowning in babes? Good! Drowning in water? Bad!)

In addition to five episodes for players to play through, Dukematch and online gameplay, Duke Nukem 3D: 20th Anniversary World Tour for Switch, comes packed with everything one would expect, but it also has plenty of new features as well.

For starters, I hope you like gyroscopic aiming support and motion controls because I absolutely loved using them and they certainly made aiming feel a lot more fun and there’s also the addition of HD Rumble.

Next up, the full campaign can actually be enjoyed on your own, or with up to 8 players playing simultaneously, thanks to either ad hoc multiplayer, or Nintendo Switch Online. So, should you wish to avoid the easy Piece of Cake difficulty, but need the help of your fellow Duke’s when eviscerating the alien menace, the option is there.

Should you wish to wage war against your fellow Dukes, however, say hello to Dukematch, a multiplayer mode that the Duke version of your classic Deathmatch and players are free to Duke it out to see just who is the biggest and best badass Duke of them all. Again, ad hoc multiplayer and Nintendo Switch Online are supported here as well.

Lastly, when it comes to new things, there is also a new weapon available in-game as well and it’s called the Incinerator. Sure, flamethrowers aren’t particularly all that new, but it’s still a great weapon to use and when you do come face to face against those harder to kill bosses, why not set them on fire? The “babes” are watching after all.

As for other content, there is the mature content that previously made the title popular for a lot of players, but it can be turned on and off in the options. As can the ability to run, displaying the crosshair, auto-aiming, your preferred HUD style and Playback Style.

For those of you who die often, the last one is a godsend as it will allow you to continue playing, long after you’ve died, just as long as you’re willing to go back to an earlier point in your playthrough and try again, instead of just having to start over completely from scratch.

Also, just for the sake of putting it out there, when it comes to the main campaign, you are free to jump right into whatever episode and level you want to, so how you experience this little world tour, it entirely up to you.

While I will not focus too much on the original soundtrack, since even to this day it is a classic and provides easy listening, when not interrupted by alien noises, weapons firing and squelching sounds, I will talk about the new stuff.

With new content at play, there’s also some new dialogue for our lovable Duke Nukem and it’s voiced by none other than Jon St. John, the original voice of the Duke and provided you have it enabled, there is a setting in-game where players, during Episode Five levels, can listen to developer commentary, which talks about the new content.

More importantly, is the fact that the Episode Five content is composed by Lee Jackson, aka the original composer. That’s right baby, just like how the story mode of Duke Nukem 3D likes to keep coming back full circle in Los Angeles, as does Duke Nukem 3D: 20th Anniversary World Tour.

Get ready to indulge in pure Duke Nukem goodness, as this 20th Anniversary World Tour, comes packed with the original graphics that, but there’s also a remaster 3D visuals at play, which offer “higher fidelity and framerate,” which can easily be toggled on and off, at the press of the down d-pad button.

The original style might look a little dated, and the remastered graphics might not be nearly as modern as some would have liked them to be, but they’re a nice feature to have and they didn’t make me enjoy the gameplay any less.

In fact, I probably enjoyed it all the more because of this aspect and the Episode 5 content, which is comprised of new levels not found in the original game, but designed by Allen Blum III and Richard “Levelord®” Gray, aka the original level designers of every level in the game and as for performance, it’s all smooth sailing, even when playing online.

As a game intended to celebrate the 20th anniversary of the Duke Nukem series, 20th Anniversary World Tour does Duke Nukem 3D justice. It offers the classic action diehard fans of the series, know and love, whilst offering an interesting gameplay experience to those who have never tried the series before.

Because of the nature of exploration in the levels, however, since there is no handholding to blatantly tell you where to go, players will instead need to rely on their wits and eagle eyes as they try to spot subtle clues that could lead them to new areas.

Not everyone might be able to appreciate this element of challenge to the game, as it’s something newer games have done away with, but if you take the time to relive a gaming classic such as this, fun boss battles await, along with the means of hitting a big button to nuke the enemy forces.

“Come get some!” I have waited a lifetime to be able to play this gem of a game and I wasn’t disappointed. It’s the classic Duke Nukem action we know and love, in both its original and remastered style, with unmissable additional content. It’s 90’s gaming at its finest and it doesn’t perform too sadly in 2020 either. “Hail to the King, baby!”