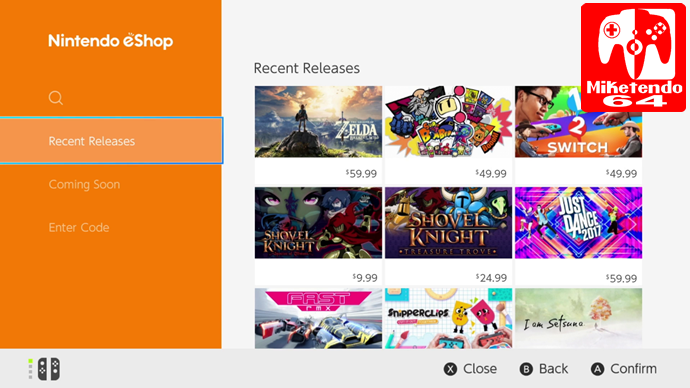 [Feature] Upcoming Switch Titles That Are Worth Looking Looking Forward To

So often, I find myself perusing the Switch eShop for the next title. The shop itself is full of great games and hidden gems. My favorite area is the “coming soon” section that lists all the games that have yet to be released. Here are a few that I am excited about and we hope you’ll check out too!

When I was a younger gamer, I gravitated towards more licensed games. I played a spongebob game on the GameCube. My family was obsessed with Goldeneye for the Nintendo 64 and I even played an Austin Powers game for the Game Boy Color…talk about a throwback. So you can imagine my excitement when THQ Nordic revealed they were reviving an old Spongebob classic. I never played the original but if it’s anything like the games I played in the past, it’s sure to be a splash hit!

This game has been around since the days of the Xbox 360 and it is easily one of my favorite dark puzzle games. It has mature content, so parents be warned this is NOT for your children. The story follows mild mannered Vincent on his personal journey of an unwanted love triangle between himself, his fiance’ Katherine and another girl named Catherine. This new version also features a new character named Rin who just adds to his stress level. This title features essentially two modes. A fast paced, wall climbing puzzle game and a conversation piece where you interact and drink with Vincent’s friends. It is a very interesting game and I can’t wait to see how it performs on the Switch!

Deadly Premonition 2: A Blessing in Disguise

Described as “The True sequel to Deadly Premonition” this title follows the cult classic “Deadly Premonition” as a new entry in the series. Deadly Premonition was a survival horror game from Ignition Entertainment that seemed to have a cult following and supposedly had a Guiness World Record for being the most polarizing video game in history. The original is also available on the Switch.

The sequels story follows FBI Agent York as he encounters a mysterious serial murder case in a small town in New Orleans. This title is also produced by the original creative team. I haven’t played the first but I am interested in this series and would love to see how this all plays out!

While this game does not have a set release date, I am still just as excited for this Adult Swim Games title. Featuring the original voice actors, this game is going to be an action platformer and from the teases and videos we’ve seen the graphics look like they will be stunning! The story itself is supposed to into the series finale so some of you may want to rewatch the series and familiarize yourself with the show. Samurai Jack is one of the most unique cartoon series ever made and I am excited for this game to come out!

From GUNGHO ONLINE, Ninjala looks like a great combination of Splatoon, Fortnite and ninjas. The eshop has some great gameplay videos of their battle royale mode among other features. This game looks like an absolute blast and it drops soon! You can customize your character in a variety of ways and there is cooperative play with 4 on 4 team battle. Could this be the next big online multiplayer for the Switch?

Paper Mario and the Origami King

Randomly announced online, Paper Mario and the Origami King has taken the internet by storm by being the next major Nintendo title to come to the Switch. Check out our piece on gameplay and other details here. Since announcing this title, Nintendo has been radio silent on any other major titles so this game is something we can all look forward to as the Paper Mario franchise is a much beloved series.

These are only just a few titles that we are excited about and cannot wait to get our hands on! It’s a great time to be a gamer!

Thank you for taking the time to check out my 6 anticipated titles!