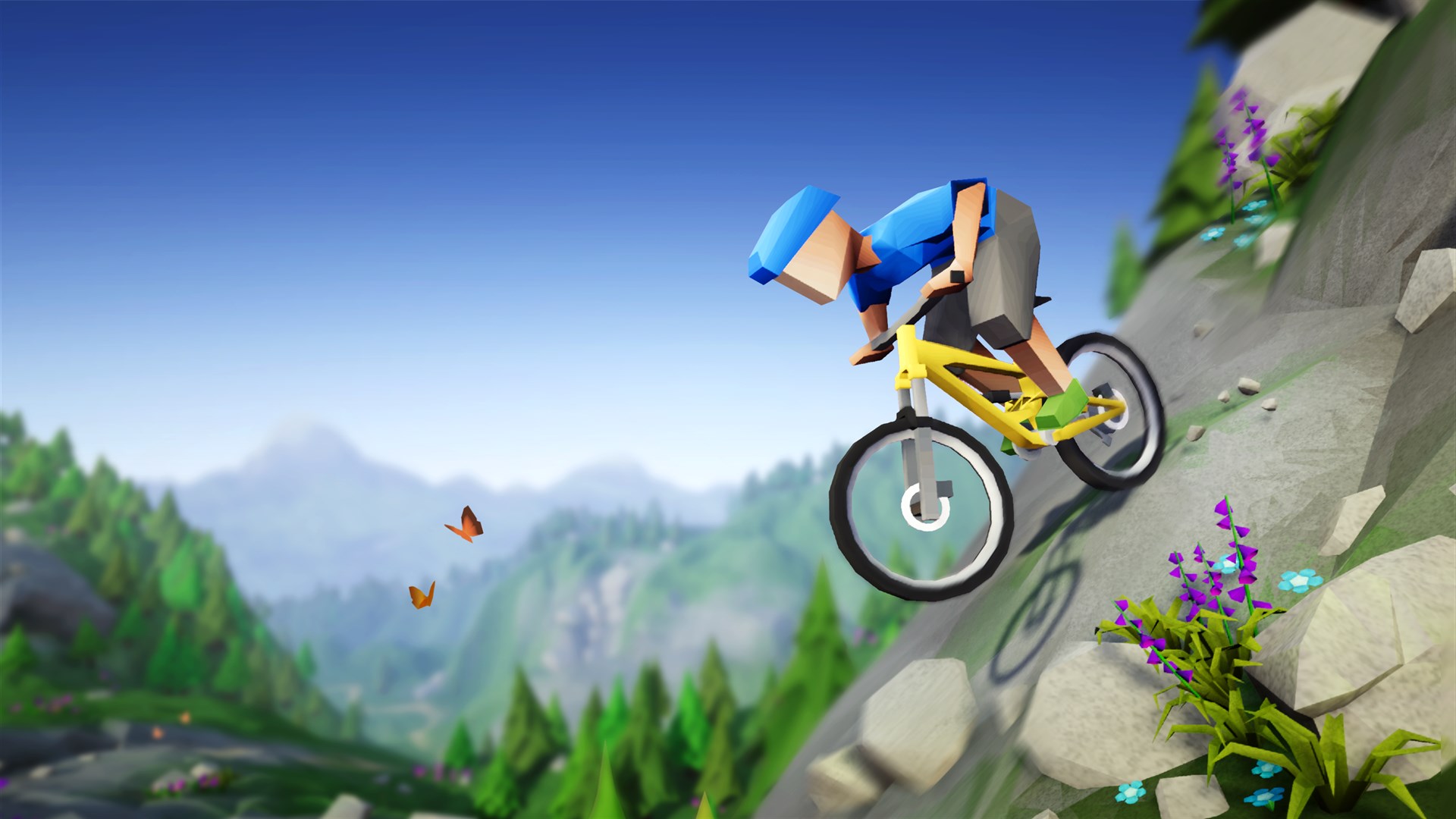 There isn’t a story to Lonely Mountains: Downhill, just an objective. Go down the mountain. You play as a nameless avatar with the goal of riding from the peak of the mountain to the campsite waiting below. The absence of a narrative works in the game’s favor however, as your one and only mission is made clear from the very start.

Your objective is to go from point A to point B. You play as a faceless rider that can be customized to your liking and choose one of six unlockable bikes to help you traverse the natural terrains.

You can traverse the mountain by the traditional dirt path or take one of many shortcuts. These are usually hard to navigate through, challenging both reaction time and the players’ control over the bike. Alternatively, you can make your own shortcuts (my favorite method of timesaving) by jumping off cliffs in unintended ways and landing in just the right angle. Tricky to pull off but if done correctly, you can save a whole lot of time.

There’s no limitations or rules as to how you’re supposed to play the game. If you want a relaxing experience, you can journey as slow as you wish. Or what I personally prefer, hold down the accelerate trigger and hope for the best as you recklessly hit top speed while avoiding trees and rocks, in an effort to reach the end as fast as possible. You can play however you want which makes for a fantastic experience overall.

One of the reasons why the game plays great is thanks to its tight yet accessible controls. “ZR” to accelerate, “ZL” to brake, “A” to boost and “B” to reset to the last checkpoint. Simple, yet mastering the techniques each command has is quite complex. Just like in Mario Kart’s 200cc mode, you can’t simply win by going forward at top speed. You need to work in conjunction with the brakes to cut tight corners and the mushrooms to boost in the right places. The same applies here, good handling with the controls means you’ll get to the end a lot faster and have a much smoother run.

The physics system is top-notch. To put it simply, it really makes you feel like you’re riding a bicycle. The bike reacts accordingly with the terrain, to the speed and force being used, you go slower when going up an incline, you float if you fall into the water, and so on and so forth. It gives a sense of realism, so it’s hard to get mad at the game when you crash. When you hit something and have to restart, you can only blame yourself. It’s never the game’s fault.

If you crash and “faint”, you’ll restart from the beginning area or your most recent checkpoint. Respawning is instant, which is fantastic as it gets players right back into the action. The level layout is superb. Every part of the mountain feels organic, but at the same time felt like it was meticulously made for multiple playthroughs. Replaying a track would almost always lead to me finding a new route, sometimes an even faster path than the one I took the previous run. Every trail was distinct and I loved going through them, from beginning to end.

There are four mountains, each one is distinct from one another thanks to its varied terrain and setting. For example, Redmoor Peaks is full of vibrant red trees and waterfalls, while Sierra Vista is a dirt-filled canyon with a lot of cactuses and rough terrain.

Each mountain has four trails with different paths and they all connect to the same end goal. Although it’s rare to find, some trails cross with one another. It’s really tricky to pass from one level to another, but with enough dedication, it’s definitely possible (if you want to give it a try, attempt going from Track 4 to Track 1 in Graterhorn).

Trails divide into four-level categories: Explorer (cross the finish line, with checkpoints), Beginner, Expert and Free Rider (cross the finish line, no checkpoints). In Beginner and Expert, there are two types of challenges. They’re either complete in “‘x’ time or less” or “‘x’ crashes or fewer”. You can do multiple challenges at once, though some are locked until you obtain a certain bike. The rewards for completing these challenges are bike paint jobs, rider outfits, or bike parts.

On top of all that, each mountain has four secret resting places. These locations require players to go off the beaten path to find them. They’re optional to find but incentivize exploration, which is a refresher from the normal gameplay. Finding one triggers a “cutscene” of sorts that shows just how beautiful the game is.

Although I don’t want to spoil much on this final topic, there’s sort of an unlockable “New Game +” that changes up the gameplay just enough to make levels refreshing to play again. So to sum it all up, there’s four mountains, four trails, each with around 31 to 32 challenges in total. Plus, four resting places and an alternate version to each mountain.

As for customization, it splits into a bike and rider. There are six bikes in total, you unlock five of them with bike parts. Every bike is different due to the different stats and attributes they each have. For example, the Grasshopper has overall balanced stats and is great for starters, meanwhile, the Javelin has insane speed stats but comes at the cost of terrible suspension. Then there’s my personal favorite, the Geronimo, which loses speed in exchange for some fantastic durability, great for off-road and tanking huge drops (if you’re like me who loves to go through unconventional routes, this bike is a must-have). As for the rider, you can customize its outfit, hair, helmet, facial hair, etc.

There is a “Progression” tab that contains the Overview (% of completion), Achievements (47 in total, they’re divided into 7 categories) and Statistics (total play time, no. of attempts, favorite mountain, etc). I was surprised at how detailed these categories are, as the game registers pretty much everything you do.

Finally, there’s the Leaderboard. Here you can find a worldwide online ranking of every players’ best times on each trail. There’s different filters, so you can search for specific trail times or your friends’ times. I will quickly mention the Options as well. They consist of toggle options to display blood, turn off screen shake, change measurement units, adjust volume, language, and steering mode.

There’s no music, just the sounds of the chains on your bike and the natural environment. Sound design is fantastic, you can listen to the birds chirping, the wind blowing, the wheels of your bike traversing the different terrain, just to name a few.

The absence of any music works in the game’s favor as it immerses the player into this fictional world. It also allows them to focus solely on the gameplay and the natural environment.

The esthetic mostly maintains itself with a low-poly style, it sort of has an N64 feel to it. The lighting, water, and dirt effects, however, are up to date and look absolutely outstanding. The color pallet is vibrant and makes everything in the environment pop out. For a game with low-poly visuals, it still manages to be one of the most beautiful indie games I’ve ever seen. There’s a certain beauty with how the visual design is created that makes the game stunning to look at, especially in the secret resting places’ “cutscenes”.

Performance-wise, it generally runs smoothly with a few hiccups in frame rate from time to time. It isn’t bad enough to ruin the overall experience, but it’s noticeable nonetheless. My other issue is the depth of field which is pretty bad. Anything in the distance is covered in this dense blurry mist. Although it isn’t game-breaking by any means, it obstructs a lot of the beautiful scenarios and environments.

I wanted to experience as much of the game as I could before reviewing. I did all 16 tracks, got all resting places, got 5 out of the 6 bikes and completed around half of all the challenges. This brought me to an approximate ten hours of gameplay, and I’m only around 65% done. Which leads me to believe 100% will take roughly 18 to 20 hours total, give or take. I’m really happy with how much content there is and the gameplay never got repetitive.

The physics, controls, sound design, and visuals inherently make the overall experience very relaxing to play, in spite of it being a challenging game where you’ll constantly have to restart the run. Even though you’ll respawn to the checkpoints quite a lot, it never becomes infuriating. The ambiance and world-building is so great, I never got mad while playing.

My only other issue aside from performance hiccups is the camera, which sometimes places itself in front of a tree or a cliff, which ends up blocking my view. It’s only ever a problem when I’m in a tight spot or doing a tricky maneuver, as I need to look at where I’m at and where I’m headed. Fortunately, it isn’t a huge issue as it only ever happens on occasions.

Lonely Mountains: Downhill is one of the best indie experiences on the Switch thus far. The gameplay is both addictive and challenging, and there’s more than enough content for your money’s worth. I loved every second playing it!