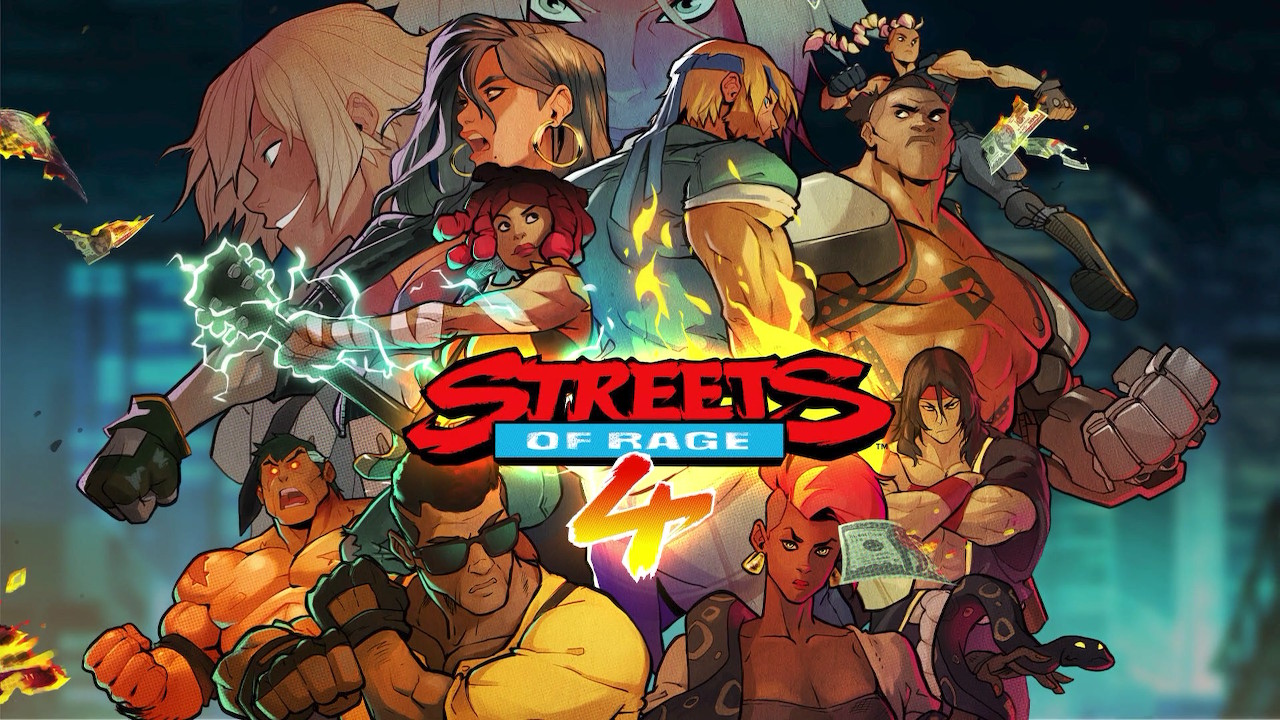 The Streets Of Rage franchise was a series of side-scrolling beat ’em up games that released on the SEGA Mega Drive/Genesis, SEGA Master System, and SEGA Game Gear back in the early ’90s. Three titles released on the platform during 1991 -1994. The Streets of Rage trilogy has seen a number of rereleases over the years but not a new entry until now in 2020.

Upon the success of the Wonder Boy: The Dragon’s Trap remake in 2017, Video game publisher Dotemu and video game developer Lizardcube reached out to SEGA for the chance to work on the Streets Of Rage series. SEGA gave them the license for the Streets of Rage franchise and they set out to develop Streets Of Rage 4 for PC and consoles.

The story of Streets Of Rage 4 takes place ten years after the events of Streets of Rage 3. Mr. X has finally been defeated and peace has returned to Wood Oak City. However, the peace didn’t last long as Mr. X children, the Y Twins, have taken it upon themselves to continue their father’s legacy and built up a criminal syndicate of their own.

The Y Twins plot to wreak havoc and corruption throughout Wood Oak City by brainwashing the citizens using hypnotic music. Blaze Fielding learns of this dark plot and calls up her old friends to help her stop this plot. Answering the call are Axel Stone, Adam Hunter, Cherry Hunter (Adam’s daughter), and Floyd Araia. The five heroes set off and take the fight to the streets, police station, sewers, art gallery, up to the Y Twins themselves.

Streets Of Rage 4 is a 2D side-scrolling arcade beat ‘em up, following in the same vein as the other games in the series. Players must venture from one side of the screen to the other, beating up every enemy that gets in their way. The stages, heroes, enemies, and items are in 2D but all characters can move up, down, and diagonally on the screen as well as left and right. As you move across the screen, it will stop scrolling at certain intervals, and enemies will step on to the screen. After beating them all up, the screen will be able to scroll again along with an arrow and the words ‘GO’ appearing and pointing in the direction you need to travel.

There are two buttons to attack. The Y button is for standard attacks and the X button is a special attack that does more damage but at the cost to your own health. If you can successfully follow-up with a series of standard attacks, you can recuperate some of the health in the green part of the health bar. This is a special third attack that can only be used after collecting stars. These star moves are a single-use move that can wipe out simple enemies surrounding you in a single hit. You can pick up stars around each stage hidden in barrels or objects. For the full list of moves, you can check out Fighting Tips on the main menu.

You can string together a combo by continuously hitting enemies or objects without being hit yourself. The combo will break if you are hit. When this happens, you will receive points based on the count of your combo. The higher the combo, the better the score. At the end of each stage, your score is registered and added to the online Leaderboards. It also gets added to your Lifetime score that upon reaching certain milestones, will reward you with extra characters in 16-bit form.

There are 12 stages to fight your way through in Story Mode with a choice of three difficulties; Easy, Normal, and Hard). 1-4 people can play together locally or 2 people can play together online. Every stage has a particular environment like on the streets, in a police station, onboard a ship, on the rooftops of buildings, etc and has a boss waiting at the end of it. Hazards can be found throughout each stage in the form of gas vents, poison puddles, and pitfalls and can do damage to both you and your enemies so be sure to avoid them and use them to your advantage.

Hidden inside some objects, disposable weapons, cash, and food can be found. Cash comes in forms of money bags and suitcases with bills that can add more points to your score. Food can help restore your part or all of your health. Disposable weapons like knives, iron pipes, swords, and Tasers have limited use before they break and can damage foes greatly. Some enemies can also possess weapons themselves and will drop them upon being defeated.

There are several different enemy types that each have their own fighting technique and style. It is important to take out large groups as quickly and efficiently as possible as they can easily overwhelm you and reduce your health to nothing in minutes. As there is no block button, there is no means to defend yourself except for using the special attack (without direction input) to clear a space around you. Should you lose all your health, you will lose a life and if you lose all of your lives, it is game over. If you get a game over in Story Mode, you can retry with an assist of extra lives and/or star moves at the cost of a reduced score.

There are other game modes apart from Story Mode. They include Arcade, Stage Select, and Boss Rush. You can’t access them until you beat the story mode at least once. Arcade Mode gives the player a single chance to play all the way through the story without losing all their lives. Boss Rush mode is as you would expect. You have to fight all the bosses, one after the other. Stage Select will allow you to replay any level you have already played on the difficulty you have beaten it on.

For those looking for a more retro experience, they can change up the music between the Streets Of Rage 4 soundtrack or the OST from the trilogy. The visuals can also be changed from modern graphics to 16-bit to further make the game feel even more authentic.

Some extra features that require you to beat certain stages in Story Mode include a gallery of artwork on heroes, enemies, environments, and more as well Character info on many of the characters in the series. An even harder difficulty mode (Mania Difficulty) can also be unlocked for those who really want a challenge.

As mentioned before about two people playing together online, one person can invite friends or random players to join them. Those hosting the game has control over choosing the stage, difficulty, and game mode. To play with someone hosting a game, you can select the Join Online Games option on the main menu.

While most game modes are strictly co-operative play, Battle Mode allows 2-4 players to fight against each other in free-for-all or team matches locally, or 2 people can fight each other online. There are eight stages to choose from and a random option to have the game choose a stage for you. Each stage is a singular screen as opposed to the full stages in the other game modes but still can still be traversed in multiple directions. The winner of the battle, of course, is the last person or team standing.

Streets Of Rage 4 has an incredible music track that is inspired by the 90’s night club- themed OST of the first three games. Olivier Deriviere composed the main soundtrack along with additional guest composers who composed music for the boss fights. The music is very upbeat and energetic and does well to pay homage to the original games. Of course, like I mentioned earlier when talking about content and features, the original OST from Streets Of Rage I and II can also be chosen and sounds just as good as it did in the 90’s.

The sound effects also have that nostalgic arcade feel from punching enemies to picking up items. The item pickup sounds, in particular, has a very familiar tone to it that many folks would recognize from the likes of Pac-Man games. This is, of course, a very common sound in retro video games but very recognizable nonetheless.

Just like in their previous work on Wonder Boy: The Dragon’s Trap, Dotemu, and Lizardcube has given Streets Of Rage 4 an HD overhaul with beautifully hand-drawn graphics. The game looks stunning and puts the original games to shame, though to be fair, graphic design in the early ’90s were limited to what they could with the hardware at the time.

Streets of Rage 4 performs very well on Nintendo Switch. It runs smoothly and there is almost no noticeable lag anywhere, even when there are scores of enemies on the screen.  Playing online, however, is a different story. There were instances where the lag was so bad that instead of 30-50 fps, we were getting 1 fps and we had to abandon the session. When it was going good, it was great but for a game that you wouldn’t think is “graphically demanding” you wouldn’t think that an average internet connection would have such effect online performance.

Streets Of Rage 4 is a tough but fun game. The gameplay is not too long but there is enough to come back to time and again in order to unlock more characters or obtain a better high score. It has all the classic tropes that made the original games so fun and the visuals are stunning. The option to choose between visual styles; both new and retro (as well as the music), is sure to be a welcome option for those that highly enjoyed the original titles.

Though I am glad that we have so many choices to play different characters in their classic skins, it would have been nice to have the option to play some of the other characters in more modern skins. The likes of Max Thunder and Dr. Gilbert Zan are only available in their classic skins as playable characters but Max Thunder is a boss this game so it seems odd that his modern skin isn’t unlockable. Perhaps there are some more characters on the way in the form of DLC? I suppose we will find out soon enough.

Streets Of Rage 4 is a joy to play with friends with gameplay that is simple yet complex. Above all, it can be quite addictive. Dotemu, Lizardcube, and Guard Crush Games have done a superb job bringing this old school classic into the 21st century.