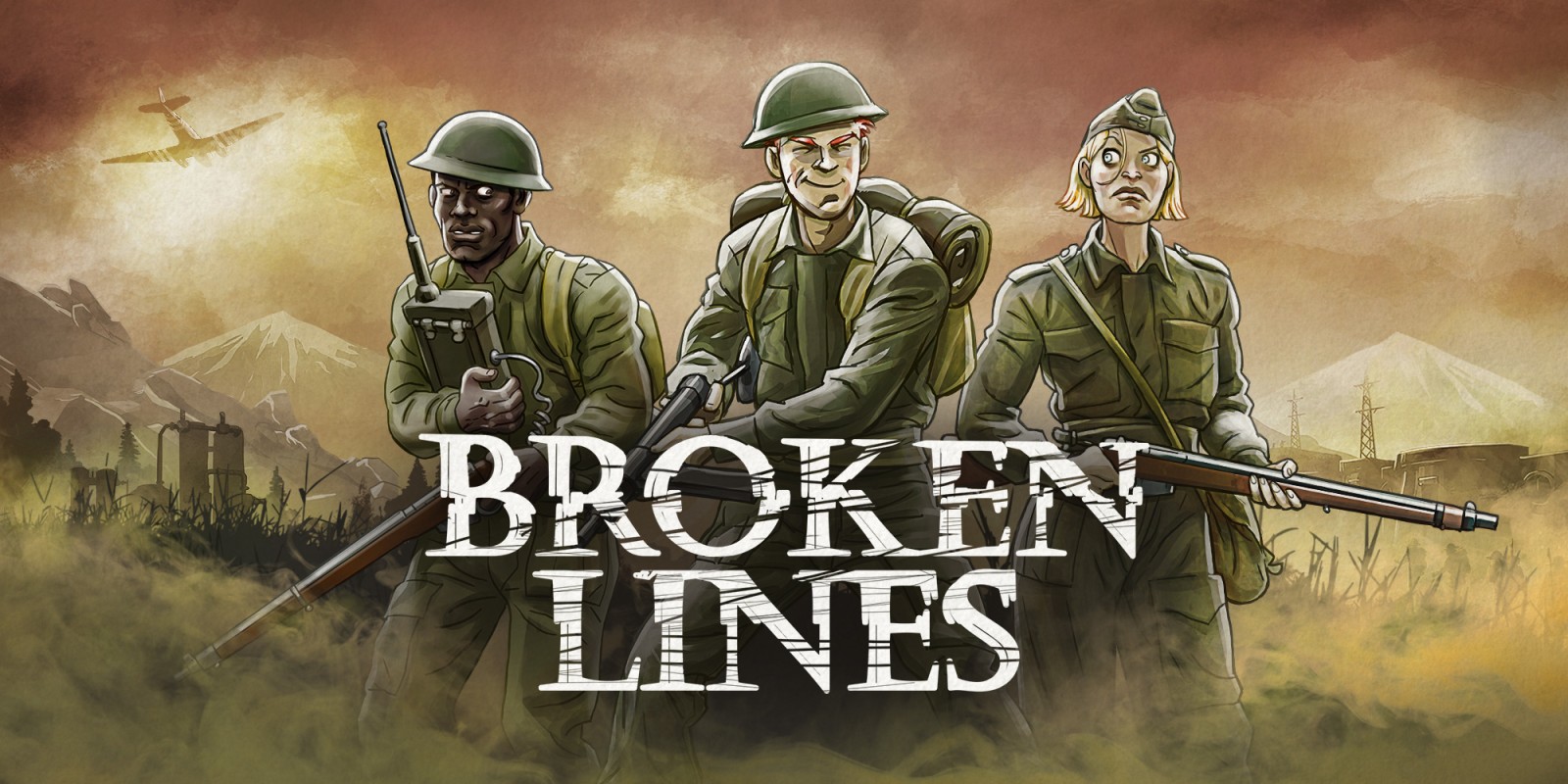 Broken Lines was developed by Danish game development company PortaPlay and co-funded by the European Union. The game saw  Early Access on Steam late last year. It then saw full release on the platform on February 25, 2020. The Tactical RPG saw mostly mixed reviews leaning slightly on the positive side.  Now the game has on Nintendo Switch and other consoles and so it is now our turn to put the game through its paces.

The story of Broken Lines is set in an alternate reality around the period of the Second World War. Soldiers are being transported by air to fight an unknown enemy in a foreign land. Their planes are shot down and crash into the enemy territory. Only a handful of soldiers survived as they manage to bail out before as the planes were going down.

Upon landing on the ground, the soldiers find themselves scattered and try to regroup with one another. Only eight of them survived the ordeal but they are not out of the woods yet. Without orders and no knowledge of their mission, they decide to search the wreckage of the planes for any survivors and plans of their mission.

As the rag-tag band of soldiers set out, they encounter their enemy for the first time; formidable faceless foes that wear gas masks. Their motive for shooting down the planes is unknown but they seem to have a much darker intent in mind. The soldiers want to find their way back home but in order to survive the journey, they will need to pick their battles. Supplies and munitions are limited and differences in opinion between soldiers are just a spark away from rupturing the already thin ties that hold the unit together.

Broken Lines is a Tactical RPG that combines Turn-Based Strategy with Real-Time combat. With the clock on hold, the player can order their units to move and take action like moving in a particular direction, find cover, suppress fire, throw grenades, or advance/flank the enemy. They can choose to move all or only certain units before starting the clock and let their units take action. The clock will play out for about eight seconds as your soldiers act out their orders in sequence. The clock will stop short if new enemies are encountered.

When this happens, players can choose to continue to act order their previous orders or change tactics and give new orders. If a unit has not started a particular action, you can change their next action appropriate to the situation. However, if a unit is already performing an action, you can’t stop it partway. Instead, you can change every action after the one that is in effect.

As the units move towards the enemy, they will automatically fire their default weapon when in close proximity. They will then carry out whatever actions you have given them as well. The enemy also moves during the same turn which needs to be taken into account when suppressing fire or throwing grenades. These actions will still go ahead in the location you have designated, regardless of whether the enemy is still in the vicinity or not.

Depending on the mission, there is a limit to how many units can be sent into battle. They each have particular skills like being able to use grenades or medical provisions to cure other units. These can be swapped between certain units, allowing you to build up a preferred team of your choosing. Units can also have traits that are unique to them. These are like perks that can give them an advantage in combat.

The main goal of each mission is to reach the goal area. Sometimes you will be required to kill all the enemies in your immediate area before you can move out to the end goal. Sometimes you can break through the enemy’s defences without having to kill them all but you do risk losing some of your own units in the process. Permadeath is a prominent feature meaning anyone that you lose in battle will be forever lost throughout the rest of the campaign. You can retry the mission that so you have fewer casualties but it can affect your team’s composure.

Aside from the main campaign, there are also paralogue missions and side stories. These can help acquire provisions that are required to keep your units alive or help build rapport between your soldiers. As each soldier has unique personalities, they can get along or fall out with the others in their unit depending on the choices you make during the paralogue mission and side stories. This can also affect your soldiers’ stress levels if they get too high as it can make them less effective on the battlefield.

On the main menu, there is a solid tutorial that covers the basic commands and skills in the game. There are eight tutorials in all and range from movement and shooting to cover, flanking, and skirmish. It is recommended to use the tutorial before playing the main campaign so you have an idea of how to move and control your soldiers.

In the settings, you can choose the difficulty mode to three presets; Easy, Normal, Hard, or you can customize your own set of rules by changing certain parameters. Do you want there to be more or fewer enemies? Would you like them to team up or fight individually? Should they use explosives or weapon abilities? Do you want to be able to revive your fallen comrades in battle? These are just some of the variables you can change in the game to make it as easy or as challenging as you like.

Broken Lines has a rather sombre soundtrack with background music playing when between and during missions and cut-scenes. The sound design is pretty good as regards to SFX with weapon fire and explosions sounding realistic enough. It would sound more immersive if the perspective was closer up to the battle. However, from the top-down perspective of the game, it just feels like you are on the outside looking in, therefore not really giving you the same impression that your soldiers are currently experiencing.

The game does feature voice acting but it is limited to a single commentary from a female narrator and the audible affirmations from the soldier understanding your commands. All other interactions between soldiers are refrained to text boxes. This is a shame because verbal exchanges would help personify the characters that little bit more.

Broken Lines features both near-realistic graphics in gameplay and an artistic cartoon aesthetic during cut-scenes and conversations.  From a distant, top-down isometric perspective, the game looks reasonably sharp and decent. Even when zoomed in, the textures hold up, though they do look jagged on the soldiers’ models.

The game performs reasonably well on Switch though there are a few issues. Finding cover can sometimes be difficult to see and the soldiers can get caught up on cover when trying to vault over it. These are typical issues, that prop up with roguelike games as bugs and glitches can rear their ugly head at the worst possible times. They can be extremely difficult to replicate as every level is different so it could happen once and then never again.

I don’t know why but I couldn’t really get into Broken Lines. The story is interesting enough but I just there is a lot of walking from one end of the screen to the other and the lack of being able to issue group commands can make gameplay somewhat tedious. I have played my fair share of RTS and Time-based strategy games in the past and enjoyed most of them. The WORMS series for example, is a lot of fun and Command & Conquer is a series I have lost and won many a battle.

I will say that while it isn’t really fair of me to compare Broken Lines with the likes of these particular titles, I will try virtually any game at least once game once. Its particular game style just isn’t for me and there are a lot of variables to take into account like stress, composure panicking soldiers, etc. I am sure there will be plenty of people out there that will appreciate Broken Lines for what it is.

Broken Lines is an interesting game that is driven by story and relatively unique gameplay. It is not a game that will be enjoyed by everyone but it should be applauded for its direction to look into the ugly face of war and how it affects the mental stability of those afflicted by it.