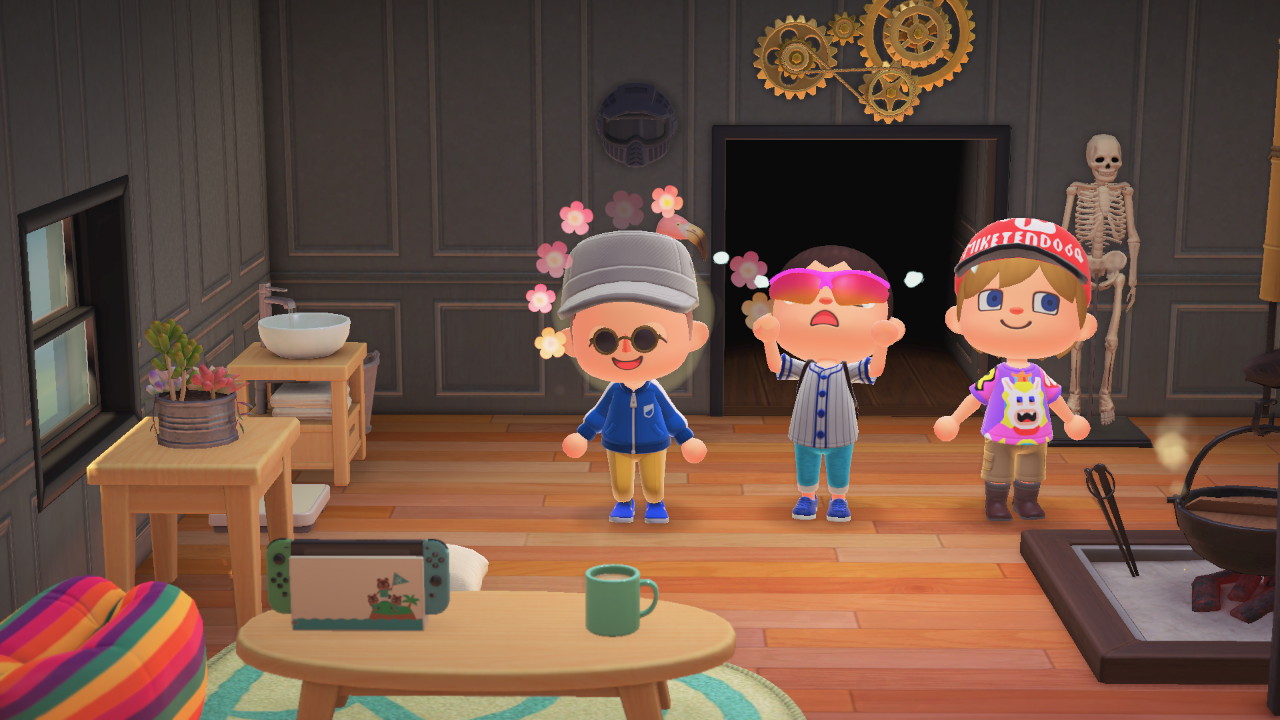 Animal Crossing: New Horizons and your Jerusalem, Judea, and Samaria

I want to preface my thoughts by saying this idea has been stirring in me for a few days now and it’s only now on a Monday morning at 3:30am that I began to put those thoughts into writing for you, our audience, and myself, mostly so I can get the sleep I need to function this week. I wanted to share my thoughts on Animal Crossing: New Horizons and the idea of “Who is my neighbor?”, in the context of the game and the community at large and my beliefs and upbringing as a Christian.

Love your neighbor, The Parable of the Good Samaritan

25 On one occasion an expert in the law stood up to test Jesus. “Teacher,” he asked, “what must I do to inherit eternal life?”

28 “You have answered correctly,” Jesus replied. “Do this and you will live.”

29 But he wanted to justify himself, so he asked Jesus, “And who is my neighbor?”

30 In reply Jesus said: “A man was going down from Jerusalem to Jericho, when he was attacked by robbers. They stripped him of his clothes, beat him and went away, leaving him half dead. 31 A priest happened to be going down the same road, and when he saw the man, he passed by on the other side. 32 So too, a Levite, when he came to the place and saw him, passed by on the other side. 33 But a Samaritan, as he traveled, came where the man was; and when he saw him, he took pity on him. 34 He went to him and bandaged his wounds, pouring on oil and wine. Then he put the man on his own donkey, brought him to an inn and took care of him. 35 The next day he took out two denarii[c] and gave them to the innkeeper. ‘Look after him,’ he said, ‘and when I return, I will reimburse you for any extra expense you may have.’

36 “Which of these three do you think was a neighbor to the man who fell into the hands of robbers?”

37 The expert in the law replied, “The one who had mercy on him.”

Jesus told him, “Go and do likewise.”

In our house, we have three Switches, one for myself, and one for each of my daughters. They bought one themselves and were fortunate to win one from a Playful Studios contest around Christmastime. So naturally, when Animal Crossing: New Horizons came out I was excited to play together with them and see how they would build up their own islands designing their houses and landscapes. Seeing as we lived under the same roof, and are currently in quarantine, like much of the world, Animal Crossing: New Horizon, is the perfect game to spend hours and hours in when you can’t really go outside.

My daughters had played New Leaf on the 3DS, and up to about two weeks ago were still checking in with their characters from time to time. The downside of our 3DS Animal Crossing game is that we didn’t have the ability to visit each other’s towns on one handheld. Now with multiple Switches in the house the ability to visit one another really opened up in New Horizons.

Already in the first few weeks we have visited each other both locally, by flinging open the gates, as well as through online play, when we had the opportunity to all three be together. A side note, we own one physical version of Animal Crossing: New Horizon for the Switch Lite, and share a digital copy between the other Switch, and my Animal Crossing: New Horizon themed Switch. When playing locally the Nintendo Switch internet is turned off and therefore the two digital game files can not be running at the same time. We discovered though, that by using a Dodo Code or visiting each other as friends through online play does work between both of the Switches playing the game digitally.

Playing together as a family gives us the opportunity to jump into each other’s island, share items and peruse our storefronts more leisurely than if I was visiting someone in a different house or across the globe. Oftentimes my daughters or I would sit close together so we can show each other what is in our stores or how an outfit looks and plan on buying things for each other. The way my daughters’ creativity has come out has been truly neat to see.

Another aspect of being together is defining for them ‘the community of Animal Crossing’. What I mean by that is that as sisters, there is oftentimes a back and forth negotiation of buying or sharing, and gifting items to each other, and sometimes they can get loud and argumentative. From time to time I have to remind them that the world of Animal Crossing works best when they share fruits, clothing items, fund each other’s building projects, etc.

Likewise, there are my friends, in terms of Animal Crossing: New Horizon I will define these as people I have met and seen in person, as well as, “my Switch Family”, or people I communicate with regularly through Twitter. My community of Switch owning, Animal Crossing: New Horizon playing friends is large, and it seems to keep getting larger. At the moment, whenever I turn on my Switch I usually see upwards of 30 to 40 friends playing Animal Crossing. Now it helps that I have a lot of people I follow that have friended me on the Switch, though in this week alone, I have encouraged a few people I know in real life to pick up the game, and have seen a few more friends already engrossed in the game. In fact, because I bought the Animal Crossing: New Horizons themed Switch, I sold my old Switch last week to a friend. When asked about a game they should get, I prompted them to buy New Horizons for their wife and themselves to play so we could visit each other’s islands while we couldn’t visit each other due to the lockdown.

Having had two friends jump into Animal Crossing: New Horizons a few days after me, one of which this was their first game in the series, I was in a unique position to teach them some of the nuances of the game, while also giving them an opportunity to learn how to play. I found myself flying to their islands almost daily to check in on the progress and also to share with them fruits I had that they didn’t, help them weed, or to drop DIY cards that I had duplicates of.

One friend, who has one Switch, whose sons are playing the game, will ask for myself or my daughters to “Come over plz”. That invitation to visit their island and share in the forming of his island’s story and help him proceed in the game to open up his museum, Nook’s Cranny, and finish townspeople’s houses, is a fun way to help his island grow.

Another aspect of the community that I find intriguing is DodoCodes and the opening of gates to people who you don’t even know. You can search Twitter, Reddit, and other social outlets to open up your gates or visit people’s islands. With a DodoCode you don’t need to be connected to a person and their Switch Friend Code, you can just put your island code and welcome in visitors.

I have visited several islands of people that I don’t even know. The things you can do on the islands of strangers is a bit more limited, though you can still help fund projects like bridge building, craft items to drop to assist in people moving in, find the best turnip prices, take and share fruit, and shop through items in stores. With the keyboard in Animal Crossing: New Horizons you can communicate the needs you have like, “I need clay or stone and can trade you peaches or oranges”, etc.

Another fun thing to do and things I have seen are community games of Hide and go seek, musical chairs, and more. I’ve played a few scavenger hunts and other games with eight random strangers. Being a part of activities like this is smile-inducing and helpful during the current pandemic we are all facing.

It’s also fun to see what people all over the world are making and creating in how they shape their islands to their personality and artistic styles. I have seen a plethora of uniquely laid out towns, from beachfront homes with paved streets, mountain cabins surrounded by trees, to outdoor dining areas. Animal Crossing: New Horizons is truly unique in that no two towns will look the same.

I have found that no matter what person I am visiting, whether family, friend, or stranger, there’s a sense of togetherness that no other game I have played has ever created for me. I want to check in on my daughter’s islands to see how they are progressing, as well as, see what layout their landscape and houses have taken. I have helped both of my daughters by giving them each fruit to grow, as they had helped me as well. By day two we had all the fruits available since each of our islands had different native fruit growing. We share flowers, tell each other what items are in store, share turnip prices, and more.

The way I approach friends in the game is similar, where I jump into the Twitter groups and tell a lot of the same things to my Switch family, but also we can communicate with the voice app or over Discord and talk and play together, though we are continents apart. There are friends and followers on Twitter that I have spoken to for the first time through the voice app. Being able to connect with people while we are in quarantine and have that connection, even if virtually, is fun.

At the core, Animal Crossing: New Horizons is a game that is made better by the community in which you play. Whether that community is your family, friends, or complete stranger everyone you meet in Animal Crossing is your neighbor. How you choose to act in the community, either avoiding helping another person and being someone who takes or being gracious and merciful and gives back, rests wholly on your shoulders. For the Switch Animal Crossing community to grow and thrive it will take consistent island check-ins with each other, as well as help in progressing in the game. If you have the means to help others learn the ins and outs of the game, gain specific items, pay off their mortgage, etc., help. A bit of friendly encouragement can go a long way.