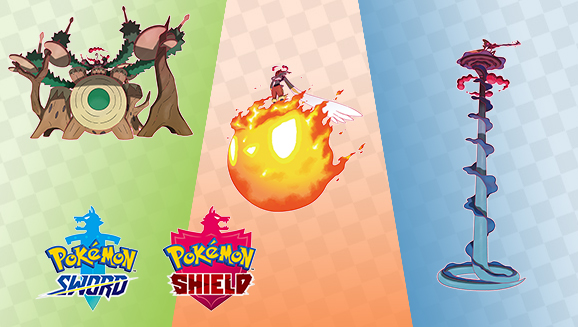 If like us, you are curious about how the Legendary Pokémon Kubfu, evolves in the upcoming Isle of Armor DLC for Pokémon Sword and Pokémon Shield, thanks to its Expansion Pass, today Nintendo have taken it upon themselves to explain how such a thing happens.

On the Isle of Armor, there is a new dojo for Pokémon trainers can go to, where they can encounter an NPC named Mustard. Via training players can obtain their very own Kubfu and go on to be given the right to challenge the Towers of Two Fists. One is the Tower of Darkness and the other is the Tower of Waters.

Players can only enter one tower and they must do so with only Kubfu to accompany them. By beating the tower you have chosen, Kubfu will then evolve into Urshifu, but the version you get, will be dependant on what tower you choose. (For Single Strike Style Urshifu, pick the Tower of Darkness, for Rapid Strike Style, choose the Tower of Waters.)

In addition to other things players can expect during their adventure on the Isle of Armor, there are other new characters, new outfits and so much more, including means to unlock gigantamax forms for the final evolution of your chosen starter.

Nintendo’s condensed summary of today’s news can be seen below, followed by an assortment of images and associated video:

That’s not the only details that have been shared, as even more were uploaded to the official Pokémon website and we have rounded up a lot of it, right here for you:

NEW FEATURES ADDED IN THE ISLE OF ARMOR AND THE CROWN TUNDRA:

New clothing items: There will be over one hundred new clothing items added in The Isle of Armor and The Crown Tundra. Spice up your adventure by changing your look with your favorite items!

Max Raid Battles against new Pokémon: There are Pokémon Dens on the Isle of Armor and the Crown Tundra, just like in the Wild Area. Check out a Pokémon Den that has a pillar of light coming out of it, and you’ll be able to participate in a Max Raid Battle! These are battles where you’ll team up with three other Trainers to take on a Dynamax Pokémon.

NEW DESIGNS HAVE BEEN ADDED FOR LEAGUE CARDS!: Pokémon Trainers in the Galar region make League Cards to introduce themselves. Of course, they are also used on the Isle of Armor and the Crown Tundra, the settings of the Expansion Pass. As you progress in your adventure in The Isle of Armor (Part 1) and The Crown Tundra (Part 2), backgrounds, effects, and frames that were not available in Pokémon Sword and Pokémon Shield will be added.

You can change your League Card using Rotomi’s Card Maker feature. Use these new designs as well as new outfits and hair styles, and create your unique League Card to show off your individuality!

NEW FEATURES ADDED IN THE ISLE OF ARMOR

A new way to battle: Restricted Sparring: The Isle of Armor will also introduce a way to challenge yourself to some new battles! With Restricted Sparring, you’ll be limited in what types of Pokémon you can use and forced to battle under set conditions! Give it a try, and give some of your Pokémon that are normally overlooked a chance to shine!

New co-op play feature: In The Crown Tundra, you and your friends will be able to enter and explore Pokémon Dens found on the Crown Tundra in a new gameplay feature! Deep inside these dens, you’ll have a chance to encounter Legendary Pokémon from previous Pokémon series games, so work together with other Trainers to get as far as you can!