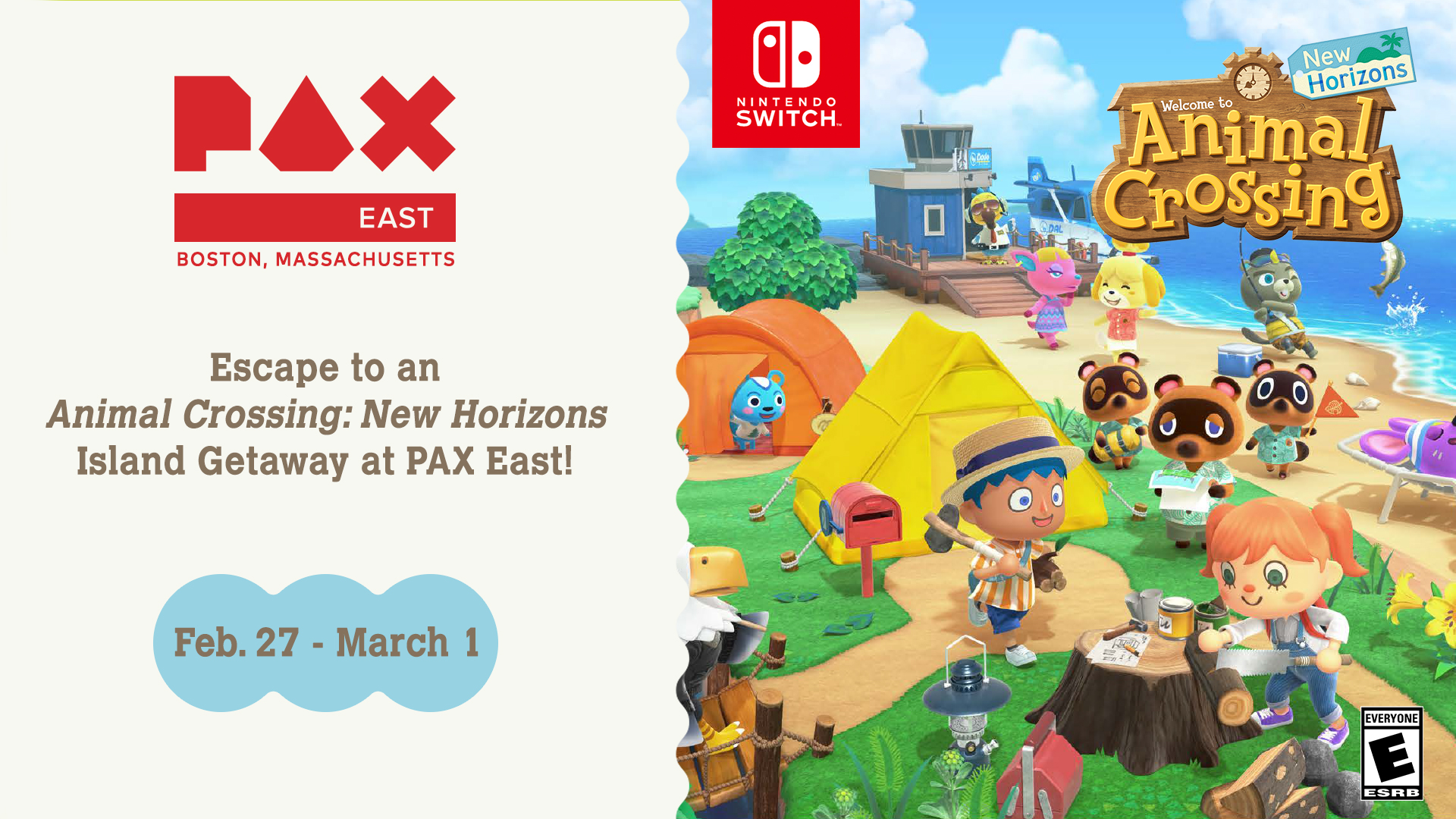 Nintendo America have revealed their plans for PAX East 2020 that takes place over this weekend (February 27th – March 1st). The main highlight is that Animal Crossing: New Horizons will be playable at the event, which I am sure most fans attending the event will be thrilled for. The demo for Pokémon Mystery Dungeon: Rescue Team DX will also be playable at the event. For those that are not afraid to be on stage will e ble to participate in multiplayer games for Luigi’s Mansion 3, The Stretchers and Pokémon Sword/Shield raid battles.

Starting February 25th, registered PAX East 2020 attendees will be able to sign up for a free warp pipe pass to play Animal Crossing: New Horizons via a priority access line. The full details on Nintendo’s plans can be found below.

Nintendo Provides Fans With Their First Chance to Play the New Animal Crossing Game, Along With Giveaways and Photo Opportunities With Nintendo Characters

REDMOND, Wash., Feb. 24, 2020 – Nintendo is bringing to life the world of the upcoming Animal Crossing: New Horizons game for the Nintendo Switch and Nintendo Switch Lite systems at PAX East in Boston from Feb. 27 to March 1. A full-scale immersive experience will allow attendees to explore life-sized recreations inspired by the upcoming game’s idyllic island getaway setting. Fans will have multiple photo opportunities in the Animal Crossing inspired environment and with costumed characters from the series, such as K.K. Slider, Isabelle and Tom Nook. Visitors who play the game will receive a special Tom Nook themed tote bag, while supplies last.

Attendees eager to jump into the world of Animal Crossing: New Horizons on Nintendo Switch will have a chance to try the first-ever hands-on demos of the game before it launches on March 20. A guided showcase on Nintendo’s demo stage will give visitors a tour of the game’s single-player mode as well. In the game, players can enjoy a variety of relaxing activities within a deserted island setting, like crafting, gardening, fishing, interior and exterior decorating, and interacting with charming new and familiar Animal Crossing characters.
“We hope fans are eager to visit the deserted island paradise of Animal Crossing: New Horizons, so this year at PAX East we’re bringing the island with us and inviting all attendees to play the game for the first time,” said Nick Chavez, Nintendo of America’s Senior Vice President of Sales and Marketing. “We’re looking forward to meeting with players and truly bringing our shared love of games to life.”
Animal Crossing: New Horizons is just the beginning of what Nintendo has to offer at this year’s show. Attendees can also visit Nintendo’s booth in the main lobby of the Boston Convention and Exhibition Center for playable demos of the Pokémon Sword and Pokémon Shield games. Explore the Galar region’s expansive Wild Area to catch and battle Pokémon, and interact with Pokémon in Pokémon Camp where making curry and relaxing with Pokémon is a great way to bond with your team. Players can even encounter giant Dynamax Pokémon in Max Raid Battles. For trying the demo, fans will receive a special postcard booklet featuring images from Galar, while supplies last. Pokémon Sword and Pokémon Shield players are encouraged to bring their own games and systems to the show to team up with others to potentially encounter special Pokémon in Max Raid Battles and receive a special Pokémon pin, while supplies last. Other fun activities include photos with the Pikachu costumed character, the opportunity to learn about the upcoming Pokémon Sword Expansion Pass and Pokémon Shield Expansion Pass and a guided demo of Pokémon Mystery Dungeon: Rescue Team DX.
For those who aren’t afraid of the spotlight, attendees may get invited onto Nintendo’s stage to participate in Pokémon Sword and Pokémon Shield Max Raid Battles. Nintendo’s stage will also feature the frightfully fun ghost-hunting action of Luigi’s Mansion 3, including the game’s competitive ScreamPark mode, a mini-game battle to determine the ultimate ghost-hunting team. Players can also try out the zany multiplayer game The Stretchers and work with a friend cooperatively to overcome the physics-based puzzles of each madcap mission.
Registered PAX East attendees will have the opportunity to reserve a free Warp Pipe Pass to use at the Nintendo Booth and gain priority access in line to demo the Animal Crossing: New Horizons game. Starting on Feb. 25 at 5 p.m. ET, visitors can sign in with their Nintendo Account at https://experience.nintendo.com/ to reserve a Warp Pipe Pass for PAX East Day 1, while supplies last.
An on-site store at PAX East will also be selling Animal Crossing: New Horizons merchandise and other Nintendo products. Fans who stop by the My Nintendo check-in booth with their QR code can also receive an Isabelle pin from the Animal Crossing series, while supplies last.
For more information about PAX East, visit https://east.paxsite.com/.