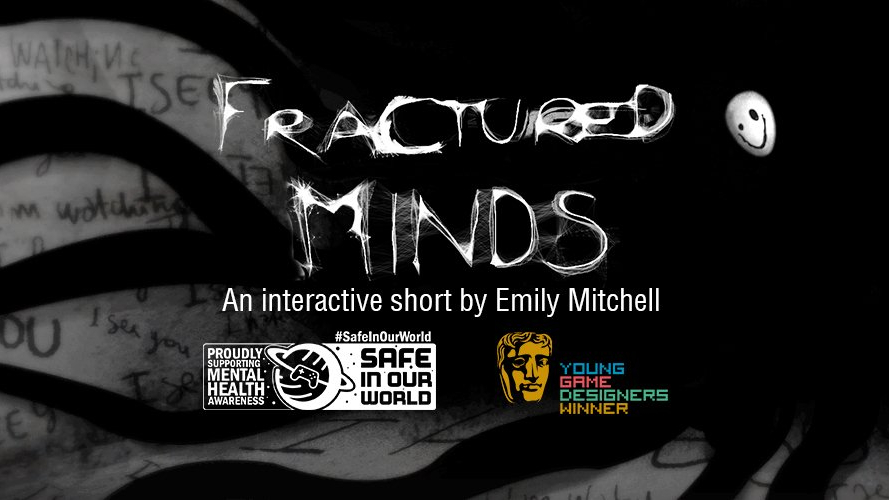 Many of us who play video games, we use them as a way to escape the harsh realities of everyday life. This can be particularly true for those suffering from anxiety or other forms of mental illness. Video games give us the means to liberate ourselves without having to leave our comfort zone. They provide a freedom and don’t judge us on our social or mental disability.

However, there are very few games that actually address the subject of mental health.  Even fewer are those that deal with it directly. One such game that does though and is not afraid to do so is Fractured Minds. Developed by Emily Mitchell, Fractured Minds is a short game that focuses on the issues and challenges that people with mental issues face. The game won the Young Developer’s award at the 2017 BAFTAs.

Fractured Minds is now available to play on the Nintendo Switch and to help promote the game, we reach out to Emily to talk more about her game and her experience with developing the game all on her own and why she chose mental illness as the key focus of the game. Special thanks go to Aaron Cooper and Wired Productions for setting up the interview.

Miketendo64: Hello Emily, thank you for joining us for this interview. A nice easy question to start off with. For those who don’t know, who are you and what do you do?

Emily: My name is Emily and I made the game Fractured Minds. I’m very passionate about video games and mental health!

Miketendo64: What is Fractured Minds about?

Emily: It’s a short game that explores the challenges and struggles of people suffering with mental health issues. Each room represents a different aspect of mental illness and how it affects people’s daily lives. I wanted the player to be able to use their own experiences and diverse perspectives of mental health to interpret the meaning of the game so that they could get a sense of what each level means to them personally.

Miketendo64: Your game is about dealing with mental illness on a day-to-day basis. Why did you choose this topic as the focus of your game?

Emily: I chose mental illness as the basis for my game because I have suffered with severe anxiety most of my life. By drawing from my own experiences I could make the game with a lot of passion and care because of how personal it is to me. I know that a lot of people suffer in silence so I hoped that people might resonate with my game and know that they are not alone.

Miketendo64: How long did it take to develop the game?
Emily: The game took me about 9 months to develop – I would work on it in my free time after school. I would usually spend a couple of weeks working solidly every night on it and then take a week or so break so that I didn’t get burnt out, as it’s quite hard to stay motivated for the whole 9 months.

Miketendo64: You did everything yourself, right? What difficulties did you face having to develop the game all by yourself?

Emily: I had to keep the level designs within the realities of what I was capable of making. For example, sometimes I would have a very ambitious idea for a level involving hundreds of models but I would have to change the design significantly as I realistically, wouldn’t be able to create all of the assets myself before the competition deadline.

It was also a bit overwhelming when I began making the game as I realized just how many models I’d have to create for each room and I definitely doubted if I’d be able to do it! One other difficulty was that when I began I only had basic knowledge of game creation so I had to learn a lot of new skills, mostly through Youtube tutorials! Animating the monster was particularly frustrating for me because of how complicated and time consuming it was, but I managed in the end!

You were awarded the young developer’s award at the 2017 Bafta Game awards. How did you feel about that?

Emily: It was the best day of my life! It was such a rollercoaster of emotions because I had a very bad panic attack in the train station on the way to the ceremony and was considering going home, but my sister helped me through it and I decided to push through the anxiety and go because I knew I’d regret it if I didn’t. Then I won and my worst day had become my best!

Miketendo64: You have teamed up with Safe In Our World and will be donating some of the proceeds of the game to the charity. How did the collaboration come to be?

Emily: After I won the bafta I was approached by Wired Productions who were starting a global charity designed to bring awareness of mental health issues within the gaming community. They wanted to use Fractured Minds to help launch ‘Safe in our World’, and I thought that was an amazing idea!

Miketendo64: How has the reception been for your game when it first released on Steam?

Emily: I am overwhelmed by the support the game has been getting and am so happy to see people playing my game and talking about the charity!

Miketendo64: How had the process been bringing the game over to consoles?

Emily: Wired productions worked with Le Cortex and Epiphany Games to manage the porting process and I couldn’t be more grateful for all of their hard work!

Miketendo64: Do you have any other projects in the works? If you could tackle another mental illness in a future game, what would it be?

Emily: I’m definitely keen to continue with the mental health theme because I’m really passionate about that subject, but I’m not sure I would focus on a specific mental illness but possibly a broader look into the whole theme.

Miketendo64: Lastly, thank you for taking the time to join us for this interview. Do you have anything you would like to say to our readers and your followers?

Emily: I’m really excited to be part of this movement and I think it could make a big difference to the industry to have a voice campaigning for mental health to be spoken about and taken seriously and for video games to be part of the solution. To unite the community by creating a support network for gamers and connecting people through their love of games would be an amazing first step!


Categorised in: an interview with, Feature, Interview, Nintendo, Nintendo Switch