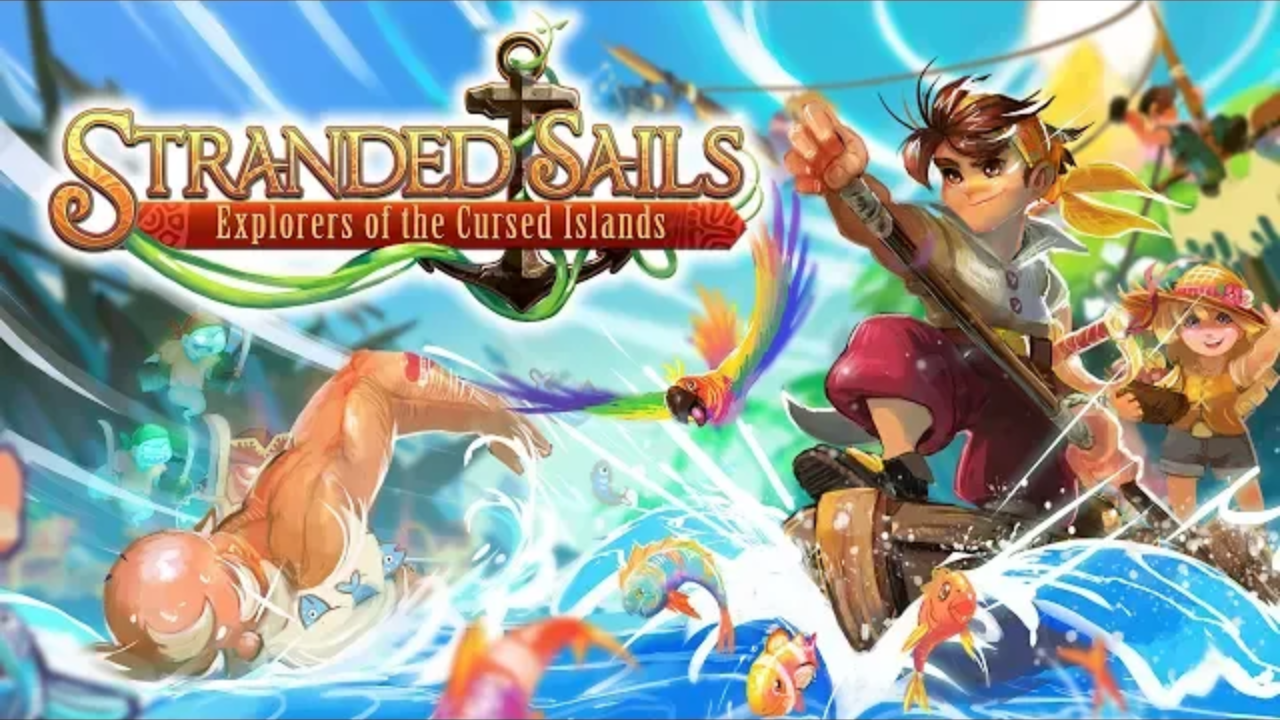 Stranded Sails – Explorers of the Cursed Islands (shortened to Stranded Sails for this review) was released on Apple Arcade, PlayStation 4, Xbox One, Microsoft Windows, alongside the Nintendo Switch version this October. The game is a collaboration between Maple Whispering Co. Ltd., rokaplay, Merge Games, and rokapublish.

You start off in Stranded Sails choosing a gender and naming your protagonist before jumping into a small town where you need to gather up some supplies, talk to a few folks, and head off on your journey on the high seas. Along with your father and a small crew of men and women, you embark North only to be swept up into a storm and crash on a set of seemingly deserted islands. Once you arrive on the main island you are tasked by your father to find all the surviving crewmen and set up a small village on your new island home.

Along the way you will be asked to collect items to start growing some food, building shelters, and finding other tools to help you fish and ward off enemies. Your objectives take you around a half dozen islands scavenging for items, cutting down trees, digging up plants, fishing, and more. As you venture further and further into the game you will find yourself uncovering the mystery of the surrounding islands and its previous inhabitants as you work to get off the island and save your crew.

The main gameplay of Stranded Sails has you managing your stamina and resources by growing and cooking food for yourself and later on, for your crew. There is a bit of farming simulation involved, though the gameplay loop is light and simple enough for younger gamers to get into and enjoy without being too bogged down with managing their crops. You will need need to dig holes, plant seeds, water, and harvest your crops by walking near them using the action button to harvest them.

Once crops are harvested you can cook them in the kitchen or later on in the stew for your crew members to also eat. The cooking game is a bit of a minigame within itself as you start off not knowing which items you need for a recipe and by figuring out which items you need by implementing the rules from the board game ‘Mastermind’. Valid items in you recipe will be marked with a green Check, while wrong items have a red X, and misplaced items have a yellow swap arrow icon.

Cooked items become important in how you plan out your day as each task you do involves using up stamina. Walking, running, chopping trees, fishing, rowing, etc all use up a bit of stamina, so for your character to do any kind of activity or exploring you need to make sure you stock up on food and dishes to be able to take on longer journeys.

The aforementioned stew is used to create dishes for each of your crew men and women. Each crew member has a particular ingredient that they like and when you use it, they show appreciation and build up the XP meter quicker. When you fill up the meter there is oftentimes a special item you will be given or an upgrade to an existing item, so it is very important that you pay attention to which foods each crew member likes.

Along with farming and cooking there is fishing, which adds another ingredient to your cooking. The fishing minigame happens at small ripples you will see along the shoreline. Once you hook a fish, you need to press the action button in time with the overlapping ripples to ensure a correct pull of your rod. Once you have caught a sea creature you can add it to a recipe or stew later to feed yourself or your crew.

As you progress through the story, finding crew members and exploring the island, you will also need to find materials. Materials can be used at crafting tables and turned into other items which can be used to construct homes for the crew, climbing ropes, bridges, and more. Materials can be found throughout the neighboring islands and you will need to use the rowboat and row out to each of them throughout the game to find the materials you need, like wood, metal scraps, and ropes.

The primary tasks you need to complete to move the story forward are always shown in the top right of the game’s H.U.D. which is helpful in knowing where to go next. The overall progression of the game is pretty linear, though you are able to take your time and work at your own pace to complete each objective.

Stranded Sails has a lot of smaller moving parts in the overall gameplay with farming, fishing, crafting, constructing, and combat. Each of those parts though don’t necessarily add up to an enjoyable experience though and they do wear a little thin in some aspects. One thing that was remedied slightly in a post-launch patch was reducing how much stamina is used whilst walking, chopping trees, and doing other activities..

The stamina meter is still present and all in all the use of it in the game only seemed to hinder my enjoyment because I would have to stop to eat or fast travel back to camp if I was nearing exhaustion. Considering that blacking out from lack of stamina had no long-term consequences it never made sense to me why stamina was implemented in the first place for the game.

Aside from some pretty rote characters and six islands, there isn’t much in Stranded Sails outside of the linear campaign. Sure, there are hours to be spent wandering, farming, fishing, and building, but is all of this fun to do? For younger gamers they may like the slight challenge of managing their food and stamina while completing tasks, but most of the quests are the same and offer little in terms of challenge.

The music in Stranded Sails is pretty basic and repetitive. One of our other writers even stated that some of the music reminded him of canned stock soundtrack he had heard in a previous game he had played. Whether or not it was the same audio used, just note that the soundtrack is pretty bland and nothing you will really remember as epic.

Character dialogue is also not really used aside from some generic gibberish sounds. One thing of note is subtle changes in the sounds your footsteps make as you walk, though that may be the only unique effect used in the game.

Stranded Sails uses a top down isometric viewing angle which is good for the most part. Whenever there were items in front of you the foreground would sort of disappear around you so you could still see your character and what you were doing. The game does feature a day/night cycle and along with that, there are visual changes to the colors of the ocean and ground and candle/fire lights in the village will glow once nighttime hits.

The graphics visual style is a low poly look that is smooth and reminded me of games like Mages of Mystralia and World to the West, which we had reviewed in the past. The ocean waves reminded me of the cell-shaded style found in The Legend of Zelda: Wind Waker. I did notice some slight framerate issues when the game would save, which is often as you walk around the game world. Other than that the game ran pretty smoothly.

Stranded Sails tries to incorporate a lot of various game mechanics like adventuring, crafting, farming and more into its game which is decent, but it’s hindered ultimately by it’s stamina meter, which has no real consequences aside from sending you back to camp if you run out of energy. It would have been nice to see some kind of punishment for being hasty with your adventuring and not returning to camp to sleep or eat, but at the time of this review, that isn’t the case.

Stranded Sails – Explorers Of The Cursed Islands  is just a mediocre game. There’s not much to love, but it’s enough maybe to keep younger gamers enthralled. The story checks off the normal “stranded on an island” troupes and with the game being more linear, it fails to become an exciting adventure game.