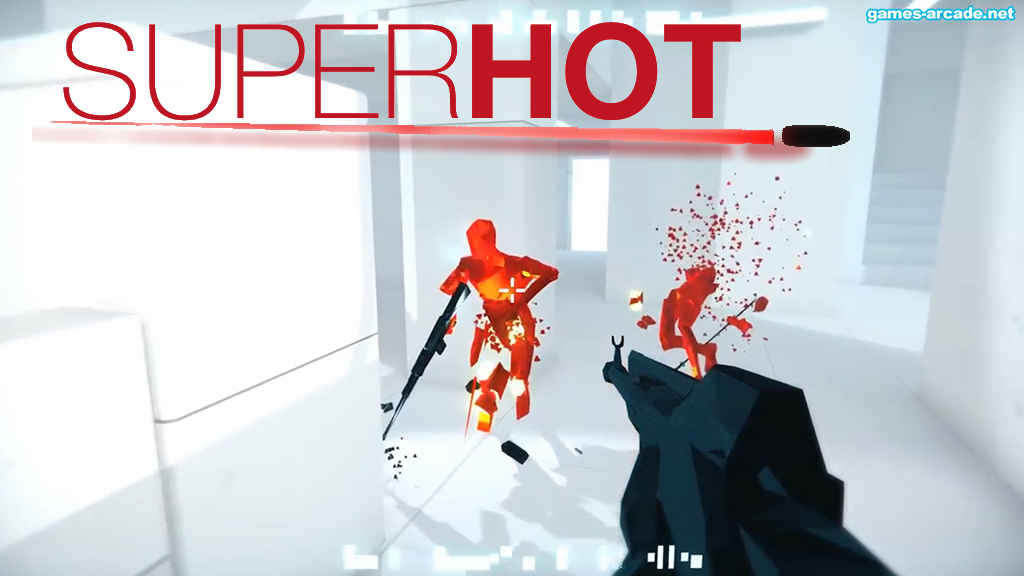 SUPERHOT debuted back in February 2016 and has since found a home on a variety of systems and well known appeal in the VR world as one of the best VR games to date. The game has finally made its way onto the Nintendo Switch as a first-person shooter, a genre the Switch generally lacks when compared to other systems. SUPERHOT was shadow dropped on the Switch back in August.

The game starts off within the computer PIOS system and a conversation with your friend asking about whether or not you have played Superhot. From there you download the game and then are dropped into the first level where you begin to slowly learn the gameplay mechanics and progress level by level, clearing rooms of enemies touting handguns, shotguns, katanas, and more.

The game doesn’t rely on a heavy narrative setup and since it’s level by level, and has no spoken dialogue the only banter you get is between you and your friend through the aforementioned computer chatroom. The main hook seems to be to survive and escape alive while also looking SUPERHOT while doing so. You’ll probably die a lot while navigating SUPERHOT’s corridors, stairwells and various room layouts, but it is the hook of quickly restarting and trying again, which plays out as a great gameplay loop.

In SUPERHOT you move your character in first-person with the left analog stick. By moving in any direction in SUPERHOT time moves forward at a regular pace. It is only when you stop moving to take in your surroundings and plan your attack pattern, that time screeches to a halt. While time doesn’t slow down indefinitely it does crawl which is a unique gameplay mechanic which reminds me of how Spider-Man’s spider sense worked in some of the older Spider-Man movies or how Neo fought in the Matrix.

Along with moving in the game you will need to dispatch enemies with either your gun, sword, or melee punches. For the most part, enemies die with one bullet or slash of the katana, whereas it will take you two punches to defeat them. Levels are designed in a puzzle-like manner in which the way you dispatch enemies is oftentimes up to you and will require you to pick up and use guns, or throwing a gun at enemies to knock them out or off balance.

Some levels have you picking up glass bottles to throw at would be attackers as well and then quickly catching their weapon in the air and turning it around on them. These puzzle sections were some of the best and really capture the essence of what makes SUPERHOT’s campaign enjoyable and replayable.

SUPERHOT’s single player campaign won’t take you long to beat. It may take veterans of the series just a few hours to complete and novices a bit more as some of the levels do have a trial and error style of completion to them. As the Switch port of the game was my first foray into the series, there were a few times where I found myself dying mostly because I was more worried about moving through a level and not taking in and understanding my surroundings and weapon options first.

After you complete the main campaign you can unlock an endless and challenge modes which were fun, but by the time I had completed the campaign I had felt that I had seen all that I needed to in SUPERHOT and haven’t really cared too much for those modes. Challenge mode is sure to excite some fans though as it adds in certain modifiers to levels which can include limitations to weapons that change the dynamic of the levels entirely.

The Switch version does let you drop in and out of using motion controls with the (-) button which could be very helpful if you enjoy that level of control in your shooter games on Switch, though I never really used it as I felt that the precision of the sticks were enough for my taste.

SUPERHOT uses a minimal approach to its audio soundtrack allowing the weapons in the game to stand out. There were times when enemies would shatter glass or shoot a round of gunfire behind me and the directional audio queues helped me know when and where to look and aim.

There is however, the finishing of a level audio bit of ‘Superhot. Superhot’ which plays over and over again while you watch your level completing run. That bit of audio is usually accompanied by a euphoric feeling of ‘just one more level’ where I would hit a button and jump right in to the next level.

I don’t think SUPERHOT needed any kind of background audio as for many it would become repetitive especially if you were playing levels over and over again while trying to have a perfect run.

SUPERHOT uses a black and white and red art style. Black for the items and weapons you can pick up and use which is helpful in discerning quickly which weapons you have at your disposal. White and subtle shades of grays/blues to layout the levels walls, counters, shelves, and doors. Red for enemies, which come at you from various entry points in the world, as well as with different speeds and weapons. Knowing quickly which enemies are holding what weapons will help you plan out your attack order and lead to quick victories.

Performance-wise the Switch never really stutters or drops in most aspects of the game. Some people have said to me that the between-level PIOS system had frame rate issues for them, though I never noticed it. Most of my gameplay was in docked mode which seemed to run smooth at all times for me. I did try handheld mode and I can assure you that SUPERHOT on the go, is also a pleasant way to play without frame rate issues or stuttering. The game looks really good in handheld to, mostly due to the crisp clean minimalist graphics.

Superhot is a unique game, and on the Switch there is really not much else like it. If you have been wanting to try the game since seeing it advertised on VR and other consoles, you will not be disappointed. While short in terms of completion time, SUPERHOT is really a great addition to the Switch’s growing library of FPS games.

If you have been wanting to play Superhot and don’t have a VR capable set up at home, The Switch port of Superhot will not let you down. It is a great game and has a unique gameplay hook which will keep you pressing that next level button in no time.