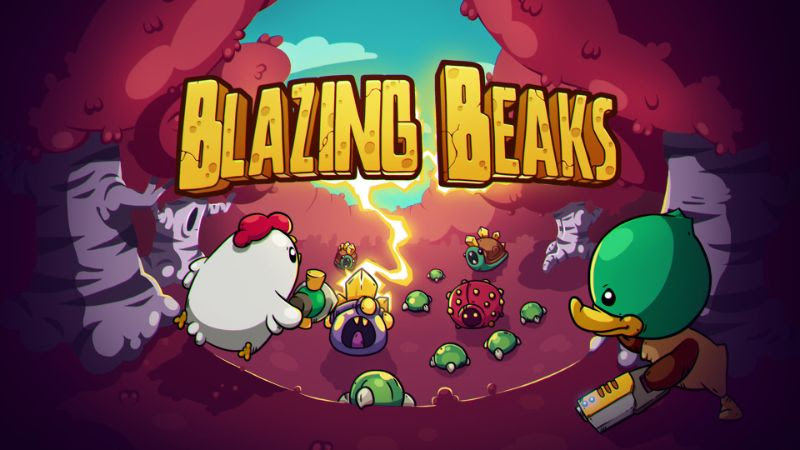 Developed by Applava and Published by QubicGames, Blazing Beaks released in May of 2019 on Nintendo Switch and PC. This is Applava’s second game to develop, the first one being Football Blitz for PC in 2017.

Though Blazing Beaks does have some deep hidden lore, this isn’t placed at the forefront of the adventure. Those interested in the story being displayed in the background of it all can speculate and figure out what’s going on, but skipping out on it doesn’t take away from the overall experience.

Blazing Beaks is a rogue-lite game about armed birds blasting their way through six different areas while taking down monsters and evil creatures. A key feature of this title is the risk-reward system. There are two types of collectibles players can obtain while playing, items and artifacts.

While items have advantageous benefits like giving players more HP or faster reload time, artifacts give players negative effects like slowing down the fire rate, taking all keys from the player when taking damage, or even insta-killing yourself. Players have the option to skip out on artifacts, but if they keep them for long enough and find a shop, they can be traded in for better items than those you find from enemies. Finding a balance between grabbing artifacts or omitting them is key to winning, but being greedy is never good.

Speaking of which, the shop is a great place to rest up and buy new weapons (or steal them, with the consequence of not being able to buy anything else for the rest of the run), trade-in artifacts to a shady looking bird, and revive a fallen teammate. Shops aren’t the only area you can go to, as there are also secret rooms hidden behind invisible walls, locked doors, and the Boss door.

Floors are randomized and they have enemies, destroyable environmental objects and traps. Enemies can drop keys or coins, or depending on the enemy, they can also explode or spew toxic.

Blazing Beaks has a lot of content to offer. Though the quantity doesn’t come on par with other rogue-lite titles like Binding of Isaac or Enter the Gungeon, it has just about enough to stand out.

A quick rundown on what’s in the package: two main modes, being Story and Tournament. The story can be played single-player or co-op and has you tackling six different areas and a boss on each floor. There are three different difficulty settings, as well as an option to play a seeded run.

Tournament has five multiplayer versus game modes that can be played with up to four players. There’s Deathmatch (last one standing wins), One Gun (the same random weapon is picked for everyone), Drop Hearts (players drop hearts, and other players can pick up those hearts), Skull Keeper (keep the skull to yourself until time runs out) and finally Hunting (throw spears at one another), as well as a random option for those who are undecided on what to pick. There’s also the option to pick the number of hearts player starts with, the area players fight on and a number of rounds.

Additionally, there are 75 unique items, 57 harmful artifacts, 9 helpful abilities, 47 weapons, 8 playable characters, 32 enemies and 6 bosses. You can check out all the information regarding unlocks and characters in the Log menu.

The soundtrack is kept to a minimal with only a few tracks being played, the game focuses more on the sound effects. Weapon firing, enemy grunts, abilities and everything else in-between sounds great. The soundtrack itself is good but overall forgettable, aside from the main theme that plays when in the menus.

The pixel art is great, every character has a unique and adorable design, as well as the enemies which all stand out from one another. Characters are charming and expressive, especially with how some enemies react as they attack or die. The visual cue with enemy attacks is made clear as well as the environmental traps. The game performs solidly with a steady frame rate.

It’s a bummer that Story can only be played with 1-2 players instead of the 3-4 player option Tournament allows. It’s evident that four players in Story mode would make the game a lot easier to go through, but it would’ve been a nice addition overall.

Story mode is no easy task in completing. Though you should take in consideration the randomness in drops and enemies is always different, the gameplay is challenging either way. The best way to tackle the floors is balancing artifacts, taking distance and a pinch of good luck.

Skilled players are rewarded handsomely, and I loved the feeling of having good loot and a good head start with the early grind at the beginning of a run. If you get a rough start, later on in the run it’ll prove much more challenging to advance.

The randomness of each run made it very fun to come back and give it a few tries, the experience felt similar but never the same. I could go hours on end playing and it’ll always feel just ever so slightly different. <av<cQ You’ll probably have a lot more fun when playing multiplayer, especially with the Tournament mode with 4 players, as that will most likely guarantee a good laugh and lots of screaming.

Blazing Beaks is a LOT of fun. Those looking for a fun and challenging single player or multiplayer experience can play hours on end without having the gameplay become monotonous. The game is well worth the $15-dollar price tag.