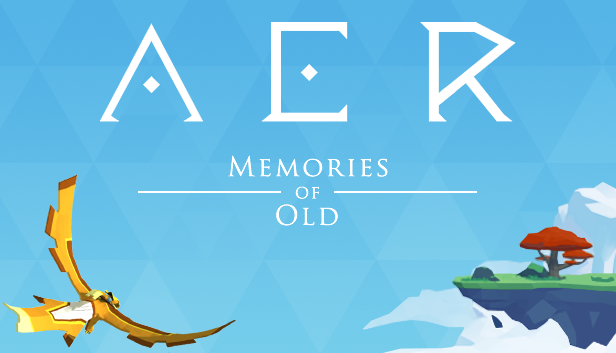 September 1, 2019 1:26 am Published by jonathanober Leave your thoughts

AER: Memories of Old was recently released for the Nintendo Switch. The game had been previously released on Steam and is available on Windows, Mac OS, Linux, PS4, and Xbox. It also won the Game Concept Challenge back in 2013.

In AER: Memories of Old you played as Auk, a shape-shifting girl that can become a bird. The basic premise of the story is to pilgrimage to the Land of the Gods and uncover the mysteries of the floating islands and why there are only a few surviving inhabitants. Your journey will take you soaring North, East, and West trekking through dark caves and temples to find keys left by spirit animals to recover the shards of a broken tablet.

During the 2 ½ hour campaign you will fly to various islands and speak with the few surviving members of your village which will aid in directing your path. Along the way, you will be tasked with opening up temples and caves and recover the missing pieces to the past.

On the islands, you will also find the remnants of a broken and scattered people that hint at great destruction and falling out with the Creator. I don’t want to spoil the story, but if you want to get the most out of the world-building in AER: Memories of Old, I recommend finding all of the spirits of the people and scrolls scattered throughout the islands.

AER is a walking…er…flying sim of sorts where you will frequently change from human to bird form as Auk will need to fly higher and further to visit the main islands and their caves or temple. There isn’t much in terms of items or buttons you will use in AER. You direct Auk with the left stick and can use her lantern with Y to see through the darkness, uncover the remnant spirits of civilians and activate switches in the temples and caves.

In the main overworld, you can double-tap A to jump and switch to your bird form. While in the sky you can tap Y to climb higher and soar faster through the clouds. You can swing the camera around with R and center as well behind Auk, or as I preferred just have the camera auto center after a few seconds of moving forward.

The game is a straightforward linear story in which you typically will need to find a key to then open up a temple and then uncover a tablet shard within the temple. There are three shards in all to find and therefore three keys to find as well. If you ever get lost you can always ask for directions by heading South to your village and talk with one of four characters to get a hint at what is next. Also, along the journey, you will read scrolls or inscriptions on walls that will give hints as to where you need to go next.

There are a little over a half dozen main islands and smaller islands dotting the skies in AER. That being said many of the smaller islands have little to nothing on them and are therefore not necessary to walk around on and search. You will find that the main islands and some of the larger sub islands have spirits of people on them or scrolls which will give you insight into the overall back story of what happened and why the world and its people are no longer around.

After completing the game there isn’t much in terms of extras of distinct reasons to replay the game. This isn’t a speedrun kind of game though some people may get a kick out of how fast they can complete the game and the temple puzzles.

If there is one place AER shines it is in its subtle nuanced music and ambient sounds. I am oftentimes impressed with games that beg to be listened to in either a quiet room or while wearing a decent set of headphones. A few notable sound effects include the crunching of the snow beneath Auk’s feet and the hushed dialogue of the ‘spirits’ of past civilians as you approach their past reflections. There was one place in particular within a temple where the audio of people locked inside a crumbling room echoed despair and sadness.

AER: Memories of Old’s graphics are a low polygon fare which reminds me of Mulaka, Drowning, For the King and Morphite. The basic design is great and fits the style of the game, though at times the lack of shadows in some places can make some areas seem bland and uninteresting.

I played in mostly docked mode and noticed some odd clipping into the background from time to time and a surprising amount of frame rate drops and jittering. The inconsistency in which the games frame rate dips and dive was also a bit jarring as many of the wide-open areas would be crisp and without issue, but then going into one of the many temples or smaller cave, would lead to slow down.

If you are looking for a game that is tranquil and subdued in its approach, AER: Memories of Old can be a decent game to play. The story is well done, though nothing extravagant or compelling and ‘must-see’. I will say though that the atmosphere that the developer committed to deliver on all areas. The visuals, sounds, and overall story are well done and should be appreciated by Switch owners that are fans of the genre.

Since the puzzles are basic and the world isn’t all that large, AER: Memories of Old is a game that is quick to complete and you will see everything in it in roughly three hours. It’s hard to recommend the game at its current asking price because of its short completion time. The game is good but it doesn’t stand out amongst other games in the genre.