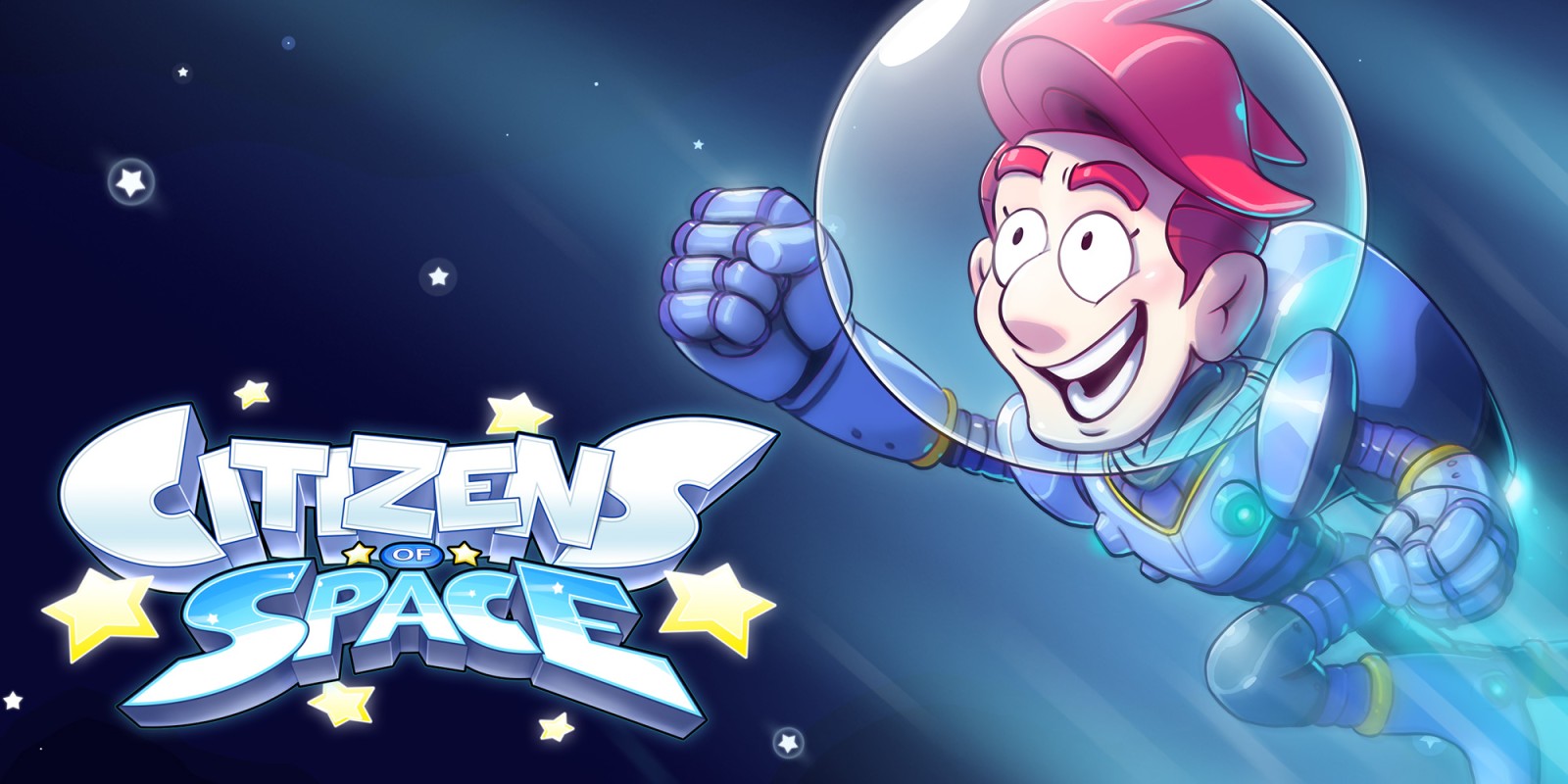 Eden Industries broke into the hearts of many a 3DS owner a mere 4 years ago with their retro-style RPG hit Citizens of Earth. A light-hearted romp around a cartoon-esque landscape wherein you use your charismatic politician to recruit different citizens to your cause and then make them do all of the dirty work for you.

It’s humor, art design, and combat reminded many of the venerable Mother series, and the humor and art design have brought their charms back for the sequel, Citizens of Space. This time we find ourselves as the first Ambassador of Earth recruiting humans, aliens, and robots alike for our noteworthy cause, albeit this time with a new combat system.

We find ourselves in control of the first Ambassador of Earth set to deliver his speech to the Galactic Federation, and our first companion citizen (our assistant, whom I named Kif) ushers us to the meeting hall. As we give our presentation to the federation, we go to pull up a live feed of Earth and discover that it has gone missing (!!). We then set out on an intergalactic journey recruiting whomever we can to aid us on our adventure to discover where exactly the Earth is hiding, and who is hiding it!

As mentioned before, Citizens of Earth is a turn-based role-playing game with an emphasis on the recruitment of party members for various roles. Not all party members are usable in combat, but all party members serve some purpose. You can have up to three combat party members at any given time, and each of those party members can be paired up to another support citizen to provide a bonus. Support citizens give you additional game options like the ability to modify the encounter rate, spawn cloned versions of defeated enemies, craft items, and modify other aspects of the game and its systems.

To recruit your citizens, sometimes all you have to do is ask when you first encounter them. Most often, though, you will have to meet some requirements or go on a quest for them. The former is generally “meet me at this planet later on”, and the latter is more often than not completing the main narrative mission. While there are some side quests available in the game, they feel more like gimmes than having to deviate much to achieve. In other words, you will often complete these side quests without trying to do anything special.

Combat in Citizens of Space has shifted from the second-person static image menu-based combat we associate with old school RPGs (familiar to veterans of Dragon Quest and Mother series) to a side view menu-based system where we have minigames to maximize the effectiveness of our attacks. In this way, it actually reminds me more of Yo-Kai Watch than anything else, but it is so drastically different in execution otherwise. These minigames can also be turned off once you recruit a certain citizen if this isn’t really your thing.

Each party member has a range of actions that are divided into different categories. Some actions build up points, while other actions require you to spend those points. Generally you will have to use those actions which build up points for a few turns before gaining access to your more powerful attacks and actions, but they also carry over to the next battle, as every character has a maximum amount of action points, and they can be added to using items outside of battle as well. In addition to the action points, you also gain charisma, which enables your character to use items and take other actions within battle.

This item use is done immediately and thankfully doesn’t influence the combat turn order. Each belligerent in combat has a speed score, and some actions can affect this order. You can also modify these stats with items from the command menu (which uses charisma). When being attacked, you can also time button presses to mount a defense from your enemy to help reduce damage.

Beyond combat, Citizens of Space also has some labyrinthine exploration between or within locations. Occasionally you will run into a puzzle here and there. Most of these can be taken care of with minimal trial and error. This last bit summarizes most of the game pretty well- move forward and use a little bit of trial and error and you can coast through, for the most part.

Citizens of Space is a straightforward, linear role-playing game driven by an absurd, but amusing premise. Each citizen that you run across has a unique personality, as trope-filled as they may be, and combat is made a little more entertaining by the inclusion of minigames to maximize the effects and lend some more interactivity to the old menu-based system that isn’t really broken. The depth comes from the interesting ways of combining your characters and recruiting as many citizens as you can.

Citizens of Space is interesting here because while I enjoy the music while I’m playing, the second I turn it off, I can’t remember a single note or melody. The sound effects work well considering the general atmosphere of the game, and the voice acting is the same. That is to say, the sound effects are all very familiar and somewhat generic, but it’s a cartoony world filled with quirky characters and so it’s expected. There is a lot of voice acting in the game, and the character voices are all exactly what you expect when you encounter a character. You can just look at their design and job and know what they’re going to sound like. It’s uncanny how predictable it feels, but it really just enhances the overall feel.

Citizens of Space looks like a Saturday Morning Cartoon came to life and adopted tons of menus that you can pull up to interact with it. It runs buttery smooth docked and handheld, which is unsurprising considering. While Citizens of Earth was obviously held back from looking as smooth as possible on the 3DS, its sequel on the Nintendo Switch has no such limitations keeping it from performing at its best.

Citizens of Space is a quirky little adventure that loses itself a little in being a lot too easy. While the game itself has some interesting characters, humor, art design, and even a fun combat system (which I don’t find all too often), it really starts to get a little ho-hum after about an hour or so in one session. I often felt like I wasn’t playing the game as much as I was just moving across the landscape to get to the next dialog box.

While most role-playing games are a bit more akin to a combination of Risk and Clue, Citizens of Space feels more like Candy Land. Pick a card, move to the appropriate square, and then wait for your turn to do it again. This is great when you’re looking to take a break from overly serious or melodramatic action games and more epic role-playing games with narratives that are dozens of hours long on the short side…but it probably isn’t going to be bringing you back for subsequent playthroughs.

Citizens of Space is a nice, colorful romp through a limited universe as you use your dense snake oil salesman of a delegator to interact with a cast of colorful, but all too familiar characters. If you’ve watched more than 3 or 4 traditional cartoons in your life, you’ve been through all this before, with slight variations. Fun as a palate cleanser, not as a binge playthrough.