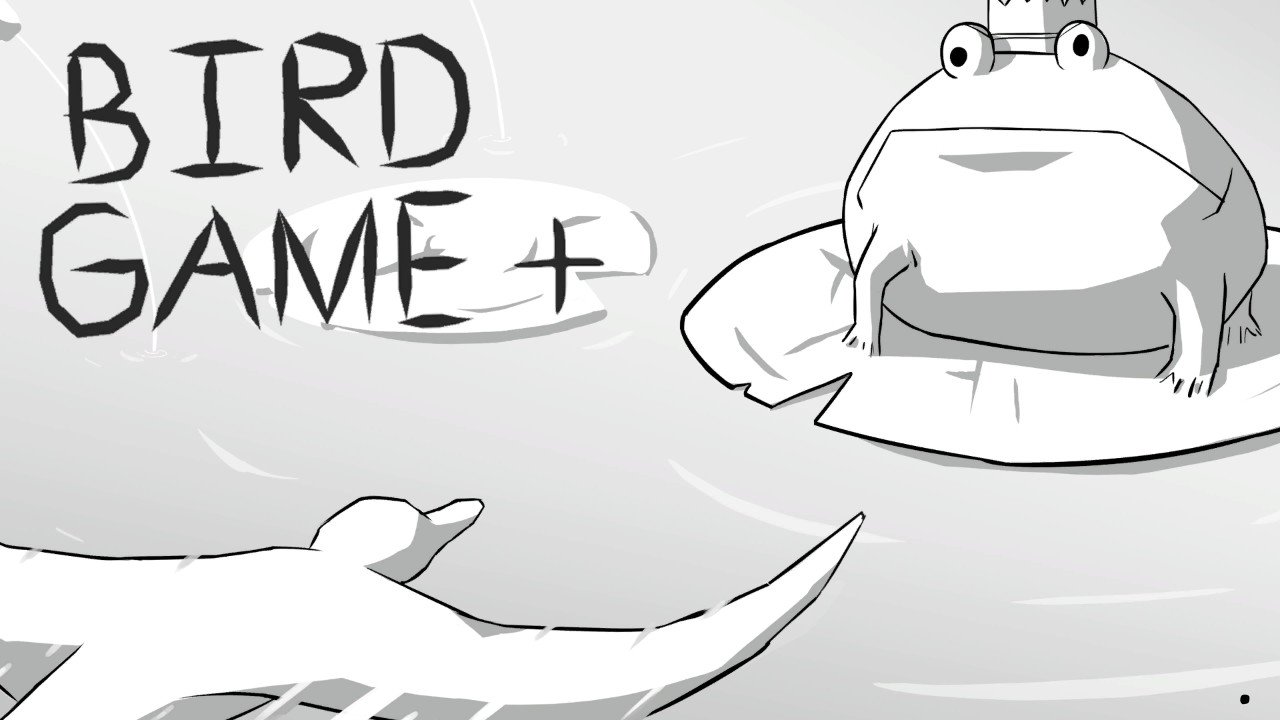 Previously released on the likes of Steam in 2018, developed by Bryan Tabor, Bird Game+ is a game all about taking flight and now thanks to Ratalaika Games, a Spanish developer well known for porting and publishing indie games to various titles, it has now flown the coop to Switch with added content.

Bird Game + has no apparent narrative to it, but with some deducing, we can give the title a basic premise to work with. Bird Game + is about a bird flying through the noir world while navigating and avoiding its own obstacles and enemies.

Bird Game + has you navigating a bird through three short levels while dodging both the dangers of the environment and its enemies. The bird always flies forward and you control where he goes using the analog stick. Although the game presents itself as being able to move freely wherever you want, there’s not much liberty on where one can go.

Movement is much more restricted and it feels like the character is always being pushed back to the middle of the screen, like if you were on some tracks at a roller coaster. Although the game does tell you there are various paths, most of them are near impossible to find and don’t unlock any bonuses for finding them. At times, the path would branch to two sides; one time throughout my playthrough the path I took was a dead end. I unintentionally soft-locked myself by activating a checkpoint, and there was no way of going back aside from restarting the level.

There are a few other actions one can do with the buttons; “Y” supposedly makes your turning sharper, faster, and gives better mobility, but it’s hardly noticeable. “L/R” allows you to do a barrel roll, which is useful in open areas but not so much in tight spaces. Holding “A” grabs certain objects, this is used for only a handful of occasions.

The level design and object placements are, in some areas, very confusing to navigate through. The camera doesn’t help with the navigation either, because it doesn’t make it clear where the player is going to.

As mentioned earlier, there are a lackluster three levels in total, which can all be beaten within the time-lapse of half an hour to an hour. There are three bosses in total, one at the end of each level. The bosses themselves are relatively straightforward, but their attack patterns are for the most part confusing and the way to defeat them is hard to find. Attacks go on for way too long and give only a small gap to attack back.

With regards to modes, there’s the story levels (mentioned above) and Endless, which does just what the name suggests. Additionally, there are eight challenges to complete, six of them are boss challenges that can be completed while playing the campaign normally. There’s an online leaderboard where players can see who has the fastest completion time of a level, but unfortunately, the leaderboard tended to provide error codes and crash.

The music works great with the game’s ambiance and setting. It’s relaxing to listen to, uses soft and slow beats, and overall never got annoying to hear. My only issue with the music. is it loops a bit too much, which in fairness, could be down to how long each of the levels are. The boss theme is probably the best song on the soundtrack and I did enjoy listening to it while fighting them.

The game’s black and white presentation has both its benefits as well as its drawbacks. On the positive side of things, the color scheme helps the low poly 3D models look pretty good even if it lacks any sort of detail and with the help of the music, it also makes the adventure feel “relaxing”. I say relaxing within quotes as the presentation is also the biggest downfall Bird Game+ has.

The major issue with the lack of details in 3D models is there is also a lack of shadowing if any at all. This means there’s not much depth perception of where enemies and obstacles are, how close one part of the environment is to another, etc. Add all of these issues together and it ends up making the game unnecessarily frustrating to play.

A lot of the time I’d take damage for things I wouldn’t have seen coming because I thought they were a lot farther than what they actually where. Additionally, the game’s camera does a poor job of navigating through the environment; sometimes a foreground obstacle would pass through this camera and block the entire view.

At the bottom of the screen, there’s a black bar that indicates the bird’s HP. This bar isn’t very noticeable because of its awkward positioning and coloring. A dedicated bar located somewhere else would’ve helped the visualization of life gauge better.

I’m not sure as to why load times are as long as they are. When a player starts a level, the level timer starts but the actual gameplay doesn’t. Players have to wait ten seconds for the bird model to load. There’s also frequent stutters and frame rate issues in bosses and areas where the screen is filled with enemies.

There’s one other option for movement, motion controls. They can be activated using either trigger buttons (which in my opinion is one of the worst controller binding options I’ve ever seen); they work okay for the most part while in TV mode. Handheld mode, on the other hand, is a whole other story.  Players can’t resync the motion controls and you have to find that “sweet spot,” otherwise the controls would mess up and the bird would dive straight down into the water. Playing with motion controls in handheld mode was… painful, to say the least.

Throughout the levels, there are areas where a gust of wind pushes both obstacles and the bird himself towards a direction. The gameplay feature itself is great to mix up the gameplay, but it’s spread out frequently in each level and it becomes an annoyance after a few times, especially since it makes flying a lot more cumbersome than what it already is.

The idea of navigating through a linear path while avoiding obstacles seems like a solid concept to work with, similar to the StarFox games, but unfortunately, the visual and performance issues prevent the game from reaching its full potential. With how the game stands now, you’d be better off avoiding this title.