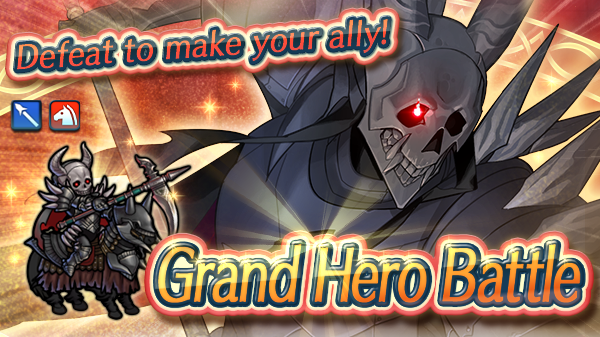 A brand new Grand Hero Battle has arrived in Fire Emblem Heroes! Death Knight: The Reaper, is a hero who debuted in the Fire Emblem: Three Houses game. As the Flame Emperor’s lieutenant, he seeks to fight only the strong. Defeat him to make him your ally.

All kinds of different Heroes have been summoned to Askr—some bright and cheerful, some dark and brooding. And now, here comes the Death Knight, taking the number one spot on my top ten list of Heroes I wouldn’t want to meet in a dark alleyway!

With that huge scythe he carries around, I can see why people call him the Death Knight… He looks like he’s about to do some grim reaping, that’s for sure.

It’s hard to say much more about Mr. Death here. No one really knows where he came from, and no one’s seen what he looks like under the armor either!

All we know is that he wanders the land at night, looking for a worthy challenger. Do you think he’ll find who he’s looking for in Askr?