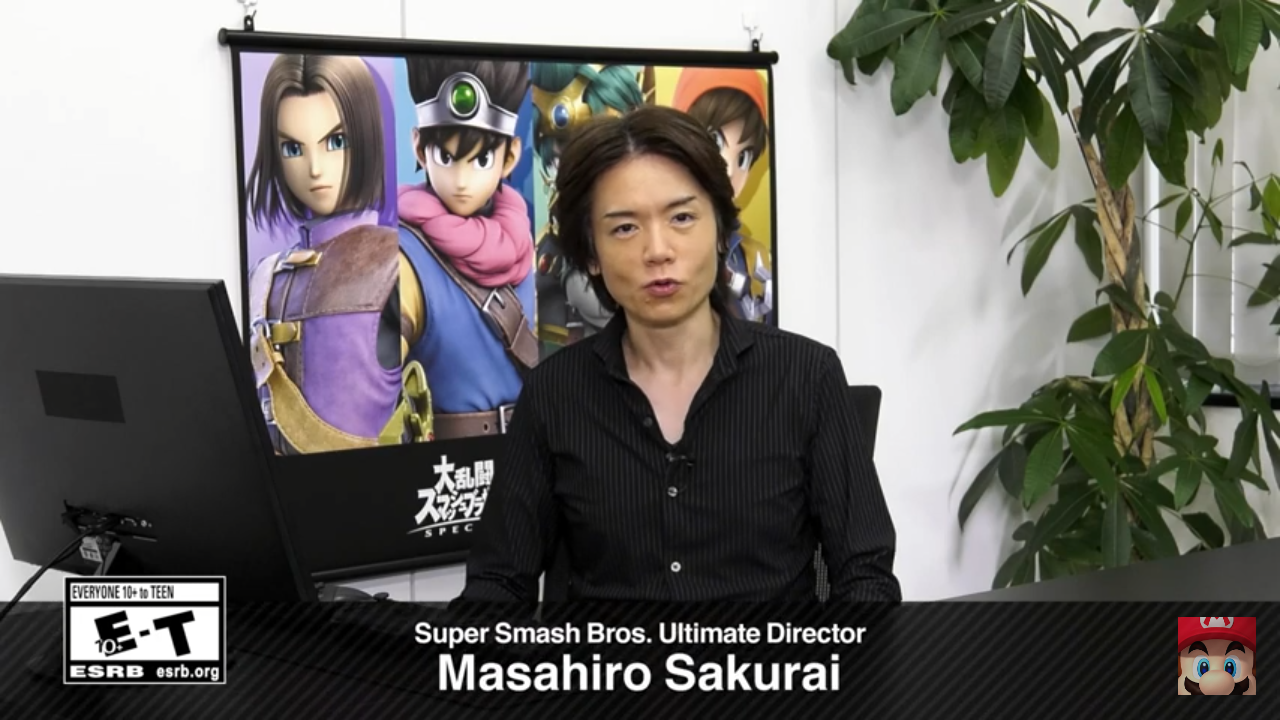 The Super Smash Bros. Ultimate presentation held by Masahiro Sakurai was uploaded to Nintendo’s official YouTube Channel today. The presentation was all about the next DLC Fighter joining Super Smash Bros. Ultimate, Hero from Dragon Quest. Sakurai also announced the new wave of Mii FIGHTER costumes based on Dragon Quest characters and the Version 4.0 update coming this week.

To change things up a bit, the Presentation was more like a livestream than most of Nintendo’s Direct Presentations. You can check out the video featuring Hero below. We also have the full official announcement from Nintendo as well.

REDMOND, Wash., July 30, 2019 – A Hero draws near! Starting later today, Hero from the DRAGON QUEST series enters the battle as a new playable fighter in the Super Smash Bros. Ultimate game for the Nintendo Switch system. In a new video, Nintendo not only showcased the Hero in action, but also unveiled the Yggdrasil’s Altar stage and several orchestrated music tracks from classic DRAGON QUEST games coming to Super Smash Bros. Ultimate. All of this new content will be available to players who own the Fighters Pass or purchase Challenger Pack 2 separately*. To view the video in its entirety, visit https://www.smashbros.com/en_US/.

“With the introduction of fan-favorite characters like Hero from the DRAGON QUEST series to the game’s expanding roster, Super Smash Bros. Ultimate continues to assemble the largest cast of iconic video game characters ever,” said Nick Chavez, Nintendo of America’s Senior Vice President of Sales and Marketing. “We love being able to engage Super Smash Bros. Ultimate fans through a steady release of exciting downloadable content, and look forward to continuing to expand on players’ game experiences on Nintendo Switch beyond launch.”

Hero enters the arena equipped with a sword and shield, and wielding familiar DRAGON QUEST spells like “Frizz,” “Zap” and “Woosh.” The character comes with additional alternate character designs that represent the main characters from several games in the DRAGON QUEST series. He can take the form of the protagonists from DRAGON QUEST XI S: Echoes of an Elusive Age – Definitive Edition, the latest DRAGON QUEST title coming to Nintendo Switch on Sept. 27; DRAGON QUEST III: The Seeds of Salvation; DRAGON QUEST IV: Chapters of the Chosen; and DRAGON QUEST VIII: Journey of the Cursed King. This is the first time ever that all four heroes from these DRAGON QUEST games are fighting together.

Players who own the Fighters Pass or purchase Challenger Pack 2 separately will also have access to a new stage, Yggdrasil’s Altar, which features the great mythical tree from many DRAGON QUEST games. The stage is full of moving platforms, which fly through different locales that DRAGON QUEST fans might recognize, and even features some familiar (slimy) faces in the background. Orchestrated music tracks from classic DRAGON QUEST titles will also be coming to Super Smash Bros. Ultimate alongside Hero and the Yggdrasil’s Altar stage.

Along with the release of Hero later today, a free software update to Super Smash Bros. Ultimate will also be available, which adds an in-game online tourney mode**, a “Very Easy” setting in the single-player Adventure mode and the ability to predict the winner in Spectate mode, among other features.

By purchasing the Fighters Pass, Super Smash Bros. Ultimate players will get access to five Challenger Packs as they release. Each pack includes a new playable fighter, a new stage and music tracks. Joker from Persona 5 is available now, with Hero joining today and iconic characters Banjo & Kazooie coming this fall. Two additional characters, who have not yet been revealed, are also part of the robust Fighters Pass.