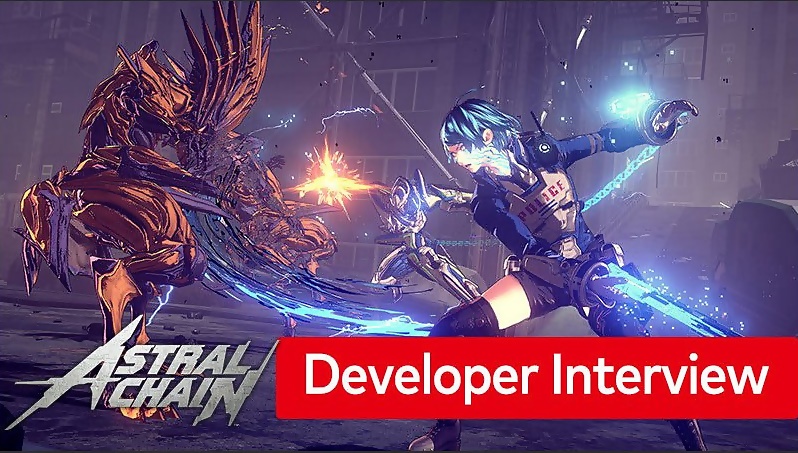 Nintendo has recently shared to their News Channel on the Nintendo Switch an interview with Director Takahisa Taura about Astral Chain. The game will be releasing next month and what better way to promote the game than to talk more about it with the people that made it. Takahisa Taura has worked on games like NieR:Automata and Anarchy Reigns as a game designer. For Astral Chain though, he was given the role of director.

In the interview which, we have transcripted below, Takahisa Taura talks about the differences between designing a game and directing one, how they came up with the combat system, Why they chose the futuristic setting and the most important question of all which, was never asked but answered… Can you pet the dog? Or in this case, Legion?

In, ASTRAL CHAIN, releasing on August 30th, you’ll explore a futuristic city, master a deep combat system by controlling two characters at the same time, and solve police cases to help out a humanity under seige (and, on ocassion, lost cats). We recently sat down with the game’s director, Takahisa Taura, to learn more about the game. And when you’re done reading, please check out the videos to see the game in action.

1) You’ve worked on many different games as a game designer in the past such as NieR:Automata and Anarchy Reigns. How is directing different from designing a game?

I started out as a game designer, but what you need to do as a director is different. As a director, before you start making a game, you need an original idea to take around to a lot of different people… and then get them to understand the kind of game you want to make. Finishing a game can also be a struggle. But, with that said, seeing the finished product is a completely different feeling [Than what you would have as a designer]. The sense of fulfillment is totally different.

2) How did your team come up with the combat system? Was it difficult to make it accessible to new fans while still making it challenging for experienced fans of PlatinumGames?

ASTRAL CHAIN has you controlling two characters at once, so people who are used to action games will be able to experience something they may not have played before. Enlisting the help of five different Legions will also be new and challenging to players of all levels. Since Legions are a separate entitiy, players can send Legion to do the fighting till they get the hang of things. There are also different difficuly modes the player can choose according to their skill, with one special mode called “Unchained Mode,” which is designed for action game beginners who want to enjoy the story and world.

3) Some people will be surprised this isn’t just an action game and also involves solving cases as a police officer. Can you tell us more about what the team hoped to create?

We wanted to creat gameplay where plating as a police officer, you’d run to the site of an accident or problem and then you’d investigate by talking to the people around the area. But there are other things along the way. We thought that this would be a natural way for the game to flow for the player.

We’re mindful of the fact that, as PlatinumGames, we make a lot of games where action becomes the focus and the player goes through a lot of action sequences, one after another. So, we wanted to make it stand out as something different by putting in different elements into this world.

4) What were the inspirations behind the sci-fi world and story that the team created?

Actually, when we first started making the game, we envisioned it as something where it would be set in a fantasy world where you’d be using magic to fight, but there are lots of different games that are like that. So, in order to make sure our game wasn’t lost among the ranks, we decided to make it different. It was a lot of trial and error, but what we arrived at was an action game that’s in a near futuristic world.

5) Finally, What is your favourite Legion?